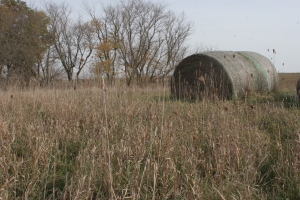 No deer ventured out of the woods this October morning to follow their well-traveled trail to the bean field, so my two-hour wait with my back propped against a round bale and my muzzle loader rifle across my knees could be considered a fruitless hunt. But some rewards of North Country deer hunting have little to do with deer.

As the sun rose above the horizon, an unexpected temperature drop slowly turned the heavy coat of dew on the grass to frost, changing it from glittering silver to pure white in the course of ten or fifteen minutes. This was not the first time I had witnessed this frost-at-first-light phenomenon but it was certainly one of the most beautiful and memorable.

We did not harvest hay from the 25-acres of fields on the hilltop of our farm this summer so the grasses, fescues and forbs grew unchecked and became intertwined in a thick, thigh-high mat of vegetation, especially on the southwest six acres we call the bluff-top meadow. Despite three weeks of drought at the end of summer this grassy mat has been sopping wet with dew when I ventured out several early mornings in October, soaking me and my bird dogs Sasha and Abbey to the skin in the course of our mile-and-a-half wake-up walk around the hayfields’ perimeter (my walk is 1.5 miles; their run is probably six or seven miles).

Over the past month we discovered three primary game trails leading from the woods, snaking across the meadow, and ending at the sagging section of barbed wire fence that separates our shelter belt of red cedar trees and nine-bark shrubs from the neighbor’s harvested and barren bean field. The heart-shaped hoof tracks atop gopher mounds, the much-grazed alfalfa and bird’s foot trefoil plants, and the scattered “goat berries” droppings along the trails told me they were in use daily. Better proof was that the dogs and I had sent does and their grown fawns fleeing across the meadow on these paths a few mornings.

Sasha and Abbey were confined to their kennel runs on this first day of the muzzle loader season for deer as I set out on the long coffee-and-ibuprofen fueled walk from the house to the hunting grounds. My plan was to climb into a tree stand overlooking the meadow at the very edge of the woods an hour before the first light of dawn, but I discovered I had forgotten my flashlight and conceded it would not be wise to attempt the climb in the dark, loaded with gear and encumbered by thick clothes. I did that two years ago and dropped and lost the plastic tube that holds the rifle’s primers. Of course a six-point buck walked under my tree an hour later while I sat there with a loaded but useless muzzle loader.

Much as I enjoy them, there are times I curse primitive weapons seasons.

But this frost-at-dawn morning of October 17 more than made up for all the frustrations and disappointments that can accompany hunts with a bow or black powder rifle. I was on the verge of sleep when a broken-glass sparkle on the right edge of my peripheral vision jolted me wide awake. The night’s dewfall was freezing. This frosting of the hayfield progressed from southeast to northwest, a sort of encroaching shadow in reverse that lightened the grass tops from sullen gray to glittering white. The transformation of dew to ice crystals was followed a half hour later by a gold burst of sunlight over the horizon that spread a two-color rainbow of red and orange across the frosted field. Gentle gusts of wind dislodged showers of multi-colored ice chips that instantly turned to water droplets when they stuck my face.

This is why we go on morning hunts, I reminded myself as I gulped down this much-needed dose of aesthetic beauty to cure my grumpy curmudgeon pouting about the miseries of an hour of shivering in the cold, aching back and rear, sour taste of bitter coffee in my throat, and no deer.

We often, perhaps too often, reflect only on the more obvious rewards of the hunt. True hunters love not the shooting and killing, but the excitement: the adrenaline surge that lifts our senses to a higher plane when the deer walks out of the shadows. We also take quiet pleasure and satisfaction in the planning, scouting, setting up tree stands, preparing gear, sighting in and practicing with rifle and bow. And we like the trappings of the game: selecting favorite camo clothing, swearing by (probably dubious) scent and scent-killer sprays, sharpening broadheads and knives, replacing batteries in headlamps and flashlights…

But the greatest pleasures and rewards of the hunt are wrapped up in our love of the outdoors and all of its unbelievably fascinating wonders. Just being there. Being part of it. Seeing it as participants, not observers. This is an emotion so hard to explain to non-hunters, but so easy to evoke in conversations with fellow hunters.

A couple hours spent shivering in the cold on a no-deer morning will be forgotten in a few years. That vision of the silver-white, gold-red-orange rainbow wave of frost washing across the North Country meadow at dawn – that will be with me until they take me away to the bone yard.

That’s why I hunt.

More stories about hunting and life in the North Country are published in my collections of essays, Crazy Old Coot and Old Coots Never Forget, and my novel, Hunting Birds. Both are available in Kindle and paperback editions at Amazon.com.