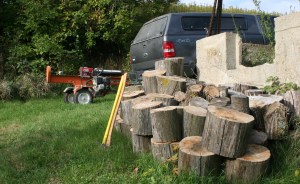 The first autumn we rented the hydraulic splitter was life-changing. I now swing an axe, maul or sledge hammer only in extreme circumstances; a sub-zero night when the rural electric co-op’s grid system goes down, for example.

Rich is having enough cash in your pocket to rent a hydraulic wood-splitting machine.

If that seems to you to be an overly modest standard for personal wealth, you have probably not split a year’s supply of firewood with maul, sledge hammer, wedge, and axe. Manually cutting, stacking, splitting, hauling, and re-stacking several cords of northern hardwoods is an exercise that raises awareness of small luxuries. A 26-ton log splitter, for example.

Splitting all our firewood by hand for more than 20 years granted my ego a sense of smug superiority over the bourgeois town folk who heated their homes with a mere twist of the furnace thermostat, those soft-lived parasites who were speeding climate change by burning fossil fuels and pumping noxious emissions into the pristine atmosphere of the North Country. Back surgery, rotator cuff rehabilitation, arthritis, and diminished physical strength brought on by an accumulation of years changed my attitude. We humbly bought an LP gas furnace to replace the wood-burner in the cellar, although a wood stove in the kitchen still provides about half our heat through the winter months.

As a result, wood splitting chores in September and October dropped from nine cords to four or five, but it was still taxing labor. Before the task was half done my lower back was protesting, and three years ago it went on work-stoppage strike and demanded compulsory arbitration at the Mayo Clinic Back Pain Management Center. That was the first autumn we rented the hydraulic splitter, and it was a life-changing revelation. I now swing an axe, maul or sledge hammer only in extreme circumstances; a sub-zero night when the rural electric cooperative’s grid system goes down, for example.

At first the hydraulic splitter and I had a mutually distrustful relationship. It performed without enthusiasm because I would not advance the throttle to the recommended engine rpm speed for fear that it would go berserker and launch ragged splits spear-like from its deck. As we got to know each other better, things have improved. Now when I rev up the engine, slam a particularly evil-looking piece of red elm onto the deck, and push the operating lever forward I get a perverse pleasure from watching the wedge on the tip of the ram split with an irresistible force the twisting and groaning log, remembering how many full-swing whacks of an eight-pound hammer it used to require to split these brutes. Splitting three cords of wood on this October afternoon was child’s play, quite literally; I take child-like joy in the work, not unlike those early days of learning to ride a bicycle or fly a model airplane.

If I remember correctly, the equipment rental shop charged us $58 for the day’s use of the splitter. The cheapest trip to the clinic resulted in a medical bill of more than $800. I use this economic logic to justify the eco-system damage caused by burning a couple gallons of gasoline, but the fun of operating the splitter is a far more persuasive argument.

The danger is that I will be seduced by my new-found love of power equipment. A DR Mower with a bush-hog deck was about the limit of my involvement with mechanical devices before the hydraulic splitter convinced me that much of the heavy work on the farm that I have insisted on doing by hand could be accomplished in less time – and with considerably less effort and pain – if I were to acquire, say, a Kubota tractor with dozer blade, belly-mount mower deck, snow-blower attachment, and maybe a hydraulic bucket. A fence post auger would also be a handy device. And maintaining the drainage ditch along the driveway would be so much easier with a backhoe. A small one, of course.

I concede that buying all these machines would be a costly proposition, and even more financially burdensome would be building a shed to store it. But I have pointed out to my beautiful blonde wife that renting a backhoe for a day or two would not be onerously expensive and could be a sort of test of my ability to make the transition from manual laborer to skilled heavy equipment operator. The first trial run could be repairing the driveway culvert that was damaged by June’s flood, I suggested.

“Darn!” she said. “I called Ramstad Construction yesterday and made arrangements for them to do the work on the culvert. Sorry.”

Frankly, she did not seem to be much disappointed in my missed opportunity. She did say that if I took down the two dead elm trees at the top of the driveway I could rent the hydraulic splitter again in November.

Maybe I’ll get the 45-ton model this time.

More stories about life in the North Country are published in my two collections of essays, Crazy Old Coot and Old Coots Never Forget, and my novel, Hunting Birds. All are available in Kindle and paperback editions at Amazon.com.

3 Responses to Doing the splits