Dogs and people approach things a little differently. For example, I am very fond of pizza but have never had a desire to roll in it. Rolling in more or less odorous things may be somewhat mysterious but I assume the idea is to collect a choice odor and take it along.
– from the essay Roller Derby in the book titled Bird Dogs & Bird Guns by Charley Waterman (1913-2005)

Of the dozens of canine behaviors that passeth all understanding the most curious is my dogs’ fascination with rolling in coon pooh. Feces of the common raccoon (Procyon lotor) is vile and disgusting stuff, from a human point of view, but it is apparently the essence of ambrosia to a dog.

Of all the larger mammalian species of wildlife that roam the woods and fields of our farm, raccoons are among the most plentiful. We did not intend to develop habitat to benefit raccoons, but inadvertently we created a utopia for the masked raiders: deciduous forest, weedy grassland, nearby corn and bean fields, easily accessible vegetable gardens, and a compost pile to help them through harsh winters. In this paradise they have gone forth to multiply in impressive numbers.

Although we enjoy watching their antics and put up with their pilfering (rural homeowner tip: tip store dog food in tightly sealed metal cans), we find them to be rude and unappreciative guests. Especially in their waste elimination habits.

Raccoons poop copiously, frequently, and pervasively. They lack the common courtesy of the housecat to cover their droppings, choosing instead to leave them exposed and reeking in the middle of walkways, lanes, driveways, and other well-traveled paths. Seldom is the morning walk with the dogs when we do not discover fresh piles of raccoon dung. It is easy to identify because, 1) its contents are always a remarkable collection of half-digested food stuffs; 2) its fetid smell can be detected at considerable distance even by a human nose; 3) at least one and sometimes two dogs will be rolling in it.

Of the many omnivores native to the North Country the raccoon is arguably the most omni. A typical sample of its pooh may contain nestling birds and egg shells, various fresh vegetables from the garden, carrion of a road-killed rabbit, sprinkles of field corn, locusts, grubs, and other insects, bones and fur of field mice, alfalfa sprouts, dried blackberries, mushroom puree, and several chips of well-rotted wood that the coon decided would be good for dietary roughage and trace elements.

The raccoon’s digestive system processes all of this fare, some to a greater and some to a lesser extent, extracts its nutrients, mixes the rejected matter in haphazard fashion, invests it with acids, methane, ketones and other natural hydrocarbons, and discharges the resultant toxic waste in multi-layered piles. Huge piles.

A typical raccoon of the North Country weighs 10-15 pounds; an exceptionally large old boar might reach 20 or even 25 pounds. But for such a small animal their pooh piles can rival those of a hundred pound bear. Except bear pooh is not as putrid, and something about its origins must warn off my dogs because when we encounter it the hair on their nape and shoulders stands erects and they retreat from the smoldering pile in a three-quarter posture that says “None of that for me, thanks!”

The scent of fresh coon pooh, on the other hand, sends my French spaniels into paroxysms of excitement and happiness and they rush to sniff, taste, and then roll in it. Sasha is the best, or perhaps better said the worst, coon pooh roller of the 13 bird dogs who have shared my life and adventures. Intoxicated by the scent, she ignores my commands, whistle blasts, and frantic pleas as she approaches the pile, lowers one shoulder, flip athletically onto her back and twists and turns and squirms joyfully to coat her back from neck to hips in the foul stuff. If she has time, she likes to turn over and grind her neck and chest in the pile, packing her collar buckle and name plate with dollops of goopy pooh.

Disciplining her is useless. You might as well put me in time out for drinking beer. I’m going to go right back and do it again. 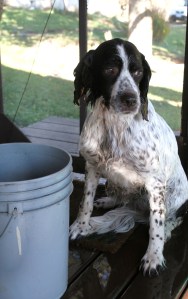 Most days I put her back in her kennel run for a couple hours while the pooh dries, then brush out the hardened but still repulsive chunks with a pin brush. I wash her with a bucket of warm soapy water and soft brush, rinse and dry, and repeat the procedure in the late afternoon. Over the course of the summer, this has been an almost weekly regimen.

Although she appears to regret the loss of the enticing coon pooh odor, Sasha likes the attention and grooming so I am probably giving positive reinforcement to negative behavior. Trying to deodorize her with perfume-scented soaps or sprays is counterproductive. She detests the flowery smell (can this dog really be of French ancestry?) and will at the first opportunity roll in something to neutralize it – even the relatively innocuous piles of deer droppings on the edge of the yard will suffice in a pinch.

For years I wondered “Why?!” but despite much observation, thought and research I have concluded I will never find the answer. A supposedly reputable dog behavior website and a few books on dog training suggest that pooh rolling is genetically locked in a dog’s behavior because it wants the stench to mask its own body odor from prey animals while it is hunting. Think about this. Two deer are sleeping on the edge of a forest when one is startled awake by the drifting smell of coon pooh. “Hey,” the deer tells his buddy, “do you smell something weird creeping up on us?” His partner sniffs and says, “No worries; it smells like 50 pounds of coon pooh smeared on wet dog hair. Nothing dangerous.”

You draw your own conclusions. I ain’t buying that explanation.

Dogs have their own system of logic so I just accept that Sasha is entitled to her mysterious reasons for rolling in pooh. Maybe it’s as simple and uncomplicated as why I grow a beard: it adds to my character and makes me recognizable in crowds.

But I have concerns. Sasha is teaching Abbey that rolling in coon pooh is appropriate behavior, something any self-respecting bird dog would do at every opportunity. This morning I came upon Abbey cautiously sniffing a fresh lump. “No!” I shouted. She slowly lowered her neck into the stuff and gave a good rub, then rolled one shoulder into it.

“Pooh!” I swore. Or some version of it, anyway.