After a recent comedy of errors performed in the course of a mid-morning pheasant hunt in the North Country (read Seven shotshells), Abbey and I were due for a karmic balancing act, an opportunity to enjoy an exciting and uplifting day in the wild to offset that dismal showing. Thanks to the efforts of 30-year friend and hunting companion John Beard, our bird hunting universe is back in balance. 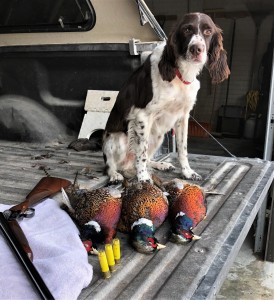 Pheasants are scare this year in our part of the upper Midwest, or as the Department of Natural Resources public relations people like to say, “populations are spotty.” One’s chances of finding a “spot” that has a good number of roosters is about the same as rolling three consecutive sevens with the dice, but Old Coot bird hunters are an optimistic lot who believe the next small piece of Conservation Reserve Program (CRP) grassland will yield a bounty not seen since the explosion of  Phasianus colchicus in the 1960s.

As we loaded squirming dogs into the travel boxes in the pickup at dawn’s first light, John’s Vizsla Bella and my French spaniel Abbey, John told me that he had done some calling the evening before and received permission for us to hunt some private land that could be the Shangri-La of which we dreamed.

“I drove past it last week, and it looks really good,” he said. “The snow has flattened the cover in some of it, but most of it is standing.”

“Have you hunted it this year?” I asked.

I tempered my enthusiasm.

The first place we hunted was so-so cover, up a steep ridge and into a long shallow draw that widened into a frozen cattail marsh. John told me that before I had crested the ridge Bella had flushed more than 10 pheasants that I had not seen. The marsh had some pheasant tracks, but Abbey showed birdy only once.

We hiked to a nearby piece of weedy ground, a wet slough between two harvested cornfields. John took the north side, I took the south, and before we had gone a quarter mile Abbey’s tail was announcing “Birds. Birds! BIRDS!” She tracked, back-tracked, followed a well-used deer trail about 50 yards, and went on point in a matted down clump of marsh grass. I stomped around in front of her, kicked a few likely looking tangles, and then released her from point with a “Go easy!”

I took one more step and…

Every hunter has his own special definition of the supreme moment of excitement in the field. For some, it may be the appearance of a 12-point buck approaching his tree stand. For others it may be a flock of mallards turning to a well-sounded duck call and coming into the decoy spread, wings cupped and feet down. For yet others it may be the explosive burst of a covey of quail from a brushy fence line, or a pod of sharptail grouse from a grassy swale in the prairie. For me, it has always been, and always will be, the squawking, wings-hammering, rocketing takeoff of a rooster pheasant in heavy cover.  Grant me that a few times in a day’s hunt, and I am on the threshold of paradise.

A canny old bird, this rooster flew low and banked with the wind to escape, but to no avail. I knocked it down and Abbey was on it in seconds. She rooted it out from under the snow-covered grass and held it up for me to see. “Come and get it!” she said. We’re still working on the retrieve-to-hand part of her job. But not today. I walked to her and took the pheasant from her, and we spent a few minutes looking it over.

“Aren’t they incredible birds?” I asked her.

“Dragons,” she corrected me. “They are dragons, and we are heroic dragon slayers.”

I put the rooster in the game bag of my vest, reloaded the shotgun, and looked up to see a birdy Abbey tracking fresh scent. We followed this unseen but odoriferous pheasant a long way, a very long way, before it came to a two-foot snowbank at the edge of the grassy draw. Its only choices were to hide or to fly. It hid beneath a snow-flattened thatch of broom weed. It could have escaped me, but not Abbey.

Point, flush, shoot – and we had our second rooster of the day. This one had flown across the snowbank and crashed into a harvested bean field, flopping and trying to run. Abbey pounced on it catlike, picked it up, looked at me on the far side of the snowbank, shrugged, and carried it to hand. Maybe she knows the old man is not good at scaling obstacles.

“Two perfect birds,” I said as I put it in my vest. “Maybe we should call it a day.”

The final hunting ground of the morning was the best: 40 acres of rolling CRP with corn fields on two sides. Pheasant sign was everywhere. The problem for the dogs was not finding scent; the problem was being overwhelmed by too much scent. Every hundred yards or so pheasants would flush wildly ahead of us. A group of three birds, then five, then seven. John shot two before Bella, in just her second season of hunting these uncooperative birds, went a little crazy. There was much whistling and shouting.

“Thank goodness I’ve never had a dog that acted like that,” I told him. “Except Annie. And Pete. And sometimes Suzie.”

Abbey and I split off and took a circular course back toward the pickup. Along a hillside, two roosters flushed wild, side-by-side, and flew across in front of us left-to-right, a sporting clays “true pair” at 40 yards. I mounted the gun, but did not shoot. Not confident in my long-crosser shooting these days. Abbey gave brief chase but I called her back with the whistle. We walked up the hillside and she locked into a rock-solid, belly to ground point.

“Those just flushed,” I told her.

She did not bat an eye.

I stepped past her nose, the dragon came roaring out of the grass, and we had our third and final rooster of the day. Sing praises to the red gods. Sing great praise to Abbey.

We walked a beeline back to the truck and put up eight more birds on the way: six hens and two roosters. No, I am not telling anyone the location of this CRP field. Not a hint.

Back in the cab of the pickup I opened the lunch bag. “I have six slices of venison summer sausage,” I told Abbey. “You can have three.”

More essays and stories about bird dogs, bird hunting, bird guns, and life in the North Country are published in my six collections of essays, available through Amazon.com at  Jerry Johnson Author Page