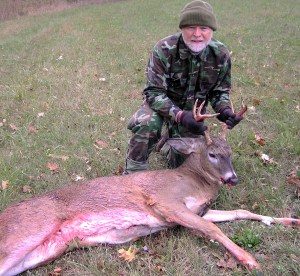 Sometimes a buck hit by an arrow will stamp and snort and then go down in a place accessible by pickup truck. A doe? Never.

After an hour’s labor and a gallon of sweat, I had reached a profound and intimate understanding of the roots and derivation of that oft-used phrase, “My butt is dragging.”

Standing silhouetted on the edge of the hay field at the top of the bluff she was a large whitetail doe, maybe 120 pounds. By the time her run-and-slide down the face of the bluff had ended, she weighed at least 250 pounds. Field dressed.

Impossible as this instant size increase may seem, I can swear it is true, because I had to haul her carcass 200 yards, one yard at a time, back up the bluff. Through the brush. Over leaf-covered limestone scree. In the dark. On a warm night.

Sometimes, deer hunting is such a drag.

The west 20 acres of our farm is a steep limestone bluff. Very steep. Vertical in several places. Why these cliffs are called “bluffs” in our part of the North Country is a mystery to me. The word “bluff” suggests a gentle grass-covered hill. These rough, rocky precipices are anything but gentle.

Karst topography limestone formations are the bones of the earth here, and that skeleton of stone juts through a thin skin of humus on the face of dozens of sheer, wooded bluffs that are beautiful to behold but a misery to hike. You have to be a little crazy to hunt them. Maybe a lot crazy. I hunt deer on these bluffs every fall.

After a forestry improvement project six years ago, the west face of the bluffs on our place has become an open woods of mature and half-grown walnut, oak, maple and cedar trees standing amid a jumble of the fallen trunks of the “junk” trees that were girdled and died: box elder, elm, ironwood, birch. The mature trees have not yet interwoven their uppermost branches into a full canopy, so there is a thick undergrowth of wild raspberry, gooseberry, nettle, burdock, prickly ash, buckthorn, wild grapevine, and dozens of other woodland plant species that flourish in the mixed sun-and-shade habitat of a regenerating hardwood forest.

Whitetail deer flourish here, too. There are a few big bucks hiding in there, but most of the deer are does and their fawns, sheltered and safe in this woodland tangle. Each October evening this year, six to a dozen big does come cautiously up the bluff and wander out into the hay field to eat clover and alfalfa, teach the survival skills of vigilance and flight to their nearly grown but still careless fawns, and play the mating game with the four dominant bucks that have staked out competing breeding grounds around the edges of the woods.

No longer a trophy hunter, I do not locate any of my four archery stands near the scrapes and rubs where I might have the best chance of taking the ten-pointer, this year’s alpha buck. Venison is what I am after, so I scout and set my stands near the trails the big does most frequently use, two stands just beyond the hay field fence, right at the top of the bluff.

Last week as I sat twelve feet above a well-traveled trail, trying to be still and silent atop a ladder stand strapped onto a walnut tree, three of the bigger does tempted me to take an easy shot. Two of them had twin fawns, nearly grown, and the other had a single fawn with the faintest traces of spots still visible in its coat. The largest of the three loitered seven yards from my tree, but I did not draw the bow.

My restraint had nothing to do with anthropomorphic compassion. Walt Disney would be aghast at my callousness, I suppose, but killing a whitetail doe with grown fawns brings no tears to my eyes, which see these eight deer as part of the rampaging gang of ungulate vandals that devour dozens of our newly sprouted saplings each year. Besides, they taste good.

No, my reluctance was due to harsh experiences that have taught me not to shoot a doe that is closely mingling with her social club – unless we have come to that now-or-never phase of the bow hunting season. At the sound of the bowstring and the arrow strike, the doe will jump and spin, but unlike a testosterone-fueled buck, which will dash off ten or twenty yards and then stamp and shake his head and snort in rage at this assault that must have somehow been inflicted by one of his rivals, the group of does will run and run. And as long as the rest are running, the mortally wounded doe will run with them.

An arrow-wounded buck will often stagger off toward the woods and collapse at the top of the bluff, where a short drag will take him to a place accessible by pickup truck. A doe? Never. Invariably, she will run far down the face of the bluff, then crumple and slide until her descent is arrested by a tree trunk.

Then the fun begins.

Field dressing a deer on a 45-degree slope is a skill that can be acquired only through frequent practice. I regard myself as something of an expert in the craft. I have lost a knife and a Leatherman tool over the years, but I have never lost a finger. Twice I have sliced my left index finger to the bone, but it’s still there. So far.

The heavy work starts when you have tied the drag rope around the neck of the dressed deer and gotten it turned in the right alignment for a long, uphill pull. By this time the night will be pitch dark and your flashlight will be flickering and dimming as its batteries die. In a way this is helpful because you now have to go straight up the bluff, unseeing, instead of being diverted by side trails and switchback routes that will only lengthen the drag. On the other hand, you will not see the skin-ripping clumps of gooseberry and wild raspberry until you plunge into the midst of them.

My most memorable doe drag, the deer that ballooned from 120 to 250 pounds on her tumble down the bluff, pushed me to the brink of vegetarianism. Starting from a shelf on the steepest section of the slope, I sat facing downhill, grabbed her ears, and pulled her head into my lap. Then I half-stood, scooted my rear end back a couple feet, braced my heels as best I could in the wet leaves and loose limestone, and pulled her to me again.

This was a 150-yard backward drag, sitting, a yard at a time, up a steep and slippery slope. Every third of fourth pull, my feet would go out from under me and we would slide back down a ways, so it was literally a “two steps forward and one step back” process. After an hour’s labor and a gallon of sweat, I had reached a profound and intimate understanding of the roots and derivation of that oft-used phrase, “My butt is dragging.”

To add insult to injury, when I finally pulled her into the hay field at the top, I could not lift her into the box of the pickup. I was exhausted. With the help of my patient and long-suffering wife, and a come-along pulley and cable, the deer was finally hoisted into the truck. There, she appeared to weigh about 120 pounds again.

With the possible exception of a hammering I took in a welterweight bout some forty-five years ago, I do not remember a time when I was so severely whipped but could still claim winner’s rights.

There must be a lesson in this for me, but I am still failing the course. Because tonight I am going out again to climb into a tree stand on the top of the bluff and hope that a big, unwary – and solitary – doe comes by.

Maybe this will be the one that runs out into the middle of the hay field to expire. Otherwise, this year’s bow hunt will once again be a real drag.

If you enjoy posts on my blog, Dispatches from a Northern Town, you may like reading my books, Crazy Old Coot, a collection of essays about bird hunting, bird dogs, bird guns, and the hunting life in the North Country; and Hunting Birds, a rowdy and hilarious novel about a murder in small town Minnesota. The books are available in both paperback and Kindle editions at Amazon.com.

3 Responses to It’s a drag