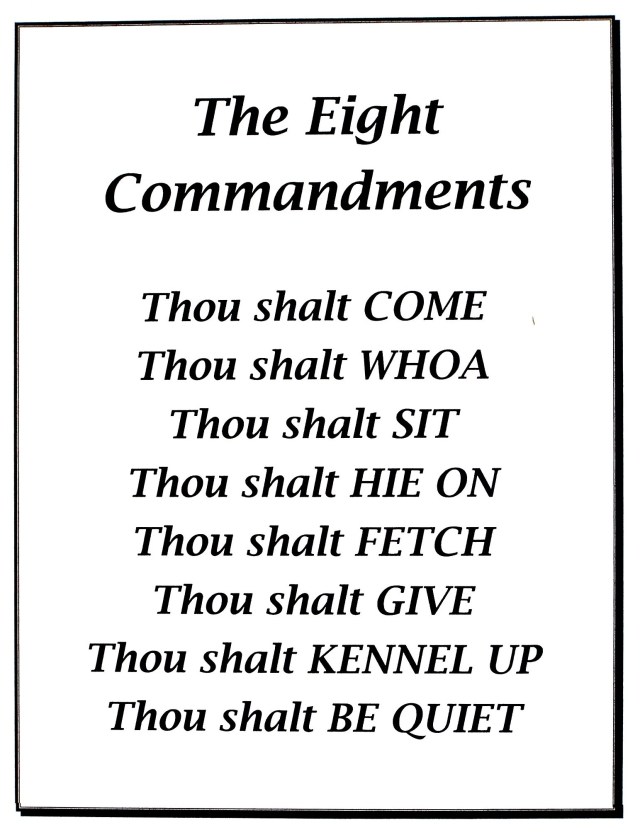 O Bird Dog, companion and partner of man, when thou heareth the voice or whistle of thy master thou shalt listen and obey The Eight Commandments.

Rick Smith, a professional trainer that I regard as one of the best in the business, has said that a bird dog only has to respond to three commands to be a good hunter. The dog has to come to you, go with you, and be still.

For some bird dog owners that is probably true. In the field, if a pointing dog will go where you want to go, come when you call, and “whoa” on command, you can have a successful day’s hunt. That is assuming the dog has the talent and desire to do what comes naturally: cover the ground, use its nose, point, stand staunch, and retrieve.

What else does the dog need to know, really?

For a hunter who owns a dozen or more pointers and setters and hunts bobwhite quail on plantation fields in the Old South or the wide open spaces of Texas or Oklahoma, I suppose that is true. I have taken part in a few of those hunts, and it is impressive to see those high-powered, hard-running pointers cover the ground, two pair down, four more pair waiting in the crates on the truck for their turn. The hunters follow, riding on a high-clearance four-wheel-drive rig, climbing down to take shotguns from the rack when the dogs locate a covey.

Come evening, the dogs are checked nose-to-tail (and especially feet) for cuts and scrapes, brushed, fed, and put back into their kennel runs out-of-sight and out-of-mind until the next day’s hunt. Just like the four-wheel-drive truck.

Most of us do not hunt birds in that classic plantation style, and we have a different type of relationship with the one or two bird dogs we own. Our dogs are less “employee” and more “family.” We hunt our dogs three or four months of the year, but we live with them twelve months a year. So I advise tyro owner-trainers to teach the commands that will assure they have a dog they can both hunt over and live with.

Your life-with-dogs in the field and in the home will be more enjoyable and much less frustrating if your dog will honor The Eight Basic Commands: COME, WHOA, SIT, HIE-ON, FETCH, GIVE, KENNEL-UP, and BE QUIET. The dog must not only recognize the commands but also obey them, unfailingly.

There are a few more “citizenship” commands that every dog learns early on. NO and GET DOWN, for example, are part of training from about eight weeks of age. If you have the same redneck roots as me, you will also use several command words that are not found in any dictionary, words such as NYARN and DAIRNT-YOO and of course GIT. All indispensable for behavior modification sessions.

For field work you will teach your dog several other commands that will help it become the best hunting partner it can be. You will want to train the dog to obey the words HEEL, GET BACK, OVER, HUNT DEAD, GO EASY, LEAVE IT, and perhaps a few more terms the two of you work out for better teamwork. By the time your dog is in its third or fourth hunting season, you two will have developed a twenty or thirty word vocabulary of cooperation.

Remember, you are not having a dialog with your dog, you are giving orders. Dogs do not speak English, not even the English breeds (although I once knew a border collie that was fairly fluent in both Scots Gaelic and Italian.) And they cannot understand the convoluted human reasoning behind your instructions. They act based on word recognition and conditioning.

I do have a hunting buddy who carries on continual conversation with his dog, Missy, while hunting and she seems to enjoy this. Not that it in any way affects her actions, but it provides her with both location of his position and encouragement that he is working to her satisfaction. As far as command words, he has but one: GODDAMMITMISSY. Depending on inflection, resonance, volume, and tonal emphasis, it seems to serve for a dozen of my command words, but not being as perceptive and intuitive as Missy, I cannot always determine which one.

Both effusive praise and stern lecture do have their place, however, in the training and obedience game. A dog has two motivations for obeying instructions: desire for reward and fear of punishment. (Exactly the same as humans, now that I think about it.) Many’s the time I have grabbed a dog by the collar when it has intentionally and knowingly disregarded an order, and I excel in giving scoldings more degrading and scathing than any sermon delivered by an Irish parish priest.

On the opposite side of the coin, the training word I use a hundred times more frequently than any of The Eight Basic Commands is the phrase that gets the absolute best response:

4 Responses to The Eight Commandments