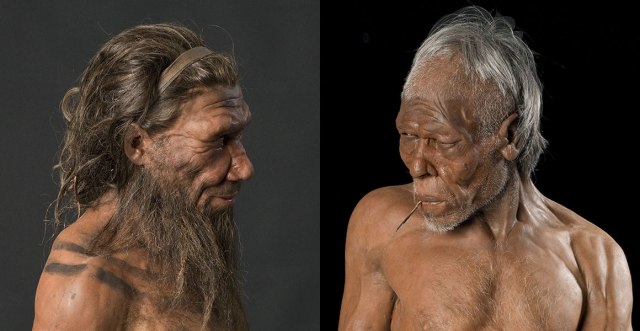 Ancient hunter-gatherers mastered a very wide variety of skills in order to survive, which is why it would be immensely difficult to design a robotic hunter-gatherer. Such a robot would have to know how to prepare spear points from flint stones, find edible mushrooms in a forest, track down a mammoth and coordinate a charge with a dozen other hunters, and afterwards use medicinal herbs to bandage any wounds. However, over the last few thousand years we humans have been specialising. A taxi driver or a cardiologist specialises in a much narrower niche than a hunter-gatherer, which makes it easier to replace them with AI.
From the book Homo Deus – A Brief History of Tomorrow by Yuval Noah Harrari

We were much happier before the curse of civilization. When we lived as clans of prehistoric hunter-gathers we were better off.

Before you scoff and launch into a long list of the material comforts we would be denied without the progress of civilization, I will remind you that civilized existence has been our plight for at least 10,000 years, and until most recently very few of those material comforts have been available to us. Only about 300 years, as a matter of fact, since the invention of the steam engine and the substitution of fossil fuel power for human or animal power. That is about three percent of civilization’s run time, and it appears we will not surpass the four percent mark because of the carbon dioxide we have pumped into the Earth’s atmosphere through the burning of those fossil fuels.

Humankind has been around for about 300,000 years, according to anthropologists, since homo sapiens evolved from earlier hominins and arose as anatomically modern humans. If you want to quibble that “human” should be defined more narrowly as the creature that emerged in the Upper Paleolithic Age, about 50,000 years ago, I won’t argue. But Denisovans and Neanderthals probably ranged across Europe and Asia as hunter-gatherers for more than 400,000 years, and being a phenotypic Neanderthal, I advocate for inclusion of those peoples as humans.

However you choose to define humankind, we have been around for at least 50,000 years. For the first 40,000 we were free of the miseries of civilization. For the succeeding 39,700 years we traded Esau’s hunter-gatherer life for Jacob’s settled agricultural life. It was an unfortunate bargain. (Dispatches from a Northern Town – Jacob and Esau)

Esau and Jacob, if we interpret the bible correctly, represent the world-changing conversion from nomadic tribe to the settled farming village. Neolithic man chose to plant, harvest and store Jacob’s “lentils” and ceased to hunt and gather Esau’s “venison.” We chose the cultivated field over the untamed wilderness, the city over the camp, the security of planning and preparation over the freedom of the wild with its uncertainty, chance and randomness. Things have not gone well for us.

We need some rough definitions here. Civilization is any society that is characterized by social division between a ruling class and a working class, a system of communication (writing and records), domestication of animals, and a separation from and intention to control natural environments. There are attendant shackles: usually slavery, specialization of labor, mandated ideologies (religion), taxes, dependence on farming, hoarding of resources, dense populations, and concentration of power. Add famine, disease, and war.

Definitions can be slippery. Was ancient Egypt a civilization? Certainly. Was the Hun nomadic tribal society in the time of Attila? Well, maybe. Anthropologists generally identify three types of societies:

Hunter-gatherer clans which are egalitarian

Herder-pastoral tribes and societies which usually have inherited social classes: chiefs and commoners

Civilizations which have an agricultural base, cities, specialization of labor, complex social hierarchies based on ownership of land or property, writing and records, organized religion, and institutional governments.

So into the Neolithic Age we stumbled, and we “advanced” into civilization. But did civilization improve humankind’s condition? Regrettably, it did not. In our time as hunter-gatherers, for perhaps the prior 300,000 years, we were undoubtedly taller, stronger, healthier, better nourished, longer-lived, and happier.

We tend to believe that paleolithic hunter-gatherer clans were none of these things, compared to civilized societies. That is untrue, until the past 50-75 years. Lifespan is difficult to determine, but for paleolithic peoples it was probably 50-55 years, perhaps as long as 60. When bronze age and iron age civilizations arrived, lifespan decreased to 28-36 years. In Classical Greece, 37-41 years; Classical Rome, about 50; Medieval /Islamic era, about 35; 18th century England, 33-40; 18th century France, 28-30; 18th century China, 40; 18th century Japan, 41. Lifespan did not exceed that of the era of the hunter-gatherer clan until late in the 20th century. In 1900 the world average was 31, in 1950 it was 48,

Taller, stronger, healthier? When homo sapiens appeared as the dominant species of hominin, males were about 6 feet in height, females somewhat shorter. About 10,000 years ago, when humans were herded into agricultural-based societies, male height decreased to about 5 feet, 4 inches, females even shorter. From 1400-1500 CE, average height for European men was 5 feet, 5 inches, shorter for women. Today, average height for European men is 5 feet, 9 inches; still shorter and less robust than our paleolithic ancestors. The historical reason has been poor nutrition and disease.

Happier? Anthropologists estimate that the number of hours prehistoric humans devoted to hunting and gathering each day would have been about four – about 1,500 in the course of a year. Through humankind’s 10,000-years of civilization, humans have worked 10, 12, 14 hours each day – more than 4,000 hours in the course of a year. That’s 2,500 fewer hours each year to devote to family, friends, music, art, spiritual life, contemplation, the natural world.

I mentioned the invention of the steam engine and the subsequent exploitation of fossil fuels. In 1698, the engineer Thomas Savery created the steam engine as a means of pumping water out of mine shafts. Over the succeeding 322 years the quest for power unleashed incredible changes in civilization. In the Industrial Age the machine driven by fossil fuels has been a cruel taskmaster, but the true advances in civilization only date back to that time. We no longer live in dread of famine, disease, and war – at least not to the extent that humans have feared their ravages over the previous 10,000 years of “civilized” societies. The average lifespan has at last exceeded that of the Paleolithic Age; worldwide, it is estimated to be 72.2 years.

But we have paid a high price for these advances. The disaster of climate change will almost certainly bring civilization crashing down over the next 50 years. And it will remain in ruins for the following three to four thousand years. Civilization was never a good thing. In the blink of an eye, in terms of humankind’s tenure on the Earth, it produced a calamity of suffering.

Someday, in a distant future, a new stone age may arise among the survivors of the homo sapiens species. We can hope they will be more gentle with the Earth as clans of hunter-gatherers.

More essays and stories about life in the North Country are published in my six collections of essays, available through Amazon.com at  Jerry Johnson Author Page