The Summer of Our Disconnect

Posted on September 9, 2019 by Jerry Johnson

Restoring the exposed log wall of our 135-year-old farm house was the most challenging home maintenance project we have ever attempted.

With the final stroke of the paintbrush the project was done. The exposed log wall of our 135-year-old farmhouse was restored, renovated, rejuvenated. A rugged rustic artwork that graphically depicts a long-past era of the farm’s history, this wall on the east side of the house now looks much as it did in the 19th century we believe.

The new siding on house was an easy project: we hired it done.

The log wall re-chinking was the most challenging and difficult home maintenance project of several that we undertook from June through August, the months I call “The Summer of Our Disconnect.”

Some of those projects were the routine labors of every summer in the North Country: cutting, splitting, hauling and stacking cords of firewood, cleaning the woodstove chimney, gardening, brush cutting and grass mowing. Others were forced upon us: driveway and culvert clean-up and reconstruction after two flash floods, and re-shingling the garage roof.

The garage, home to my Workshop and Clubhouse, re-roofed and re-sided.

There were a few major projects that we have discussed the past several years and finally acted upon: selectively logging 70 hardwood trees from our woodlands, arranging for the haying of our grasslands by an organic beef and dairy farmer, re-siding the house and garage, constructing a television antenna tower, taking down a set of dog kennel runs that will never be used again, replacing a half dozen double-pane windows that have become fogged.

Some updates of electrical wiring and installation of a ceiling fan awaiting completion, but that is not in my province. I do not mess with electricity or diamondback rattlesnakes.

The log wall restoration, on the other hand, became my obsession. The work began as a joint project as my beautiful blonde wife and I wire brushed a layer of wood stain and gritty patina from the oak logs, but it evolved into a manic-compulsive project almost entirely my own. I treated the logs with insecticide to eliminate wood borers, chipped out all the original and patchwork repair mud-and-sand and lime chinking from 135 years, removed some ugly chunks of wood and stone that had been used to fill the wider gaps, discovered and removed the rotting bark from a few logs, mixed many gallons of chinking mortar (3 parts lime, 3 parts sand/silica, 1 part Portland cement), and packed it into the gaps.

That was a chore! If I could have worked from both sides of the wall the task would have been much easier, but the interior of the wall was long ago covered with lath and plaster so I had to remove and replace all the chinking from the outside. This demanded a balance between savage pounding with hammer and chisel to remove the mud-and-sand pack from the outside half and some delicate chipping to remove it from the inside half without damaging the plastered wall of the kitchen.

There were days when I proposed we should walk away from the wall project and list the farm place for sale “as is.”

Packing in the new mortar was equally difficult. This is not a modern, milled face, evenly spaced log wall. No, in 1884 these logs were roughly shaped with ax and adze from huge oak tress felled nearby, then stacked and mortised and pegged in a way that told me the original settlers intended to live in this log house a few years until they were prosperous enough to build a frame house. After 135 years, that day has yet to arrive, even for us current residents. 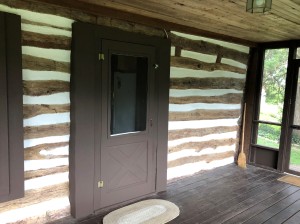 Framing and trimming the window and door in the log wall required a couple days’ painstaking work. Except that the cedar boards have replaced the rough cut oak planks, we think this is how this wall looked a century ago.

I read a dozen website articles and viewed three or four online videos to learn the techniques of chinking with mortar — which is technically called “daubing” I discovered; “chinking” refers to the wood blocks used to plug the wider gaps between logs. Most of the log wall restoration experts advised packing in the mortar with a trowel. Working from one side of the wall only, on rough logs with cracks and knots and splits, my packing tools included not only a trowel but also spatulas of three different sizes, a wooden spoon, a bent fork, a plastic knife, and often my rubbed-raw fingers. (Refer back to the previous “walk away and list the place for sale” comment.)

Wisely, I started the chinking-daubing work on the least visible part of the log wall. Do not look closely at those first attempts. But by the time the project was completed, I fancied myself a skilled practitioner of a rare reconstruction trade, although it is a trade that I will never, never, never practice again. At the end, my BBW applied the limewash to the face of the chinking-daubing, and she painted a sealant onto the exposed logs. Then I trimmed the door and window frames with cedar boards, each one painstakingly shaped to fit against the profile of the logs. Our finish work complemented the renovation, making the wall look as it must have a century ago.

Erecting a television antenna tower we built with 4-inch PVC was an exciting day on a steep roof.

The project took us nearly two months from first scrub of a wire brush and whack of a hammer to the final strokes of paint brushes. While we muddled through, loggers felled and hauled away trees, a contractor came with excavator and dozer to rebuild the quarter-mile long driveway and culvert, a roofing crew re-shingled the garage, a siding crew installed vinyl siding on the house and garage, we erected a 25-foot television antenna tower we built with PVC pipe, and the usual chores of summer demanded much of our time.

All of this to say we were disconnected from just about every other summer activity. Grandchildren came to visit for a week, but there was no opportunity for vacation or travel. Or writing and posting blog essays.

September has arrived, and we spend most mornings enjoying a leisurely breakfast on our east side deck, looking at the restored log wall and thinking, with no small degree of amazement, “Wow! We did that.”

Today’s return to the keyboard and blog site is evidence that I’m taking a break from house maintenance chores for a least a month. Right after I clean the chimney, that is.

More essays and stories about bird dogs, bird hunting, bird guns, and life in the North Country are published in my five collections of essays, available through Amazon.com at  Jerry Johnson Author Page

4 Responses to The Summer of Our Disconnect