Flood waters wash across the base of our driveway. This photo was taken after the worst of the flash flood had abated.

Our rain gauge showed 2.6 inches of precipitation overnight. Most of it fell in a two-hour period. The National Weather Service reported 50-plus miles-per-hour winds. The strongest  gusts came during that two-hour torrential thunderstorm.

When the worst of the rain abated, I took a camera to the base of our driveway to capture some photos of the flooding I knew would be horrendous. This was the second major flash flood of the summer. More are forecast.

The culvert pipe at the end of our driveway is blocked, filled with runoff muck and debris from the previous flash flood. A day before the latest storm I foolishly climbed down into the 15-foot-deep catch pool where the “dry run” of our south draw meets the driveway’s culvert embankment. The dry run has been small creek all summer. When flood waters fill the catch pool, it overflows across the embankment and the dead end road’s cul-de-sac.

To drain the catch pool I wanted to open the culvert’s corrugated steel pipe, but its mouth is somewhere beneath two feet of mud that clings to boots like wet concrete. Using a steel rod for a probe, I search for it 20 minutes and never found it. It appears to be under a jumble of rip-rap stones that rains washed down the face of the embankment. A half hour later, I had given up any hope of opening the pipe and was feeling fortunate to have gotten out of the catch pool’s quick-muck without suffering a coronary collapse.

That evening, the latest drenching rain brought on the worst flash flood of the summer — so far. When the worst of the storm subsided, I pulled a poncho over my head, grabbed my i-phone, and stumbled down the badly rutted driveway to capture some photos. The power and terror of a flash flood is impossible to comprehend unless you are standing at the edge of one.  Feeling as though I had been transported from the North Country to some tropical forest during the rainy season, I shakily took a couple dozen photos and retreated back to our house at the top of the hill. 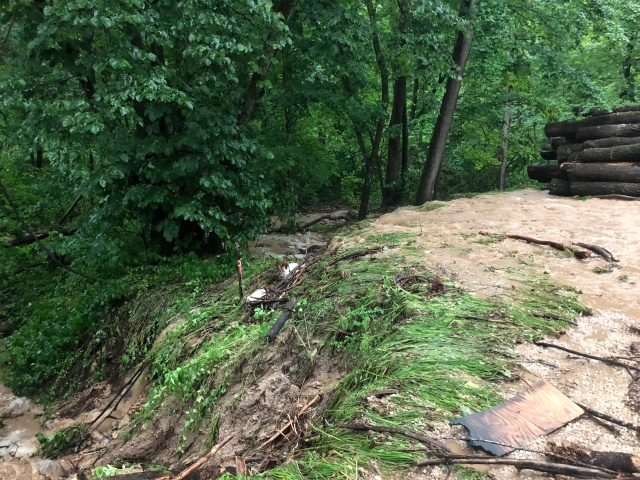 Flash flood ripped out the banking of the county road cul-de-sac at the base of our driveway. Along the edge of the road, loggers stacked trees taken from neighbor’s woods. Not sure when they will be able to haul those away. The road is covered with 2-4 inches of slimy muck.

Lightning strikes and rolling thunder were continuous all through the warm June night. Rain showers, some heavy, woke me several times.  Mid-morning I called the excavator contractor and left a message on his answering machine. Our entire driveway and culvert will be have to be repaired and reshaped. 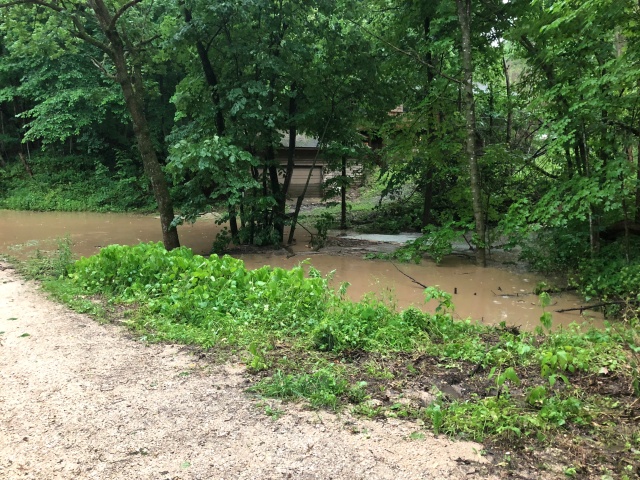 This is the catch pool where the “dry run” meets the culvert embankment at the base of our driveway. This water is more than 15 feet deep.

From January 1 through June 30 this year, official weather records report 23.7 inches of precipitation. Our rain gauge records tell me that more than 27 inches have fallen on our farm. Over the past 128 years (the time when official weather records have been kept), the average annual rainfall in our part of the North Country  is 35-36 inches. In the 35 years we have lived here, there has been nothing – nothing! – like the torrential rains and flash floods of this summer. The 54.4 inches of precipitation that fell during calendar year 2018 supersaturated the soil, and virtually all of the rain that falls this summer becomes runoff — flood water.

I fear this may be the new normal. Climate change is real, it is happening. A 50 percent increase in precipitation in the North Country appears to be part of that change. We cannot halt it, let alone reverse the weather trend. We will be forced to make major changes in our lives to deal with it. This will be difficult for a curmudgeon like me.