Sub-sonic .22 Long Rifle loads are, in theory, more accurate than super-sonic high velocity loads because of some aerodynamic “disruptions” that affect the flight of the faster bullet as it decreases from super-sonic to sub-sonic speed during the course of its flight. I do not pretend to understand this; my expertise in physics ends with the practical knowledge that water always runs downhill.

Not only the varmint shooters, who have good reason to want “flat shooting” rifles that propel tiny bullets at more than 4,000 foot-per-second muzzle velocities, but also the big game hunters who choose .300 magnum calibers over the more mundane .30-06 so they can boost the velocity of a 180-grain elk-slayer bullet in excess of 3,000 fps.

We old timers remember that the quest for ever-faster bullets is all the fault of Jack O’Connor, the rifleman’s writer who began singing the praises of higher velocity cartridges more than 75 years ago, especially his beloved Winchester .270 caliber bolt action rifles. For 20 years there was quite a war of words between the fast bullet boys who championed smaller caliber, higher velocity rounds and the big bullet boys who clung to the notion that larger bore rifles that fired more substantial chunks of lead at lower speeds were more lethal for big game.

The speed demons ultimately won. You won’t see anyone in the West, and very few hunters in the East, toting a .348 Winchester or a .35 Remington these days. Admittedly, the ancient .30-30 Winchester holds on as a woods rifle for whitetails, but that has more to do with the tradition and romance of the lever action rifle than ballistic superiority. You could argue, too, that the big bullet boys still have their advocates because I know of elk hunters who go afield with a .338 Winchester Magnum loaded with 225 grain bullets or a .375 H&H Magnum shooting 270 grain bullets.

But in general, speed is the ticket for rifle shooters and for a number of valid reasons. Foremost is the law of physics that proves the striking energy of a bullet increases significantly at higher velocities. A 160 grain bullet from my old 7x57mm Mauser rifle was traveling at about 2,160 feet-per-second when it reached the target at 200 yards and therefore delivered about 1,650 foot-pounds of energy. The same bullet fired from a 7mm Remington Magnum is traveling at about 2,500 fps at 200 yards and has about 2,230 foot-pounds of energy. That additional 580 foot-pounds would not be noticed by a whitetail or mule deer hit in a vital area, but it would make a heap of difference if your target was a large elk.

Also, faster bullet speed makes for a longer “maximum point blank range” and somewhat reduces that pesky problem of wind drift (see Riflery – the science and the art; and Riflery – the science and the art II). If you have chosen the right bullet weight and configuration for the game animal you are hunting, shooting that bullet with a cartridge-rifle combination that produces a higher muzzle velocity makes good sense – up to a point. Every action has an equal and opposite reaction, Mr. Newton explained long ago, and I do not enjoy feeling my teeth rattle when I pull the trigger of a .300 Weatherby Magnum. Recoil flinch will assure that you miss what you’re shooting at almost every time. Choose the cartridge and rifle you can shoot comfortably.

My latest adventure in muzzle velocity is at the other end of the speed chart. The mysterious, unexplainable shortage of .22 Long Rifle rimfire ammunition led to my recent purchase of a couple hundred rounds of CCI sub-sonic, hollow-point, 40 grain lead cartridges. I was about to pass them by, but my curiosity got the better of my Old Coot’s hidebound prejudice for CCI’s high velocity loads. And new ballistic experiments are always fun.

Sub-sonic .22 Long Rifle loads are, in theory, more accurate than super-sonic high velocity loads because of some aerodynamic “disruptions” that affect the flight of the faster bullet as it decreases from super-sonic to sub-sonic speed during the course of its flight. I do not pretend to understand this; my expertise in physics ends with the practical knowledge that water always runs downhill. But I was eager to put the scientific theory to test on my 25-yard shooting range.

Using a rifle rest sandbagged securely on my shooting bench, I fired a 10-shot group of the CCI sub-sonic rounds and a 10-shot group of super-sonic (CCI Mini-Mag high velocity), 40 grain, copper-coated rounds at paper targets. I fired all through my Savage Model B II bolt action rifle, which has a heavy barrel and a 3-9 power scope but is not truly a target grade rifle. The Chrony reported the sub-sonic rounds had a muzzle velocity averaging 1,055 fps, and the super-sonic loads 1,240 fps. The day was not the best for rimfire target shooting: a gusting 10-15 mile-per-hour wind was blowing left to right. I tried to fire shots when the wind was calm. I am also at the age when each 10-shot group is likely to have one shot go wide as a “Coot Flyer.” Each of these groups did. 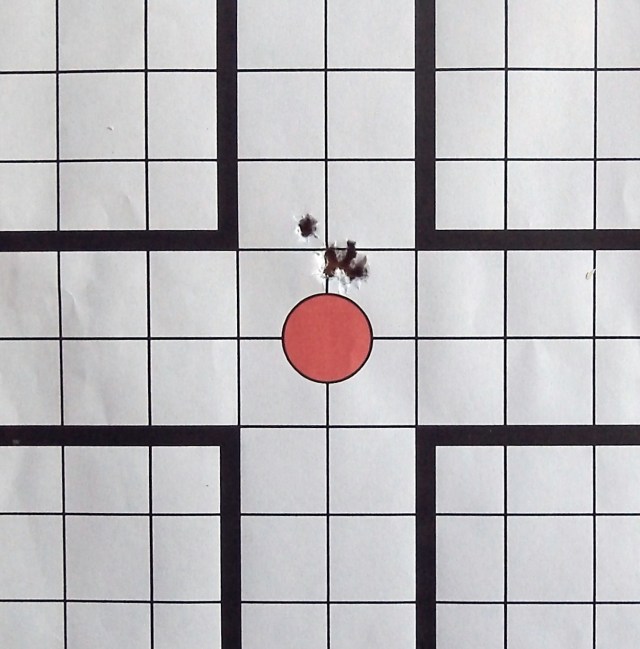 I am at the age when each group is likely to have one shot go wide as a “Coot Flyer.”

The results were not what I expected. The sub-sonic group measured one-half inch (not including the Coot Flyer), and the super-sonic group measured three-eighths inch (again, not including the Coot Flyer). The good news is that the sub-sonic rounds are perfectly suited for plinking silhouette targets with my grandchildren, and that’s really why I bought them anyway. They are noticeably quieter.

The next time I visit the gun shop there will probably be cases of high velocity .22 Long Rifle ammunition stacked to the ceiling, but if my choice is again limited to sub-sonic loads I will not hesitate to buy a couple more boxes. For one thing, I want to use them in the woods this fall on a squirrel hunt, just to flaunt the virtues of slow bullets in the face of hunters who insist that these .17 HMR rounds that zip along at 2,300-plus fps are the new standard for small game shooting.

The fast-bullet boys know it’s useless to argue with me; I’m the only rifle hunter in the North Country who still owns a .35 Remington.

More stories about wildlife, outdoor ventures, hunting, fishing, and life in the North Country are published in my three collections of essays, Crazy Old Coot, Old Coots Never Forget, and Coot Stews , and my novel, Hunting Birds. All are available in Kindle and paperback editions at Amazon.com, and in paperback edition at the North Country bookstore Dragonfly Books in Decorah, Iowa, and through IndieBound independent bookstores.