Riflery – the science and the art II 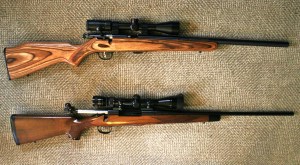 The same day you buy your hunting rifle, buy a .22 rimfire rifle that approximates the hunting rifle’s configuration as closely as possible.

Brown was not a marvelously good shot…but he could handle his weapon in good workmanlike fashion; and the rifle asks no more.”
— from the novel Brown on Resolution, by C.S. Forester 1899-1966

If you want to shoot your hunting rifle exceptionally well, do not shoot it too often or too much. Seriously. Frequent practice sessions with your centerfire rifle will probably not improve your shooting ability and may worsen it.

Let me explain why.

Proceeding from the premise in Part I of this essay on riflery, that the discipline of rifle shooting is a blend of science and art, and that the science is best learned at the shooting bench, we can now venture that the art is best learned through simulated field shooting at the rifle range. But not necessary with a deer rifle.

During our “science” shooting sessions from the bench we used some simple and practical applications of ballistics to attain absolute confidence in our rifle. We learned which ammunition it shoots most accurately, and we sighted it in for its maximum point blank range.

So our rifle is now prepared to shoot to the limit of its capability on our next hunt. It will function perfectly. But we are not yet prepared to perform to the limit of our capability. To reach our highest potential as shooters, we must learn and practice proper and efficient skills in handling and operating the rifle.

As with all sports, developing and maintaining fundamental skills and techniques requires study, instruction, training, and much repetition. To quote an overused adage, “Practice does not make perfect. Perfect practice makes perfect.”

Shooting from the bench with the rifle supported in a machine rest or on sandbags is lousy practice for field shooting. Everything about it teaches the worst possible lessons regarding mounting the rifle, acquiring the target, locking on and maintaining point of aim, trigger control, follow-through, and operating the rifle’s action for follow-up shots.

To shoot a rifle well we must perform each of those steps correctly, smoothly, seamlessly, and automatically. Just as in golf, tennis, bowling or any other sport, we must develop correct techniques in riflery and then practice, practice, practice those techniques (perfectly) so that performing them becomes “muscle memory” that requires no conscious thought.

Shooting from the bench instills all the wrong muscle memories. Field shooting requires that the rifleman use his body as a solid shooting base and that he make the rifle become an integral part of him, functioning not as a separate tool he is mechanically operating but as an appendage that is an extension of his body. His head, neck, shoulder, arms, torso – his entire body is welded to the rifle so that it moves where he moves, points where he points, sights what he sees, and delivers the shot as if it were a flash of thought, not the physical twitch of his trigger finger.

He must learn to do this from each of the four primary shooting positions we commonly assume in the hunting field: prone, sitting, kneeling, and standing. Each requires a distinctly different technique, and the rifleman should master all of them.

Shooting from these four positions at the rifle range, with wise and positive instruction from an accomplished rifle shooter, is the best way to learn the many “hows” of the sport:

Describing even one of these “hows” would require more words than this entire essay. There are many good books and articles devoted to this subject, and rifle shooters would do well to read as many as possible. I regard gun writers Jim Carmichael and Craig Boddington as the best at providing written instruction on riflery, but there are dozens of other good writers on the subject.

More importantly, I advise shooters, even shooters with years of experience, to find a competent shooting coach who can critique their shooting style and offer suggestions for improvement. Do this and you will learn much that will make you a better shooter and hunter.

An example. Years ago a shooting coach watched me working the bolt action of my deer rifle for a follow-up shot and offered this bit of invaluable advice:

Once you have acquired the target, never take the rifle from your shoulder and always keep the target in your scope. For a follow-up shot, keep your left hand in its natural position on the forearm of the rifle to press the butt of the stock firmly into your shoulder, slap the bolt handle up with the open palm of your right hand (you do not grip the bolt knob with your fingers), yank the bolt backward with your little finger, then slap the bolt forward and down with the open palm of your right hand. Using this technique, you maintain the target in the scope throughout the reloading sequence, and the rifle is ready for a follow-up shot in less than two seconds.

This is only one of dozens of techniques that can be learned from riflery writers and coaches. Keep in mind that you must practice these techniques hundreds of times to master them. For the example cited, you can sit on the floor of your den and practice this reloading sequence a thousand times until it becomes automatic. Buy a half dozen of the snap-cap dummy rounds of ammunition so that the fire-extract-eject-reload sequence is more realistic.

It would be even better if you took your personal list of “Riflery Techniques I Must Learn” to the shooting range and practiced them while firing hundreds of rounds of live ammunition in your favorite hunting rifle, right? Well, no. And this is where we come back to my outrageous pronouncement that more frequent practice sessions with your centerfire rifle will probably not improve your shooting ability and may worsen it.

You will not notice this recoil in the field where you may fire only one or two shots during the entire deer season, and those shots are fired in the excitement of the moment with your adrenaline levels surging. But at the shooting range your body will definitely object to the abuse, and after a dozen shots you will begin, subconsciously, to tighten up and flinch in anticipation of the rifle’s recoil.

Recoil flinch will become a learned behavior that will accompany you into the hunting field, and it will destroy your ability to shoot efficiently and accurately. Do everything possible to avoid developing recoil flinch.

No doubt there will be a large, hairy, male, extroverted, opinionated person at the rifle range who will tell you that recoil never bothers him, even when he is shooting his six-and one-half pound rifle in .416 Remington magnum caliber. If you get the chance, slip a dummy round into his rifle’s chamber and watch the funny little jump-and-jerk dance he does when he trips the trigger. Recoil (and her ugly sister muzzle blast) affects every shooter, some more than others, but all to some degree.

How to avoid developing recoil flinch? The same day you buy your hunting rifle, buy a .22 rimfire rifle that approximates the hunting rifle’s configuration as closely as possible.

The two rifles are both bolt-actions, weigh about the same, and handle about the same. The balance is a little different, and the length of throw of their respective bolts is obviously different, but for field riflery practice, they are close enough.

The .22 rifle does not induce recoil flinch. And each round I fire costs less than 10 cents, even in these mad days of the .22 long rifle ammunition hoarders.

The light weight .30-06 rifle would surely induce recoil flinch if I were to shoot it much, and each round I fired would cost about 35-40 cents, even considering that I custom load all my own ammunition and I have stocked a lifetime supply of .30-06 brass. If I were shooting factory ammo, the cost would be closer to one dollar per round.

There, in two parts, is the curmudgeon’s primer on how to learn the science and art of rifle shooting. Follow it, and you can become as good a rifleman as me. Actually, you should become a better rifle shooter than me. Much better.

More stories about hunting adventures and hunting rifles are published in my collection of essays, Crazy Old Coot, and my novel, Hunting Birds. Both are available in Kindle and paperback editions at Amazon.com.