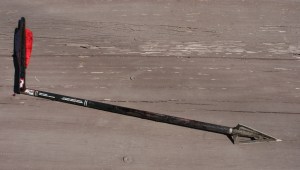 Hunting success should not be gratuitous. If you do not earn it, you should take no pride in it.

Seeing the broken-shafted arrow at the side of the game trail sparked a memory: for the Plains Indians the act of breaking an arrow shaft signified that a man had broken faith with the tribe. Since that memory is undoubtedly from a western movie seen during my youth, it likely originated in the studio nation of Hollywood rather than the Sioux Nation of the Dakotas, but on this first day of bow season it represented my troubled mood as I followed a series of blood splashes through the woods. I had broken faith with one of my own hunting tenants by killing a deer I had not earned.

Although I cannot exactly say how or why or when the “earn it” work ethic was implanted in the children of my generation, that credo seems to have remained strong in most of us into our senior years. We were taught that we had to plan, prepare, train and work hard to attain our goals. Anything less would be a sort of cheating: relying on luck or privilege or (worse) the hard work of someone else to achieve success.

Somehow these values carried over into my hunting avocation. Subconsciously I feel that a good day in the field cannot be a gift, it has to be earned. One should walk at least a mile or two for every grouse or pheasant in the vest. Taking a deer should involve no less than a week of scouting and setting up tree stands, and then waiting for hours on several evenings before the right deer comes within bow range. Hunting success should not be gratuitous. If you do not earn it, you should take no pride in it.

So I was feeling a bit of guilt on this evening of opening day because I had randomly selected a tree stand for the late afternoon, intending to scout deer movements and patterns, not actually hunt. It was complete coincidence, not planning, that a buck came browsing up the trail, hopped the fence, and stood broadside nine yards from my tree while he gazed across the adjacent hay field.

I had not earned this buck. My mind played a frantic game of tennis, slapping the ball of indecision back and forth across the net of misgivings until practicality prevailed and I slowly stood, put the sight pin behind the deer’s shoulder, and released the arrow. The buck stumbled, righted himself, and scrambled back down the trail 20 or 30 yards before collapsing.

I sat for a 15-minute wait before going after him; one experience of putting a not-quite-dead deer to flight through a half mile of thick brambles has taught me patience in this stage of the hunt. The delay gave me time to rationalize my decision to shoot: deer populations are down in our woods, I do not have many days this October when I will be able to bow hunt, the freezer is down to the last few pounds of venison from last year’s two deer. Not to mention the horrid little demon on my shoulder that whispered, “If you pass up this shot, you may not get another.”

Blood trailing the buck, I came upon the front half of the broken-shafted arrow that had pulled out when he first fell. The other half was found in his body cavity when I field dressed him. It was a sign: I had broken faith with my tradition of bow hunting, and there will surely be consequences.

My feelings could best be described as “empty.” Bow hunting in the North Country is the long season. At least it has always been that way for me. Until this October.

This season was 12 hours, start to finish. Broken arrow.

I will miss most of the enjoyment and reward over the next five or six weeks. I suppose I could go out mornings and evenings, sit in a tree stand, and take photos of the deer moving through on their daily routes from bedding place to feeding grounds to loafing areas. But for reasons that elude me, there has to be the promise of blood in the blood sports to motivate us hunters to get into harness and go through the paces.

I love being outdoors during October in our county with its topographical mix of sloping farm land broken by limestone bluffs and deep draws, most of which are watercourses for dry runs or spring-fed streams. Too rugged and steep for grazing cattle, much of the rough ground is woodland – usually neglected woodland – with a mix of deciduous hardwoods and softwoods with scattered cedar, spruce and pine.

Because there is so much elm, with short life and limited growth, there are few woods that fully canopy, shade out the undergrowth, and become open and park-like underneath. This can be tough ground to hunt. Earning a deer includes the work of scouting for the year’s most-used trails in these woodlands that typically have an understory layer of small tress, a lower layer of shrubs (most often invasive species such as buckthorn and serviceberry, unfortunately), and a ground cover of dozens of vines and stalks that include wild raspberry, gooseberry, wild grape, nettle, beggar tick, and burdock. There are probably a hundred types of beautiful and fascinating wildflowers, too, but like most hunters with the aesthetic appreciation of a Neanderthal I can identify only the stuff that scratches, prickles, stings, tangles or otherwise impedes my woodland walks.

Until the last few years, there were few autumn walks when I did not spook a dozen or more deer from their beds each time out. When our township had hundreds of acres of grasslands created by the Conservation Reserve Program from about 1990-2010, this was premier habitat for whitetails. Deer populations grew until they became a nuisance. The number of trophy-size bucks was legend. The state’s Department of Natural Resources increased bag limits, permits, and length of seasons in an attempt to reduce numbers.

Those days are over with the disappearance of CRP fields. Deer populations are more dense inside city limits than in the rural areas. The number of deer harvested by hunters each year has not declined drastically, but as one fellow bow hunter notes, “You see a helluva lot more fork-horns and a helluva lot less eight-pointers.”

Since my deer hunting is intended to put venison in the freezer, not another set of antlers on the wall, the decline has not affected me as much as it has the hunters of monster bucks. But even the does of 10 years ago, those four or five-year-olds with a hanging weight of 120 pounds, are rare. That does not mean I have lost my passion for the sport. Although bird hunting is my first love (dogs have a way of making a day afield a joy), bow hunting is more spiritually fulfilling; you do not only walk in the wild world, you become part of it.

This year I achieved my practical objective in a single day’s hunt: half of the winter’s supply of venison will soon be in the freezer. But I have lost the greater rewards of the season.

Fortunately, there will soon be a second chance. Muzzle-loader season rolls around in late October. Maybe I’ll have to hunt hard and steady all nine days of that season before I shoot our second deer.

Earn it, this time.