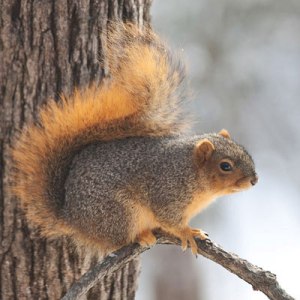 The world does not owe me a squirrel woods on my doorstep, especially since I have given not one moment’s thought to squirrels while designing and implementing all the wildlife habitat projects on our place, but I rue the loss of the little bird feeder bandits.

My father loved squirrel hunting. The sport was less appealing to me in my childhood, probably because of the way it was practiced. We would wake in the pre-dawn hours of a cold autumn morning, gulp down a breakfast of lumpy oatmeal, drive an hour to a woodlot on a southern Ohio farm, stumble through the dark to a likely grove of trees, and then sit for hours awaiting the appearance of a few gray squirrels and the much sought-after fox squirrels, but most often we saw the chipmunk-size red squirrels that we never shot.

Compared to a pheasant hunt’s constant movement and anticipation of explosive action, this squirrel hunting business was boring stuff for a 10-year-old. Also, the quarry looked like bushy-tailed rats and were a misery to skin and clean. It was many years later that I acquired a greater appreciation for squirrels and the hunting of them.

For one thing, I learned that the hunt did not have to be punishment. Strolling through the woods for a few hours on a warm autumn afternoon was much more pleasant than the sourly remembered morning hunts of my youth. And a 15 or 20-minute stake-out under a walnut tree was more than enough sit-down time; either the squirrels are there or they are not, and waiting long hours with the patience of Buddha will not make them magically appear.

Most of all, I learned to enjoy the aspects of squirrel hunting that were not hunting at all. Early autumn days in the woods have a beauty and a soul-soothing peacefulness that is beyond describing. Sitting still and silent you will often see wild creatures come wandering by – deer, raccoons, skunks, fox, occasionally a coyote – and the woodland is full of a dozen species of songbirds. With my back propped against a blown-down tree trunk, on the verge of napping, I have been jolted awake once by a huge tom turkey and once by a great horned owl, both less than a yard away. They inspired me to perform athletic feats I thought were beyond my capabilities, a seated high-jump of more than four feet for example.

The squirrels themselves, both grays and fox squirrels in our part of the North Country, put on an energetic and madcap show that is part Marx Brothers movie and part Ringling Brothers Circus: racing, chasing, leaping, playing hide-and-seek, all accompanied by the shrill and scolding chatter of a frantic Italian mother with eight unruly children. Once in a while I would shoot one or two with a .22 rifle. Two years I tried hunting them with bow and arrow; I bagged one squirrel and lost three arrows.

Our first four or five years on the farm I spent a lot of afternoons squirrel hunting, usually in a two-acre patch of oak trees on my neighbor’s place that was premier squirrel habitat. Then suddenly I stopped. There were a lot of more important demands on my time – children, job, home improvement projects, bow hunting for deer – but the foremost reason was the disappearance of the squirrel woods. My neighbor had his woodlands logged, and the oak trees were gone.

This did not strike me as a great tragedy at the time; trees are a renewable resource, and the woods would come back over the course of a couple decades. Unfortunately, his reforestation plan was to open the recovering hillside to cattle grazing, so the oak trees were supplanted by white elm, box elder, buck thorn, and prickly ash, none of which make for a good squirrel woods.

The radical change in the types of trees in his woods and the gradual aging of the oak, walnut, hickory, and elm trees in my own adjacent woods over the past 25 years has not benefitted squirrel populations. I think some other factors have also caused the decline in squirrel numbers, but I am not observant enough or clever enough to figure it out. Predation, GMO corn, disease, global warming – I would like to find a culprit but maybe it is a dozen small reasons.

Whatever the cause, I was dismayed to discover yesterday on my first squirrel hunt in more than 25 years that they are gone, gray and fox squirrels both, without a trace. I spent the last hour of the afternoon walking the woods in search of their leafy summer nests high in the branches. There were none. I wanted to walk the woods on the west side of our place, too, to check the situation there, but a steady rain began to fall and I was beset by this gloomy feeling I was trapped in a Victorian novel about the end of age of landed gentry in County Warwick in 19th century England. Thank goodness I did not encounter a flock of Shropshire sheep on the walk home.

The world does not owe me a squirrel woods on my doorstep, especially since I have given not one moment’s thought to squirrels while designing and implementing all the wildlife habitat projects on our place, but I rue the loss of the little bird feeder bandits. There are scads of them in the parks in town, so it’s not as though the survival of the species is threatened. I know there are both fox squirrels and gray squirrels aplenty in the North Country; it’s just that they are not here on our farm.

But the wild changes from year-to-year, and as new growth trees emerge on the bluff on the west side of the farm where we have done a forest improvement project, I’m hopeful that piece of woodland will become a squirrel woods. I dumped a five-gallon bucket full of walnuts there today, still encased in their hard green shells, more as a symbolic act of my hope for renewal than a meaningful feeding of whatever squirrels inhabit the young woods.

I’ll check back next fall to see if the magic worked.