No! There’s the land. (Have you seen it?)
It’s the cussedest land that I know,
From the big, dizzy mountains that screen it
To the deep, deathlike valleys below.
Some say God was tired when He made it;
Some say it’s a fine land to shun;
Maybe; but there’s some as would trade it
For no land on earth—and I’m one.
– Robert W. Service (1874-1958)

Raised on the romantic image of the Canadian Rockies – Robert Service poems about manly wilderness adventures, and Jack O’Connor stories about big game hunting in remote alpine meadows and across craggy peaks – I longed for the day when I would venture into the forested mountains of British Columbia and Alberta, pack upon my shoulders and rugged boots upon my feet, eyes taking in the wonder of some of the most savagely beautiful lands on Earth.

And that is what my beautiful blond wife and I did for nine days in June to celebrate our 45th wedding anniversary. Travel weary and still recovering from sensory overload, we returned to our North Country farm with the visions of a thousand new sights and experiences tumbling through our brains, memories that will have to be sorted out and stored away over the next several weeks while we try to understand what we saw and learned as we traveled by airplane, train, automobile, and boot leather across hundreds of miles (or should I say hundreds of kilometers) of mountainous country.

It was not the trip we would have planned forty-five years ago when we thought nothing of hoisting aluminum-framed backpacks stuffed with thirty pounds of gear and hiking a dozen miles to a back country campsite, grizzly bears be damned. No, there is a vast difference between the life-list we compile in a personal journal in the days of our youth and the bucket-list we scribble on the inside cover of a visitor’s guidebook in our senior years. 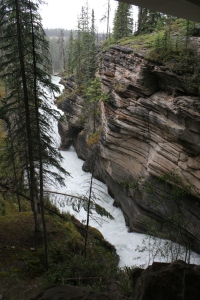 So it was with our Canadian Rockies adventure. Easy day hikes to scenic overlooks replaced challenging treks across mountain ridges, comfortable rooms in rustic lodges were more suitable accommodations than a pup tent pitched in the shadow of a glacier, and bangers and mash at the local Irish pub seemed just as tasty as noodles and jerky boiled in a metal pan over the sputtering flame of a Primus stove at twilight.

My much-traveled hat and the binoculars in my belt pouch were the same, but the strap over my shoulder toted a battered Canon 20D camera rather than that battered Winchester Model 70 rifle I once envisioned myself lugging through these Rocky Mountains. No matter; packing out a moose, caribou or elk is no longer a labor I would enjoy.

Our trip itinerary was simple: airline flight to Vancouver; Rocky Mountaineer sight-seeing train trip to Kamloops and then Jasper; day hikes in Jasper National Park; drive a rental car south through the ice fields of Jasper and Banff National Parks with several four or five-mile hikes along the way; two days in Banff; and a day in Calgary. Followed by a weary flight home through Chicago (which is just beneath Pyongyang on my favorite cities list).

Vancouver was a good and relaxing start. We spent two days walking the city center and coast, learning a few facts and legends about its history and culture, and observing that Canadians, for the most part, are friendlier than folks in a similar size U.S. city. Vancouver was hosting Women’s World Cup Soccer matches in June; maybe that was part of the festive and open atmosphere.

The locally brewed beers were excellent, but I have to say that watching several dozen ice hockey game highlights one night at a sports bar did not excite me. Each ends with the puck going into the net and several burley men on skates hugging one another. Do not be alarmed: nothing else in Canada is that repetitively dull.

The next morning a bagpiper in full Scots highlander regalia played as we boarded the Rocky Mountaineer train. That clinched the “amazing factor” of the trip for me. I love bagpipe tunes.

The two days aboard the Rocky Mountaineer were fascinating. We rolled along at a leisurely pace, observing and taking photos of the stunning scenery of western Canada’s historic rail routes that follow rivers, cross mountain passes, span gorges, and blast through cuts and tunnels that were the engineering marvels of the late 18th and early 19th centuries. Meals, snacks, mid-afternoon glasses of wine – followed by warm hand towels – were all part of the service provided by the three members of the Rocky Mountaineer staff on our observation car. We enjoyed the pampering.

An even more valuable service, for me, was the staff leader’s frequent explanations of the historic and geographic significance of certain sections of the rail line. We also enjoyed his comments about the flora and fauna of the Canadian Rockies and his tales about the early British explorers who, I freely admit, must have been considerably tougher and way crazier than I.

Kamloops was a good town for an overnight stay, but do not make it a vacation destination. Jasper, on the other hand, was wonderful; we could have spent a week there and still not hiked all the trails and seen all the sites that we wanted to explore. Banff also has a dozen historic and cultural sites, but it is a crowded madhouse of tourists.

Driving along the Icefields Parkway, we stayed one night at the Chateau Lake Louise, a luxury hotel built at the turn of the century by Canadian railroad magnates who predicted, correctly, that wealthy elites from back East would pay big money to see and experience the grandeur of the Rocky Mountains. A magnificent building on the edge of an even more magnificent lake surrounded by mountain peaks, the chateau was a European-style holiday spa for scions of the 19th century Robber Barons who manipulated government, law and the economy to enrich themselves and impoverish the working class peoples of America.

I am consternated that modern day visitors to these palaces project themselves into those sepia-tone photographs of the leisured gentry enjoying the hot baths in the pool and the catered lunches on guided mountain excursions. Perhaps too cynically realistic, I know my roots are among the poor, not the rich, and if my forebears were here they would have been cleaning horse manure from stables, not riding in horse-drawn gilded carriages. Needless to say, I felt uncomfortable in the role of leisured guest in an era when a new breed of Robber Barons are recreating that harsh age of the privileged few and the destitute many.

My funk was cured by a day’s drive though the rolling hills and plains of southern Alberta’s cattle country. People work hard for a living here, but it is a good living in a beautiful country. Calgary, where we spent our final day of the trip, seems out of place, as though a small version of Dallas had been dropped incongruously onto the Canadian plains. But then, I am not good with cities of any size.

The flight home was simply boredom, although I always enjoy watching the uncaged animals in the zoo of Chicago O’Hare Airport. We arrived at the farm at 3 a.m. and slept nine hours before venturing out of the house to evaluate the damage done by the high winds and four inches of rain that hit the area during our vacation.

The Canadian Rockies trip was one of the greatest experiences of our lives. But it was good to be back home in the North Country.