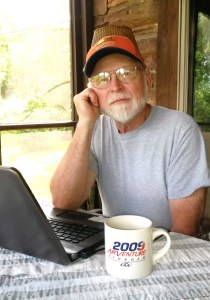 Today, Wednesday, June 17, 2015, marks the 100th essay I have posted on the Dispatches from a Northern Town blog site. Begun in December 2013, the blog was a pilot project to preserve the sanity of a retired journalist. It was not a wise choice, for emotional and mental health, to walk away from the keyboard cold turkey after writing every day for almost 40 years, 14 as a newspaper reporter and editor and 25 as a college public relations officer.

After a few months of insufferable behavior, moodiness, and grousing, I was encouraged by Sarah Carnes, a former communications and marketing intern in my office, to create a blog and start posting essays. Sarah is now COO of a hugely successful online marketing firm. She knows the blogging game. I did not.

“What would I write about?” I asked.

“Whatever you want,” she said.

How odd. Over the course of 40 years, the flow of news in the community or the communication goals of the college had defined what I would write – or photograph, or video. Now I was supposed to make my own choices on what to write?

During my newspaper years I had produced many editorials, opinion pieces, and sports columns, at least a thousand. Blogging, I ventured to guess, would be something akin to that type of writing. And it would be good, in a new phase of life, to try some new things, I reasoned.

Creative writing, fiction and non-fiction, was not entirely a new experience for me. In 2009-10, I wrote a murder mystery novel, Hunting Birds – The Lives and Legends of the Pine County Rod, Gun, Dog and Social Club, and after months of frustrated pitches of the manuscript to literary agents, I self-published it in 2011 with the help of online publisher CreateSpace. The book was made available in paperback and Kindle editions on Amazon.com.

But with the publication of Hunting Birds I was abandoned by those two fickle Greek Muses: Thalia, who inspires the writing of comedy, and Melpomene, who inspires the writing of tragedy. Calliope, the mother superior of the Muses, also dumped me. Apparently, Hunting Birds was a bit too rough and red-necked and bawdy for them. Effete little bitches.

Over the past 18 months I have discovered that the essay and the short story may be more my forté. Using the Dispatches from a Northern Town blog as my base, I have published two more books, collections of essays and short stories, titled Crazy Old Coot and Old Coots Never Forget. In retrospect, I see that Hunting Birds is really a collection of short stories too, a series of character sketches hung on the thin plot line of a small town murder story.

(A fourth book, Scrawny Dog, Hungry Cat, and Fat Rat – A Tragedy for Children, published in 2014, has a story all its own, a tale of friendship rather than penmanship.)

So I have become a creative writer, and though agents, publishers and movie producers are not knocking on my door and handing me generous royalty checks or advances on future novels, I am enjoying the craft and am mildly surprised that it is going well. There have not been any huge triumphs, but neither have there been any dismal failures. And at age 65, that’s territory where I’m comfortable.

One hundred essays is a road mark that suggests a look back at the long trek, which fittingly began with a 50-word posting titled A journey of a thousand miles…   Sorting through the files of manuscripts revealed some interesting (to me) facts about this game in which I am permitted to write about “whatever I want.”

Where the Dispatches from a Northern Town blog is headed from this road mark I do not know. Like many writers, I feel the cold fear of my creativity’s imminent death each time I complete an essay, a short story, or a book chapter. We are convinced the Muses truly will abandon us, and that will be the last thing we ever write. Then, miraculously, a story begins to grow in a corner of our mind, and we are pulled back from the brink of the grave.

3 Responses to One hundred essays