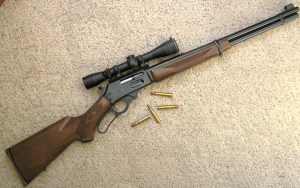 Although I would like to take my old-time**lever-action rifle on another deer hunt, it is not the best choice for long-range shooting on the open plains along the eastern edge of the Nebraska Sandhills.

We are all suckers for the promise of something that looks greater but turns out to be lesser. The push-up bra, for example.

A beautiful Marlin Model 336 lever-action rifle in .35 Remington caliber resides in the back row of my gun safe, lonely and asking to come out and hunt with me. I bought this rifle about ten years ago specifically for a Minnesota deer hunt, and I have used it to take one deer, a respectable but not bragging size six-point whitetail buck.

Since then the rifle has been woefully neglected, and every time I open the safe and hear its call I feel a sense of guilt. Why did I buy a rifle that I don’t need? Well, I’m not going to think too much about that; there are three or four other guns in there that I don’t “need,” but I’m not giving any of them up since they each embody the memory of at least one great hunt with great friends.

However, with another deer hunt planned in a “rifle state,” Nebraska, I pledged that I would pack along this lever gun in November so that I could enjoy a few more days afield with it in hand, and maybe even take another deer. Trouble is, a rifle in .35 Remington caliber is not the best choice for a whitetail hunt in the wide open plains on the eastern edge of the Nebraska Sandhills.

There is the possibility that my only shot at a deer could be taken at a range of 150 or even 200 yards, and this Marlin is a woods rifle, an excellent gun for deer at ranges of about 125 yards or less, but not a plains rifle that I would be confident to use for longer shots.

That is what is leading me down the slippery path toward another experiment with SuperAmmo. Every few years some ammunition manufacturer develops a new line of rifle cartridges that guarantees to transform your Clark Kent rifle into Superman. Personally, I have had mostly bad experiences with SuperAmmo. Do you remember Remington’s Accelerator line of rifle ammo? You do? Okay, enough said.

But shamefully, I am being lured once again by the sirens who sing a sweet and seductive song of ballistic desire and promise. I am on the brink of buying a box of the Hornady* company’s LEVERevolution cartridges in the vain hope that this SuperAmmo will convert my .35 Remington Marlin lever-action rifle into the .358 Winchester.

I learned a few years ago this LEVERevolution ammo was on the market, but until now I had no interest in buying any. Hornady produces this ammo for use in rifles chambered in old-time** calibers: 30-30 Winchester and .35 Remington. The goal was to improve the ballistic performance of these calibers by loading the cartridges with Hornady’s FTX bullet, which has an “elastomer Flex-Tip” point.

This is a spire-point bullet, but because it has a soft tip it can be loaded into a rifle with tubular magazine. Unlike a hard-tipped bullet, the Flex-Tip will not punch/ignite the primer in the round ahead of it when recoil slams the “stack” of cartridges backward in the magazine. All other cartridges produced for tubular magazine rifles have round-point or flat-point bullets; those blunt-nosed bullets cannot punch/ignite the primer of the round in front.

This is important, because having five or six rounds of centerfire rifle ammunition go off simultaneously in a tubular magazine, essentially in the palm of your hand, is generally considered a bad thing.

But in addition to bullet shape, the Hornady people have obviously put something else into play here, because the LEVERevolution ammo increases muzzle velocity by about 200 feet per second (in the short 20-inch barrel of my Marlin 336 that increase is more likely to be about 100 feet per second.)

As far as muzzle velocity is concerned, the rifle does not care what shape of bullet it is pushing down the barrel. If I load .35 Remington brass with 41 grains of Winchester 748 powder and a 200-grain bullet, muzzle velocity will be about 2,050 fps with round-nose, flat-nose, spire-point, or any other bullet.

So, to boost muzzle velocity to 2,200 feet per second Hornady is beefing up the propellant, either by increasing the amount of powder they are putting into the brass or, more likely, using a new powder blend. As a garage shop hand loader, this would be a dicey thing for me to do with cartridges for a lever-action rifle because reloading data cautions that chamber pressures should be no higher than 35,000 cup (copper units of pressure). More powerful loads for my lever rifle will not rupture the chamber or break the bolt locks; Marlin metallurgy and the design of the 336 can easily handle higher pressures. But .35 Remington cartridge brass, like .30-30 and most other old-time lever-action rounds, is relatively thin compared to case wall thickness of .308 Winchester or other modern** brass.

That’s an issue with hotter loads. When a rifle is fired, the brass expands like a balloon being inflated, which is good because that is what seals the cartridge in the chamber and prevents powder blast from blowing back into your face. As the bullet goes down the barrel and chamber pressure drops, the brass “deflates” back to its original size, or close to it; all this happens in about 1/100 of a second.

Among other benefits, this return to original size (actually, slightly inflated size) allows easy extraction of the spent brass from the chamber. The brass would be lodged in the chamber if it retained its “inflated” size. A .35 Remington cartridge that produces more than 35,000 cup will expand somewhat more, retract somewhat less, and can jam in the chamber. This is especially a problem with lever-action guns because they do not have as much extraction force as a bolt-action rifle.

I think Hornady must be boosting chamber pressures to increase muzzle velocity by 10 percent or more. This is not unsafe, but Old Coot curmudgeon that I am, I question whether this is wise. Each rifle caliber/cartridge performs best within a certain range of pressures, and going outside that range has the potential of poor ballistic performance and rifle malfunction.

Since the .35 Remington rifle/cartridge has been around since 1906, shooters figured out its best chamber pressure performance range a long time ago through trial and error, as well as laboratory experimentation. Hornady’s going outside that accepted pressure chamber range may or may not result in a good load. The company’s own website posts a caution:

LEVERevolution’s revolutionary new bullet design may require a newer magazine follower to provide best possible functioning of the last round out of the magazine. These magazine followers may be purchased from the manufacturer of your firearm. For optimum performance we do not recommend storing LEVERevolution ammunition in tubular magazines for extended periods, as this can result in tip deformation.

…which tells me that customers have had problems with rifle function and bullet performance. In a 20-inch barrel, I suspect muzzle blast would be bad, and muzzle jump even worse. And recoil. I hate recoil.

SuperAmmo is nothing new. I remember some 20 years ago that “light magnum” ammunition for .30-06 and other standard calibers was the rage. The claim was that it would make your .30-06 perform like a .300 Winchester magnum. Well, sorta. The light magnum ammo has had some issues: under-performance in short barrels, excessive muzzle blast, significantly increased recoil in lighter rifles, and most of all cost. It did not take the rifle shooting world by storm.

Buying SuperAmmo to “upgrade” your rifle’s performance has more to do with marketing than good ballistics. Again, each rifle caliber has its optimum range of interior ballistics characteristics and it is wise to use ammunition that performs within that optimum. My advice:

Unfortunately we are all suckers for the promise of something that looks greater but turns out to be lesser. Sort of like the push-up bra.

And that is why I am going to experiment with some LEVERevolution ammunition for my rifle before trusting it on a deer hunt.

Maybe. First I have to get past the shock that the stuff lists for $38.44 per box of 20 rounds. I not just a grumpy Old Coot, I’m also a tightwad Old Coot.

* This essay is not intended to be overly critical of the Hornady company. Visit my clubhouse and you will find it stocked with Hornady ammunition, components, reloading equipment and tools, and reloading manuals. And Hornady’s .22 WMR cartridges with 30 grain bullets significantly improved the performance of my bolt-action varmint rifle, so there is some valid SuperAmmo out there.

More stories about hunting, rifles, and shotguns are published in my collection of essays, Crazy Old Coot, and my novel, Hunting Birds. Both are available in Kindle and paperback editions at Amazon.com.