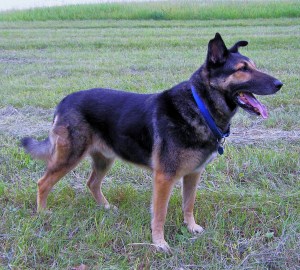 “Boy,” he said, “I will tell you a very wise thing. If a man is really intelligent, there’s practically nothing a good dog can’t teach him.”

– Robert Ruark (1915-65), novelist and outdoor writer, from his essay Old Dogs and Old Men Smell Bad, from the book The Old Man and the Boy

If Gus says “Down!” your belly better hit the ground in less than two seconds or you are going to be knocked rolling.

Gus is a seventy-five pound German shepherd. He does not tolerate misbehavior in my French spaniels.  They are Francaise. He is Teutonic. They are canine revelers. He is a police dog.

When les petite mademoiselles Abbey and Sasha bounce out of their kennel runs for the morning walk on the farm, der oberst hauptmann Gus stands waiting. Each of the boisterous ladies runs a circle around him. He barks twice. They stop and drop. He tilts his head and utters his guttural yowl. They dash across the yard to the weedy edge of the dry run, squat, and piddle. He sniffs his approval and points to the lane leading up to the hayfield. They dash away.

Gus turns and looks back at me. “Kommen sie, schnell!” he orders. I kommen. Schnell.

Before Gus took command, the morning walks were not so orderly or well-mannered.  Abbey has always been full of piss and vinegar, and every day for two years she has harassed and tormented Sasha. She likes to irritate me, too, always dancing on the edge of obedience, not blatantly ignoring my commands but obeying them lackadaisically in her own sweet time.

“Stop!” I would shout at Abbey as she bumped and pushed Sasha, pulled her ears, head-butted her, and did a little jab-and-dodge taunting. After two or three “Stops!” Abbey would cease and desist until she thought I was no longer watching. Then she’d be back at it. If I tried physical punishment, she would cry and squeal and passively threaten to file a complaint with the ASPCA, but it did not change her attitude one whit.

I had no idea how to correct her behavior. Gus did.

About a month ago, Gus joined our dog pack while his owners, our daughter and her family, are moving from Japan to Nebraska (now there is a potential essay about cultural shock). Despite his size, Gus is a lap dog, a teddy bear, but a dedicated family dog. A rescue dog with a bit of collie mixed with his shepherd genes, Gus is constantly herding, guarding and worrying about us.

Gus also worries about our duo of French spaniels. He worries that they are simpletons and clowns, the ne’er-d-wells of the canine world. He sized them up when he first met them, and he immediately pegged them as fools – bird hunting idiot savants with no other useful skills or purpose in life. And no appreciation for discipline or proper behavior. In short, French.

Gus showed no animosity toward them, only condescension. They romped around him, licked his face, sniffed his rear, rubbed against him, stretched out on their bellies, barked. He looked at me askance. “You approve of these antics?” he seemed to ask.

He tolerated them, and me, for three days. Then he took charge.

I know nothing about the characteristic behavioral traits and personality of the German shepherd breeds. Sure, I have raised and trained more than a dozen dogs, but they have all been bird dogs. The hunting came naturally, all of them eagerly learned a dozen commands, and most of them have had a loosey-goosey, happy-go-lucky attitude about life. Between hunting seasons, we pal around together on the farm, drink beer, talk about hunts past and future, and sometimes sleep together in a pile on the couch in my clubhouse.  Bird dogs, in my experience, are up for anything you want to do, especially if it involves a little craziness.

German shepherds? No. That is not what they are about.

Once Gus understood that I disapproved of Abbey’s manic morning behavior, he took corrective action. When Abbey blasted out of her kennel door and began to badger Sasha, Gus imposed himself between them and barked once. Even I, who speak no German at all, recognized the bark as “Nicht mehr!” Abbey did not nicht.  Instead she gave Gus a playful push with her front paws and said, “Mon chérie, I am the princess here, and I do as I please.”

Gus stood stiff-legged over Abbey’s prostrate body as her head slowly cleared from the spinning caused by a high, hard tackle followed by a double somersault under a seventy-five pound rolling pin. “Sheissvogel!” said Gus. “Your princess days are over. Now you do as I say.”

He let Abbey up, and she gave a good shake to remove the dirt and grass from her coat. She put her nose in the air, and looked to me for support. “You deserved it,” I told her.

As we walked up the lane to the hayfield Abbey regained her debutante attitude and ran bouncing toward Sasha, ready to jump on her and wrestle.

Thump-a-tumble-thud!  Bird dog down.  No discussion, no warning, no exceptions, no remorse.  You will obey orders, Gus’ body language clearly said, or you will go rolling.

And that was that.  Abbey, and Sasha for that matter, has sworn off any behavior that resembles harassment, torment, sparring, teasing or horseplay. Gus makes the rules, and they play by the rules.

This was a great achievement, and I have expressed to Gus my gratitude and admiration for his excellent training work.  It is a technique I cannot exactly duplicate since I doubt, given my age and infirmities, that I could run Abbey down, tackle her, roll her over a few times, and pin her to the ground under me. But it did teach me that one must take immediate and direct action and be unfailingly consistent in applying correction if you have a dog that challenges your authority, regardless of how sweet and affectionate the dog may be.

With a few more weeks of work, Gus had Abbey squared away on a whole range of issues. It will be interesting to see if she does any backsliding when he leaves the farm for his home in Omaha.  I have already cautioned Abbey: “I know where Gus will be living, and I can bring him back to the farm anytime you get too big for your britches.”

All well and good, but last Saturday the story of Gus took a new twist. I had mowed for about three hours on a hot day, a chore Gus seems to love. He follows behind me and inspects the quality of my work, I suspect, as the DR Mower drags me up and down the grassy hillside. We sat in the shade that afternoon and shared a bottle of water during a fifteen-minute break. When I got to my feet, still overheated and panting, Gus moved between me and the mower.

“Time to do the rest of the hill,” I told him as I patted his head and reached for the ignition key.

I nicht-ed. Plenty of time to mow after I put him back into his kennel run, I reasoned. No use risking a roll down the hillside with a German shepherd on a hot day.

Addendum. Gus is named for Argos the faithful dog of Odysseus in Homer’s epic story The Odyssey. Renown in his prime for his strength, speed and tracking ability, Argos had become ill and feeble from the ravages of age and neglect during the twenty years that Odysseus wandered and struggled to return from the war in Troy to his home country of Ithaca. Of all Odyesseus’ subjects when he ruled as king, only Argos recognized him when he entered his home disguised as a beggar. Argos had only strength enough to perk his ears and wag his tail as Odysseus walked by, and then lay down and died, his life fulfilled now that his master had returned at last.

Gus the Enforcer has many noble and endearing traits, but great hunting ability and steadfast loyalty do not appear to be among them. As far as I am concerned, his skills as a peacemaker and arbiter of his peers’ behavior are far more valuable qualities.

1 Response to Gus the enforcer