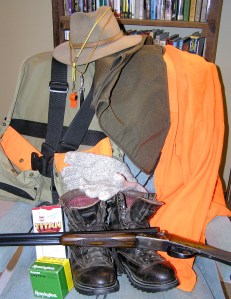 To become a Crazy Old Coot, you need bird hunting attire and gear that is “eccentric.”

Life’s long parade of years and the trials and tribulations of fifty-plus seasons of bird hunting have shaped me. I have become a man of great dignity and character, the epitome of acquired wisdom, balanced temperament, sound judgment, keen perception, singular intellect, insightful reason, common sense, good humor, grace, generosity, compassion, patience, and of course an exceptional understanding of the nature of men and dogs.

At least that is how I like to see myself at this stage of life. Admittedly, there may be a few odd behaviors, peculiarities and quirks in the mix, but nothing that would overshadow the essential nobility of my person.

So I was appalled to learn that one of my long-time hunting companions has begun to describe me as eccentric. This annoyed me greatly at first, but on reflection I realized there may be a grain of truth in his observation, and the wise course would be to accept it.

Eccentric, I decided, is not a trait I should deny but a quality to which I should aspire. Not to the level of Crazy Old Coot, certainly, but with the aim of acquiring a reputation for being a bit erratic.

A few experiences during the past bird season led me to believe I am making excellent progress toward my goal – and with very little effort. The first came in October when I emerged from Minnesota’s Chengwatana State Forest at the end of a morning’s woodcock hunt and met another hunter in the parking area. He was a pleasant enough fellow, but as we made small talk he kept looking askance at my dogs Sasha and Abbey.

“Those dogs of yours springer spaniels?” he asked.

“No, French spaniels,” I said. “Not real common down here. Lots of them in Quebec.”

“No. French spaniels. They’re a pointing spaniel, like a Brittany, but not related.”

“Hmm,” he said. He loaded his chunky Labrador into his pickup and drove away. I imagine he shared his morning’s curious experience with hunting buddies at the bar.

“Met some weird old guy in the woods today. Had a couple of Canadian pointer dogs. Double-barrel shotgun, too. Wearing gloves with no fingers. Crazy Old Coot.”

That was the day I became truly aware of my potential for eccentricity and vowed to play it for all it is worth.

Appearance is ninety percent of the game, they say, and all of us past the age of sixty can easily assume the eccentric look. Most of us do so anyway, whether or not we make a conscious effort.

Our balding heads, for example. A few years ago, after trimming the dogs on a hot summer day, I experimented with running the Wahl pet clipper over my thinning hair. The result was better than I could have imagined. My head looks like one of those threadbare family heirloom teddy-bears that has been dragged around by three generations of toddlers.

I go three weeks between shearings, which allows little salt-and-pepper tufts to emerge at various places on my scalp. Combined with a snow-white beard, this adds a touch of peculiarity to my appearance that gets me much faster service from medical clinic receptionists and bank tellers.

Choose your own level of personal hygiene, but I will note that the world is more accepting of a clean and well-groomed eccentric hunter than one who might be a homeless vagrant who has become lost on the woods. Shower often enough that you do not smell like a well-used saddle on a sweated-up horse.

As to your bird hunting attire, here are some suggestions that have helped me in the pursuit of eccentricity.

Hat: A fedora-style felt hat is a good start, a style that is a blend of Fred Bear and Indiana Jones. Mine is a Stetson Three-River, I think, but it is twenty years old and so beat up and stained that I can no longer read the label. Some states require orange headgear for bird hunting, so you may have to wrap a couple turns of orange plastic marking take around the hatband. Wonderfully eccentric.

Vest: Avoid vests from Orvis or Filson. Those are for wealthy, middle-aged, weekend hunters who are doctors and lawyers and accountants. Wear a strap vest, which can be worn over top of any number of layers of shirts without restricting your shooting motion. It has the added advantage of revealing rather than concealing the rest of your odd attire, and it has enough pockets, loops, clips and pouches to hold all the curious gear you’ll want to pack along.

Compass: From your vest loops hang one aluminum-cased Engineers-style compass and one plastic Silva-style map-reader compass. One of the floating globe compasses that pin onto the shoulder strap of your vest is a nice touch, too. Never, ever carry a GPS unit.

Boots: Brown leather, not camo. Six-inch boots are good, eight-inch better. They must look battered, as if you have worn them through a few hundred miles of the roughest bird terrain. Use a one-inch dowel rod to beat the hell out of new ones until they look as though they have done at least five years of service.

Gloves: Best if you wear no gloves at all, even if the temperature hovers near the zero mark, but if you must wear gloves, choose the rag wool fingerless type. As a concession to the dangers of frostbite at our age, you may wear a leather, insulated glove on your lead hand and the rag wool fingerless glove on your trigger hand. Allow your dogs to chew the wool gloves so they have the proper aroma.

Trousers: You can wear jeans, heavy wool trousers, light canvas work pants – chinos if you want – as long as you wear brush chaps over them. The chaps should be frayed, split, and ragged. If you buy new ones, get the dowel rod and some coarse steel wool and have at it.

Shirt: Bowing to hunting regulations, you must have some orange on your shirt, so take this nuisance to the limit and wear a shirt made entirely of that awful hunter orange cloth. When new, wash it six or seven times until it becomes faded and nappy and can easily pick up burs and seeds.

Gun: Although there is much to be said for the oddity of carrying a Browning Model 12 pump gun in 12 gauge with a 30-inch full-choke barrel, our goal is to be perceived as a wise and practiced Old Coot who may be crazy but has accumulated a wealth of hunting lore and skill. So you are going to have to shoot a few birds occasionally, and at our age we’re not going to do that with an eight-pound cannon.

I recommend a side-by-side double, preferably a working man’s American-made gun from the early 20th century because your gun must look weathered and worn and beaten, and not many of us are going to do that to a $20,000 English best-quality double. I advise 16 or 28 gauge guns for the obvious reason that 12 and 20 gauges are too conventional.

Dogs: You should choose a pointing breed, not a retrieving or flushing breed dog. Although an argument can be made for a ill-mannered Chesapeake retriever or hyperactive springer spaniel if you let the dog ride in the cab of the pickup regardless of how muddy and you teach it to share your sandwich and drink from a thermos or beer bottle.

If you choose a pointing breed, it is perfectly fine to hunt over the traditional breeds – English setters and English pointers – if you have several of them. If you cannot put at least four setters or pointers on the ground, you must go with a more unusual breed. The German shorthair pointer, Brittany, Gordon setter, and even Vizsla have become so common that you will achieve, at best, fringe-eccentricity if you hunt over them.

I recommend a Weimaraner, Munsterlander, pudelpointer, Drahthaar, Griffon, or my personal choice a French spaniel. If the casual bird hunter cannot identify your dog, let alone pronounce its breed name, you are on the fast track to a solid reputation as strange Old Coot.

Once you have acquired the look of an eccentric old hunter, add the characteristic speech pattern and cadence. In general, say as little as possible. Respond to questions with only a nod, which is second-nature anyway to those of us who have lost most of our hearing. If you must speak, limit yourself to simple words such as “Yah,” or “Shoor,” or “Mebbe.”

When asked about your day of hunting, never mention numbers, such as “I got four grouse.” Say “a few.” All distances should be “a little ways” and all times should be “a while back.” An entire summary of the morning’s hunt, therefore, could be, “Yah, we got a few, a while back, just a little ways in, mebbe.” In a lengthy conversation, it is good to subtly mention that you load your own shells, train your own dogs, do your own gunsmithing, and brew your own beer.

Describing the eccentric hunter’s pickup truck is beyond the scope of this essay, but it should have a dented tailgate and a weathered topper. Have several old hand-made wooden boxes in the bed, each with sturdy hinges and latch. At least two should be secured by rusty padlocks.

Oh, and chew on a cigar. It never hurts to add a cigar for effect.

That should be all you need, and it’s easy. Heck, I did it myself without even trying and seem to have struck the right balance. My hunting companions think I’m eccentric, but no one ever calls me a Crazy Old Coot. To my face.
________________________________________________________
Sidebar 1: Although this essay is tongue-in-cheek, I am sincere when I recommend bird hunting over a French spaniel, especially one from breeder Paul Fischenich who owns Minnesota French Spaniels. Learn more about the French spaniel breed and Paul’s family-operated kennel at:
http://www.minnesotafrenchspaniels.com/

Sidebar 2: If you enjoy reading hunting stories, you may like my novel, Hunting Birds, available in both paperback and Kindle edition at Amazon.com.