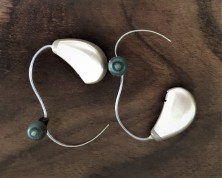 I wear hearing aids, the type that has tiny microphones that amplify sounds. These help, but do not restore your hearing.

Most of all I miss the birds singing in the early morning.

Many other sounds are lost to me since my hearing faded and was gradually lost over the past 15 or 20 years: almost all music, the evening cries of coyotes as they set out on the hunt, the crunch of dried leaves on the woodland floor as a deer approaches my tree stand, the flow of fast water over boulders in a stream, the ripping-canvas whoosh of wind through mallards’ wings as a flock lands on the pond, the whistle and flutter of a rising woodcock, the sweep of the wind through prairie grass, the rustle of cool afternoon breezes through trees in full leaf, the shrill of a soaring red tail hawk, and the voices of my grandchildren and most women that fall outside my audible range.

On the upside, there are several unheard noises that could be regarded as a blessing: worrisome squeals and clatters and ticks from my old pickup truck, whistling teakettles, alarm beepers on microwave ovens and clocks, most on-screen dialogue and background music, dripping water faucets, the squeak of the stairs in our old farm house, and strangers’ disparaging remarks muttered behind my back about my lack of fashion sense and proper grooming. And, of course, political advertisements.

But in general, hearing loss is bad. Terrible.

After years of continued deterioration I am not yet totally “stone deaf,” but my hearing loss is about 60-70 percent in the left ear and about 30-40 percent in the right ear. For the previous dozen years I have worn hearing aids, the type that has tiny microphones mounted on a wire loop behind the ears that amplify sounds.

Unlike the eyeglasses that, while annoying, restored my failing vision some 25 years ago, hearing aids do not bring back your hearing. You will not regain it. Instead, you experience new sensations of sounds, a whole new world of sounds, not much like those you heard when your sense of hearing was intact.

In the course of a few months your brain trains itself to identify these sounds: the voices of people you know, a hay baler in the field, your dog whistle, crumpling paper, the deep throated hoot of an owl, the squawk of a flushing pheasant, a chainsaw, automobile horns, the bellow of an Angus bull, an air compressor, the weird sounds produced by a laptop computer. But none of these truly resembles the “original” that you remember. On the other hand, you can no longer hear the original sound, so it may be better to learn and discern its distorted substitute than to hear nothing at all.

The strangest “hearing” sensation for me has been classic rock music of the 1960s and 70s. That music sounds remarkably the same, but in truth I am not hearing it in my ears, I am “hearing” it in my memory. But any new music? Forget it.

One of the most jarring adjustments to hearing aids – although you never completely adjust to it – is loud noise. Not the common, run-of-the-mill loud noise such as a semi-trailer truck engine-braking on the hill descending into your town, but the sudden and unexpected blast of noise, the noise-equivalent of gouts of blood from a ruptured artery, the noise-counterpart of a plunge from a ninth-floor balcony.

The tiny microphones of the hearing aids are programmed to shut down at 85 decibels, which is about the level of noise roaring from the lawn mower you are pushing, but it seems to me the amplified noise shut-off is not instantaneous. Also, the microphones are omni-directional, and that means you cannot tell from which direction the violent noise is coming, which is doubly unnerving. I liken the sensation to unexpectedly touching a bare 110 volt electrical wire.

These blasts of noise can range from a gunshot to a dropped tray of glassware, from the explosion of a Harley-Davidson engine’s start-up to a child’s scream, from an action movie’s sound track to a smoke alarm. Because you rarely hear these types or decibel levels of noise, your brain never learns to interpret the sudden detonations of sounds, so they are a cacophony of terrifying confusion and misdirection.

If you wear hearing aids for a six or seven-hour period of time, you will likely be tense, anxious, irritable, on edge, and short-tempered. Do not expect your family and friends to understand this. It’s just everyday noise, isn’t it? No, not to the hearing impaired. But they will not regard your hearing loss as a handicap. Neither will medical insurance providers or Medicare. Deaf? Your problem.

The gradual narrowing of my range of detectable audio tones is worsened by a malady my audiologist identifies as word recognition, also known as speech discrimination. At normal voice-levels conversations I misidentify many words. This has caused not infrequent gaffs; incorrectly hearing the words “two nickels” as “two nipples,” for example. A lot of my once-clever banter in social situations has been replaced by the phrases “What did you say?” or “Could you repeat that?” or “Pardon me?” Or lapses into total silence in crowded room conversations.

The era of the pandemic mask has aggravated the problem of hearing loss. Over the years I have unconsciously taught myself to read lips. Conservatively, that is how I understand at least half of what people say. But you cannot read lips when the person you are talking with is wearing a face mask. I am not advocating going without a mask, especially at casual conversation distance. I strongly advise everyone to wear a mask. Much better to repeat yourself three times than to contract coronavirus.

But it does make “hearing” much more difficult.

There is little I can do about my impairment. Hearing aid technicians are making progress on cochlear implants, but those devices function by converting sounds into electrical impulses that stimulate the ear’s cochlea and are interpreted by the brain as sounds. I am not in a hurry to retrain my brain once again to recognize an entirely new palette of sounds, so I will struggle along with limited hearing as long as possible.

I ask a favor of all those who have to deal with someone whose hearing is failing. Please speak a bit louder and enunciate a bit more clearly so we can understand you. This is a lesson learned in hunting camp with members of the Over The Hill Gang, many of whom have diminished hearing ability and can mistake the phrase “Throw us that pair of needle-nose pliers” for “Throw that pint of gas on the fire.”

Even with my level of hearing loss I can hear, fairly well, the roar and crackle of towering flames. Bird songs in the morning and coyote calls in the evening, not so much. And I miss the “music” of the wild.

More essays and stories about life in the North Country are published in my six collections of essays and three novels, available through Amazon.com at  Jerry Johnson Author Page