There’s a point (of impact) to all this

Certain that the old Lefever 16 gauge must be shooting low (I missed two shot at pheasants one cold December morning) I spent this overcast January afternoon doing a point-of-impact test to prove the inaccurate shooting was the fault of the gun, not I. The patterning sheets did not vindicate me, however. 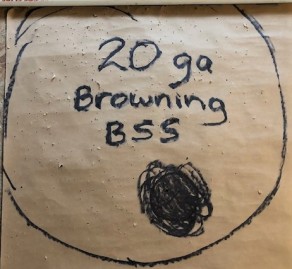 My most trusted and most used double gun, a Browning BSS Sporter in 20 gauge, has been reliable this fall, taking most of the roosters Abbey has found and pointed. So it was the “baseline” gun for yesterday’s pattern test. If I could determine where it was placing its charge of shot on a pattern sheet, I could compare that result with the point-of-impact pattern of the Lefever and then adjust the Lefever’s stock dimensions to correct its errant ways.

I hung two pattern sheets on the side of the old corn crib foundation, one for the test of the BSS and one for the test of the Lefever. I backed off about 20 yards, slightly downhill, and using the same step-mount-fire sequence I would use to shoot at a flushing pheasant I fired three rounds from the right barrel of each gun at the center dot of its designated pattern sheet.

The truth was immediately apparent, but I took the pattern sheets into the workshop where I could use a felt tip marker to outline the respective patterns to confirm what I already knew – and eat humble pie. The 20-gauge BSS and the 16-gauge Lefever throw virtually identical patterns to virtually the same point of impact.

This was discomfiting because:

1) I now know that any bird I miss when shooting the Lefever will be my own fault;

2) since the Lefever does not require any corrective work I do not have a “project gun” to tinker with this winter.

More essays and stories about bird dogs, bird hunting, bird guns, and life in the North Country are published in my six collections of essays, available through Amazon.com at  Jerry Johnson Author Page