My very own 25-ton wood splitter 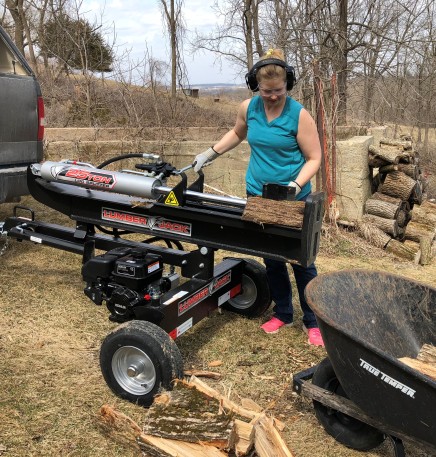 My daughter is much better, and safer, than I when operating  motorized equipment.

LATE WINTER of 2018-19 was a terrorist with an atomic weapon. Fifty inches of new snow, six weeks of continuous sub-zero temperatures – some days as low as -40 Fahrenheit, ice-coated driveways, 30-40 mile-per-hour winds that snapped brittle-frozen limbs from trees, and day-after-day-after-day of dark skies clotted with roiling gray storm clouds.

Is it any wonder that we burned the last of our winter supply of firewood before the end of January? Or that the LP gas delivery truck got stuck in the snowbank at the top curve of our driveway?

No, it was not a pioneer-era hardship to survive three days in an old farm house with the thermostat turned down to 55 to stretch the last of the LP gas supply while I hacked and shoveled rock-hard ice walls to widen the path for the LP gas truck, but it wasn’t exactly a day at the beach for an arthritic old body either.

The three-layers-of-clothes discomfort was made worse by my shame at having failed to stockpile enough firewood the previous autumn. I admit I became careless about our firewood supply because we had had three “open” winters in a row, years when there was relatively little snow accumulation. On warm days, I could easily get to the stacks of logs that were cut but not yet split into chunks small enough to fit the woodstove. Also, it’s easier to split logs in January when they are frozen, especially when the splitting tools are a maul, eight-pound sledge hammer, wedge, and ax.

So I neglected firewood chores in October and November, knowing I could catch up in January on those sunny mid-winter days when I had nothing much else to do. But there were no sunny days this January. Or February. And the stacks of unsplit logs were buried under six-foot snow drifts. The logs I could exhume were coated in an inch of ice from which the splitting maul rebounded with a force that made my shoulders pop and my wrists throb.

As I remember, it was on January 31 (day’s high temperature -6, low -37, 15 mile-per-hour wind, one inch of new snow falling) that I tried to dig out and split some wood, and decided a hydraulic, gasoline-engine, 25-ton log splitter would be a good addition to our farmstead. I went online to learn more about log splitters, and my fixation became more wildly neurotic than Mister Toad’s fascination with a motorcar.

I announced to my beautiful blonde wife my determination to purchase a splitter to lighten the months-long labor of cutting, hauling, and splitting the firewood for the coming winter. I intend to have at least eight cords of firewood – double our normal supply – stacked and ready for the next winter. She was less than enthusiastic about this “boys need toys” compulsion, partly because she has had to deal with my propensity for injuring myself with motorized equipment and partly because she realizes that at our age, we should not extend our days on the farm but should consider moving to a comfortable small (and woodstove-less) house in town.

Both reasonable contentions, but when I become enthralled with a new adventure I am not reasonable. Selfishly adamant and insistent, I sold an excellent varmint rifle (okay, I admit this was not a great sacrifice since I will never varmint hunt again) so we could use the money to buy a splitter. And I found the perfect one on sale for $800 at the farm supply store. Fate was smiling on me, it seemed, because we arrived just in time to buy the last one the store had in stock.

That boon, however, was the last smile Fate cast my way on this day.

The yard crew at farm supply, a duo I uncharitably named “Homer and Jethro,” had some difficulty loading the splitter into the pickup due to tight fit under the topper. Homer and Jethro were not skilled and experienced forklift operators, and when it became evident they were about to cause some serious damage to the pickup and/or its topper and/or the new log splitter and/or my person, I frantically waved their loading efforts to a halt and told them, “Good enough, I’ll handle it from here.”

With some maneuvering of the splitter I was able to close the tailgate, but the tail end of the splitter’s beam still protruded out the back. The topper hatch would not close, so I lashed it down with a couple bungy cords, and away we went. About 20 miles into the drive home we hit a pothole, the truck bounced, the hatch flew up and slammed down, and the glass smashed. This was a $160 mistake, the folks at the auto glass repair shop tell me. Damn.

We arrived home in a steady rain and I suggested the splitter remain in the pickup until I could unload it the following afternoon, when my wife would be gone and I could commit my usual heavy equipment follies unwitnessed. She said, based on her overly pessimistic conjecture that I would kill or at least severely injure myself in the unloading process, that we must unload it now so that she could, if necessary, call an ambulance. Okay, fine.

Did I mention how heavy this splitter is? No? Well, let me state right here that it is really *#@&ing heavy. Using a pair of one-ton come-along cables and winches, I lowered it down the loading ramps six inches at a time and am pleased to report it did not break free and roll down the driveway in kamikaze fashion. Both the splitter and I were sopping wet by this time, two soggy dogs were jumping on me every few minutes, and I had fallen off the tailgate while re-attaching one cable. I was no longer enamored of the benefits of a 25-ton, gasoline-engine, hydraulic wood splitter, and my glowing pride of ownership was dimming.

At last I had the machine safely on the ground, and to move it onto storage in the garage we hooked it onto the pickup trailer hitch. After the miserable winter of 2018-19 was the hitch protector solidly sand-and-salt cemented into the hitch channel, you ask? Well of course it was, but at this point of the day I had no reservations about pounding it with a two-pound sledge hammer until it broke free. I’ll buy a new one the next time I’m at farm supply.

I bought a 12-pack of cheap beer and invited my daughter to drive to the farm for the weekend to help me split and stack firewood. I’m not too incapacitated to do it myself, you understand, especially with the benefit of this new splitter, but she is better at operating motorized equipment than I am. And it might be a good idea to have someone handy to call for an ambulance, just in the very unlikely case that something should go wrong.

Maybe, just maybe, I should move off the farm before the urge to buy another piece of equipment seizes me.

2 Responses to My very own 25-ton wood splitter