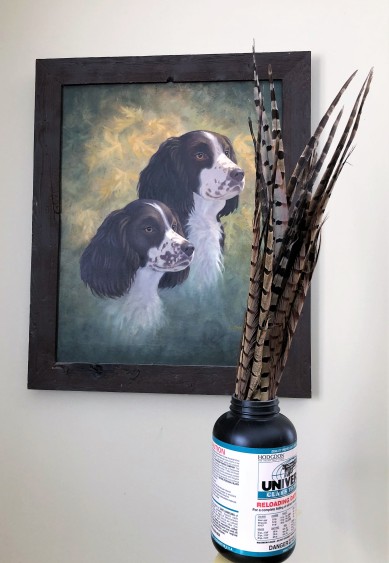 “Hunting,” the Old Man said, “is the noblest sport yet devised by the hand of man. There were mighty hunters in the Bible, and all the caves where the cave men lived are full of carvings of assorted game the head of the house drug home. If you hunt to eat, or hunt for sport for something fine, something that will make you proud, and make you remember every single detail of the day you found him and shot him, that is good too. But if there’s one thing I despise is a killer, some blood crazed idiot that just goes around bam-bamming at everything he sees. A man that takes pleasure in death just for death’s sake is rotten somewhere inside…”

From The Old Man and the Boy by Robert Ruark

SPORT HUNTING has been taking an awful beating from the politically correct denizens of the social media universe of late. The bashing of hunters elicits much empathy from urban dwellers who are among the ever-increasing part of the population that is divorced from the land and the harsh realities of nature in the wild, and those of us who pursue the blood sports would do well to take heed of some of the reasons for their ire.

If we take a moment to smooth our feathers and step back from the knee-jerk response we have to anti-hunter rants, we should concede one point of the argument: not all of us are “sportsmen.” Somewhere in the development of the creed of sport hunting a noble concept was introduced: hunters are caretakers and guardians of game animals they pursue. That is a virtuous goal for the hunting fraternity and an admirable image, but 50-plus years observing hunters has revealed to me that it just ain’t so.

About a third of hunters are truly concerned about wildlife conservation (they get involved in habitat development and management and contact their local, state, and federal representatives about wildlife issues), about a third are passively involved (they drop $500 at the annual Pheasants Forever banquet and console themselves that someone else will use the money for conservation projects), and about a third go afield with the attitude that they are entitled to reap without sowing, harvest without planting.

Second, we must disabuse ourselves of the notion that the vast majority of hunters obey hunting rules and regulations, that our compliance is based on a sportsman’s ethic imbued in us by a hunter safety course or from reading articles in outdoor magazines. Again, it just ain’t so. I am sure you have anecdotal experiences that confirm many hunters go afield with the mindset of “kill a limit, however I have to do it.” My two most recent examples are conversation overheard in a northwoods bar and grill. “I couldn’t see it very well, but it might have been a buck so I just opened up on him with my AR…,” and “Yeah, I shot five woodcock today, but I only got one yesterday, so I killed my limit this weekend…”.

If we take an honest look at ourselves, we’ll realize that the declining respect for hunters in our communities is a self-inflicted wound. Much like farmers who want, as a group, to proclaim themselves “stewards of the land,” hunters who want to stake out the moral high ground of “noble sportsmen” have come to be perceived as hypocritical. Nobody believes those platitudes anymore, and they shouldn’t. The evidence of abuses is ubiquitous.

Because a significant minority of hunters act unethically, it’s a short step for society to conclude that all hunters, and all types of hunting, are morally wrong. We could shrug our shoulders with a “What do I care?” attitude about the growing opposition to the blood sports, but only five to six percent of Americans take part in sport hunting (based on number of hunting licenses sold), and the 95 percent that do not will actively and passively exert ever greater social and political pressure to limit hunting opportunities.

Two indicators of this pressure have been obvious in my lifetime: the steady decrease in land (both private and public) that is open to hunting, and the subtle reprove that hunters encounter in social situations. Thirty years ago, getting permission to hunt was a matter of knocking on the landowner’s door; there were fewer “No Hunting” signs on fence posts, and very few “Leased Hunting” signs. When we walked into a roadside café in November, dressed in hunting garb, at least a couple patrons would ask, “Have any luck this morning?” Now we’re often greeted with stony silence and awkward stares.

How did this anti-hunting attitude develop over the past 50 years? I like to pour fuel on any anti-hunting discussion by blaming two American icons: Walt Disney, and the National Rifle Association.

Disney, and his acolyte wildlife documentary film producers, present an unrealistic anthropomorphic representation of wild animals: bears as cuddly creatures that eat only berries and roots and run an open-air kindercare center for their cubs; eagles and hawks and soar and swoop but never quite manage to catch the rabbit. These portrayals are at odds, to say the least, with the grizzly bear’s practice of following elk herds in the spring to kill and feast on newborn calves, and the red tail hawk’s efficiency in striking, killing, dismembering, and eating a snowshoe hare. The takeaway for the “Disney” film viewer is that predators are evil, and human hunters are the most evil of all.

The NRA has done even more to drive people into the anti-hunting camp. Its insistence that any person can go armed with any weapon in any circumstance for any reason has contributed a general fear of all firearms, and of all persons who might be carrying firearms. We hunters have an affinity for firearms, and although virtually no hunter would wander around in Wal-Mart armed with an AR-15 assault-style rifle or a semi-automatic pistol, the public lumps us in with those lunatics who confuse threat and intimidation with Second Amendment rights.

Increasing opposition to hunting also has roots in the pace of urbanization. Seventy years ago, about 36 percent of Americans lived on farms and in small towns; that percentage has decreased to about 18 percent. Over the course of my lifetime, the percentage of people who have habitual contact with wild lands and wildlife has been halved. Even in my part of the nation, the rural Midwest, three out of four families now live in cities.

People living in urban environments are less likely to experience wild places and wild things and are far less likely to participate in the blood sports. This does not necessary mean they are anti-hunting, but it almost certainly means they are not pro-hunting.

One outgrowth of separation from the land has been the commercialization of hunting. Hunting leases, hunting preserves and lodges, guided hunts, pay-per-gun hunts, safari hunts – all these for-profit ventures are marketing to what I call the “Orvis Hunting Coat Crowd,” the clique of wealthy hunters who can participate in the sport in the same way they go on Rocky Mountain skiing holidays, shipboard cruises through Caribbean or Alaskan or Australian seas, fly-overs of Brazilian rainforests or Andean mountain ranges. It is not so much participation as recreation: much creature comfort, little exposure to the harshness of the wild.

A helicopter drop-off in British Columbia or Tanzania where a guide takes you to the place you will have a set-up shot at a trophy head of game — is that hunting? I think not. Photos of a well-dressed and coiffed hunter sitting atop the crumpled remains of a giraffe, magnum rifle in hand and beaming smile, do not depict any valor or virtue to me. And if someone like me, who has been an avid hunter more than 50 years, regards those “hunts” as unethical, how does it play with non-hunters?

The irony, or perhaps the tragedy, of this commercialization of hunting is that it will not threaten the future of sport hunting for the wealthy elite; money always has its way. The weight of public sentiment will come down on the working-class hunter: public hunting areas will continue to shrink, access to private land will continue to decline, and opportunities to hunt will diminish.

My generation was fortunate to live through an era when hunting was still in the mainstream of American life. Hunting as a way to feed our families had passed from the scene even before our time. Sport hunting, the type of hunting in which we engage today, is mostly symbolic, an avocation evolved from the vocation of our grandfathers and great-grandfathers who depended on their hunting prowess for sustenance. Yes, we enjoy the venison we bring home, but we do not pretend that it is a less expensive source of protein than the beef or pork we can buy across the grocery store’s meat counter.

The nobility of the sport? Maybe it is the cultural memory, a day of reenacting the lives of those men in generations long-past, going afield with the very same shotguns or rifles they used to take game “…to eat, or hunt for sport for something fine, something that will make you proud, and make you remember every single detail of the day you found him and shot him…”.

Maybe it’s our last stubborn hold on the land, wild places, wild things, as we truly know them.

More essays and stories about hunting and life in the North Country are published in my five collections of essays, available through Amazon.com at  Jerry Johnson Author Page