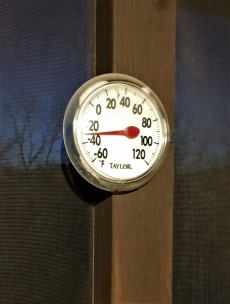 An early morning walk with birddogs in last week’s -5 degree weather made me painfully aware that we had moved into winter. This morning’s pre-sunrise walk with the grim hand of the thermometer on the deck  pointing to the -30 degree mark? That made me think we had moved to a different planet.

The Winter Planet resembled the Earth in most ways. The constellations fading into the brightening cerulean sky were the same stars we see from Earth. Except for the trunk of one elm tree that had cracked in the cold of the Winter Planet night and now hung dangling over the driveway, the woodlands appeared unchanged. Yes, the landscape was covered with almost two feet of powdery snow that had accumulated from three recent storms, but that is not abnormal in the North Country. The windswept limestone bluff bordering the west side of the county road was the same formidable wall of rock and ice. My neighbor’s barn was a familiar black silhouette against the eastern sky.

But I was not fooled: this was a different world, cold as the Arctic and windy as the tundra. Jagged, shattered glass splinters of -30 degree air were driven into my face by 15 mile-per-hour gusts. My bootsteps on the packed snow of the driveway sounded like the hull of the Titanic scraping the unyielding side of an iceberg. The vapor of each gasping breath froze into a brittle cloud in an instant, an ice phantom that cackled and shrieked as it was carried away by the cruel wind.

These, and I have known all of these, were surpassed by the cellular-motion-stopping cold of this morning. This was Svalbard cold, Baffin Island cold, Reykjavik cold, Murmansk cold. How cold? The dogs both peed and pooped in the first 10 minutes of the walk and demanded that we retrace our steps as quickly as possible to the warmth of the farmhouse. They are French spaniels, from bloodlines in Quebec, a breed that thrives in sub-Arctic climes and will hunt in the most punishing weather. But this morning was too much for them.

How cold was it? When I took off my mittens and grasped the door handle, my palm froze to the metal and left a small patch of skin behind. It was the inside handle of the storm door.

Abbey stares out the kitchen windows, wondering how and why she has been exiled to a Winter Planet. (Photo by Patti Johnson)

In the kitchen, stoking the fire in the woodstove, I calculated the temperature with windchill: somewhere between -65 and-70 degrees. To be fair, the morning was not that cold. Windchill is a perceived lowering of the air temperature caused by wind on exposed skin. The only bare skin today’s wind could reach was that small, unprotected oval of my face exposed by the eye hole in the face mask of my rag wool balaclava. The rest of my body, every square inch, was covered by at least two layers of winter clothing, and the draw cords of the hood of my jacket were pulled tight.

That did not make breathing any less painful, or prevent the cold from slowly soaking through layer after layer of wool and polypropylene and working its way into my bones. Clutched into fists inside my insulated mittens, my fingers still throbbed. I did not take off my pac boots until I had warmed my feet by the woodstove for 10 minutes.

On the other hand, there was a gloriously beautiful sunrise (viewed through the kitchen window), no pipes were frozen, there was fresh bread and homemade jam for breakfast, and it only took a few minutes to get a fire roaring with some good red elm. I carried a cup of hot, fresh-brewed coffee to my beautiful blonde wife and asked if she planned to get out of bed this January day. She said she had not yet decided. Hibernating for a few weeks might be a better choice. But by 8 a.m. she was up and around, challenging the raw weather of this brave new climate-changed world, outside filling the bird feeder and hanging a suet block.

The cold morning has now passed, the sun is shining, the temperature has risen to its predicted high for the day (minus 17 degrees), a pot of tea is steeping, Sasha and Abbey are sleeping on the couch in the Clubhouse, and I’m tinkering with an old shotgun. All things considered, I’d rather be in Arizona watching a spring training baseball game, but hanging out with dogs in the warm Clubhouse is a good second choice.

Time to adjust to a few weeks of real winter in the North Country. Of whatever planet I’ve been exiled to.

More stories about life in the North Country are published in my five  collections of essays, all available in Kindle and paperback editions at  Jerry Johnson Author Page at Amazon.com, and in paperback edition at Dragonfly Books in Decorah, Iowa, and through IndieBound independent bookstores.

1 Response to On another planet