The rush to betrayal 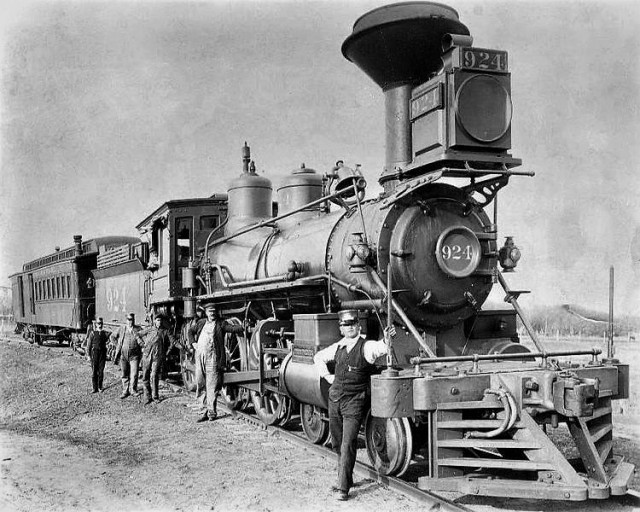 The explosion in the construction of railroads in the 1880s and 90s can be compared to the explosion of digital communication technology in the 1980 and 90s, (photo from WyoHistory.org)

It can be argued that this cycle of pageantry is inevitable; if some clever inventor declines to bring his new creation to the attention of the world, someone else will. But I think this concept of “progress” shows a lack of imagination…

The rush to betrayal

THE RECURRENT, CYCLICAL PAGEANT of the Industrial and Technological Revolutions has been the unrestrained, euphoric whirl of Hubris followed by the somehow unforeseen, devastating flail of Nemesis. For more than 150years, the pageant has mesmerized and mobilized individuals, societies, cultures, nations, civilizations, and eventually all of mankind, to march along at a mad pace, has promised us we are on the one sure path to paradise, and has betrayed us at the end with a push over the brink into perdition.

Gloomy prognosticator that I am, I see the brink opening before us in the current rush to betrayal. Human arrogance about dominion over the natural world has never ended well. Our belief that we can produce miracles of technology that will bend the environment to our collective will has been the marching tune for many a pageant over the past two centuries, and that march has always ended with a plunge into ruin.

Today’s parade is ominously similar to the closing decades of what many historians call the Second Industrial Revolution, from about 1870 until the First World War. The years of the 2020s and beyond will not be a mirror image of that period; the oft-quoted maxim that “history repeats itself” is preposterous. The conditions and circumstances of each era of history are distinct and dissimilar, different in far more ways than they are alike. The pageants of the past were driven by economic, social, political, and industrial forces that have some similarities to those of today, but it is dangerously wrong to believe that “X is exactly the same as Y.”

The impetus for the Second Industrial Revolution was the synergistic melding of coal, iron, steel, mechanical engineering, plant and animal husbandry, electricity, and the emergence of technical education. The phenomenal economic growth convinced industrial, political, social, and financial leaders of that era that anything, literally anything, was within the power of man to shape and control. There are some similarities between the “macro-engineering” feats of Second Industrial Revolution and the “micro-engineering” feats of the current era which may someday be called the Second Technological Revolution.

But some aspects of the 19th century pageant are frighteningly the same as our parade in the 21st century. Human nature compels us, it seems, to repeat the follies of former generations, and one of the greatest follies has always been the belief that we can overpower rather than live harmoniously with the natural world, that we can hurriedly and carelessly rush to accept, to unleash, new technologies without appreciation (or even consideration) of their potential harm.

Much as we like to assign blame for the miseries they inflicted on the masses forced to march in their pageant, these giants of the Industrial Revolution (where do we draw the line between “industrial giant” and “robber baron”?) were as much a product of the confidence and surety of their era as their own egotism and greed. The expectation of the 19th century was that civilization would rise on the strength of science and engineering to overcome every obstacle, to make the world a better place for every person. When the world, in its unforgiving way, opened the chasm into which the parade toppled, I suspect that even the most hardened of this lot of industrialists must have asked, “How did it come to this?”

They must have felt betrayed by some higher power that unraveled all their carefully knitted values and works. A century later, was the same sense of betrayal felt by the chemists who developed DDT, the. medical scientists that produced thalidomide, the nuclear engineers who designed and built the reactors at Chernobyl and Fukushima? Like all who desired to possess “The Ring of Power,” their intent was to do good, but through them was created many a great evil.

It can be argued that this cycle of pageantry is inevitable; if some clever inventor declines to bring his new creation to the attention of the world, someone else will. But I think this concept of “progress” shows a lack of imagination, a limited way of thinking that has been foisted on us by the “laws” of capitalist economics.

Ernst Werner von Siemens wrote in 1887 that the “study of science and the technical application of the forces of nature” need not direct mankind toward a materialism that “makes them proud of their knowledge and power, and alienates ideal endeavours. The deeper we penetrate into the harmonious action of natural forces regulated by eternal unalterable laws, and yet so thickly veiled from our complete comprehension, the more we feel on the contrary moved to humble modesty, the smaller appears to us the extent of our knowledge, the more active is our endeavour to draw more from the inexhaustible fountain of knowledge, and understanding, and the higher rises our admiration of the endless wisdom which ordains and penetrates the whole creation.”

His was a voice in the wilderness. By the end of the Second Industrial Revolution, economic concentration was the standard of industry, and a few mega-corporations owned or controlled virtually all manufacturing, food production, distribution, and marketing. That pageant rushed into the 20th century, contributing mightily to the forces that caused World War I, World War II, a few dozen limited wars, regional famines and disease epidemics, genocides, and lives of abject poverty for three-quarters of the world’s people. The divide is clearly delineated between those who are served by the forces of the Industrial and Technological Revolutions, and those who must serve the forces of those revolutions. There are the rich, and the poor.

But all are part of the pageant in the 21st century, part of the parade of an unsustainable industrial and technological system that is marching toward the brink, promising paradise, rushing to betrayal.

More stories about life in the North Country are published in collections of essays and novels, all available through Amazon.com at  Jerry Johnson Author Page

6 Responses to The rush to betrayal