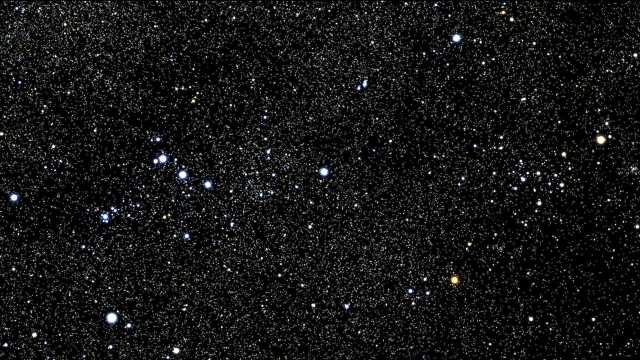 Image from “The future of the Orion constellation”: https://www.youtube.com/watch?v=MK6v9G06Ks8

Blessed with the good fortune to live in the North Country where celestial skies are not dimmed and diminished by city lights, I spend many a night hour sitting or lying at the peak of our hilltop hay field star gazing. On a clear night, the astronomical show playing across the curve of the sky swells my heart when I observe the wonders of this world and shrivels my mind when I contemplate the immense depth of this ocean of a Universe. Especially compared to the shallow pond of my mental ability to understand it.

North Country night skies are far surpassed by the magnificence of the starry dome over the Nebraska Sandhills, one of the least light-polluted expanses of sky in the world. Most years I am able to travel there and devote a few nights to staring in awe at the pitch-dark void of heavens that appear more “three dimensional,” each star and planet coursing bright and purposefully through its own strata of the fathomless deep. There, the glory of the Milky Way assures you, with certainty, the joy of witnessing the natural world makes your journey through this veil of tears worth all hardships, woes, and sadness.

It also makes me aware that I comprehend so little. I see the compositions written by “The Starry Messenger” in the heavens, but I cannot truly read them. Because I do not know the language of the stars that would help me interpret the message.

I long to embrace the science of this Universe as well as the mystery, but that would require a level of mathematical prowess I have not, and probably cannot acquire. I envy the astronomers, the astrophysicists with the mental powers to sense the Music of the Spheres, to “hear” the harmony of those fantastic displays as well as observe the light show.

Scientists (once known as natural philosophers, a more benevolent and less intimidating term, it seems to me) have heard arrangements of this music since the first measures were composed and published by the Polish astronomer Nicolaus Copernicus in the 16th century. His magnum opus, De revolutionibus orbium coelestium libri vi (Six Books Concerning the Revolutions of the Heavenly Orbs), he withheld from publication until the year of his death (1543), knowing it would explode the orderly Earth-and-man-centric Universe that was the basis of Western civilization’s religions, laws, customs, beliefs, and social order for nearly 2,000 years, since the time of Aristotle (384-322 BC) in ancient Greece.

Copernicus proposed that the Sun, not the Earth, was the center of our system, the fixed point around which the Earth and other planets orbited, while rotating on their own axes. Hence the apparent movement of the stars through the night sky; they are not moving, we are. The mathematics used by Copernicus to prove his theorem are complicated, but not beyond my ability to intuit. I can read that music. Over the course of the succeeding 150 years, astronomy became an orchestral symphony.

Based on observations he made using a new instrument, the telescope, which he invented and constructed, Galileo Galilei (1564-1642) wrote and published Sidereus Nuncius (The Starry Messenger) in 1610 and completely toppled the prevailing philosophy of the nature of the Universe. The book described his telescope, his observations of the Earth’s Moon, and his discovery of four moons orbiting the planet Jupiter. Galileo concluded the Copernican, not the Aristotelian, model of the Universe was correct, and he spent the rest or his life under house arrest and threat of death as reward for his achievements.

A more comprehensive understanding of the workings of the Universe, the harmonic movements and intricately weaving interplay of its music, required a whole new mathematical language, differential and integral calculus, created by the eccentric English mathematician-theologian Isaac Newton (1642-1727) and the almost clairvoyantly brilliant German philosopher-mathematician-lawyer-writer Gottfried Wilhelm Leibniz (1646-1716). Bitter rivals, they were both deeply religious and intended their work in astronomy and mathematics would prove that a Christian god was the creator and all-controlling operator of a perfect and unchanging Universe.

In the course of that pursuit they arguably became the primary creators of the scientific system as we know it today, compelling philosophers of the natural sciences to alter the goals of investigation and inquiry; the main objective was no longer to describe “why” a law of nature functions, but “how” it functions. The ancient Greek view of the world ended and so, eventually, did the 2,000-year-old belief that a god or gods held the strings that manipulated the puppet show of the Universe.

Even now, 400 years after the dawn of the age of science, the acceptance of this new Universe, ordered but subject to continual change, is not complete. It is difficult for individuals, and even more difficult for entire societies, to forego certainty and accept the reality of a structured but random world. The human psyche craves stability and surety. That is why oligarchies and theocracies will abound for decades to come, perhaps centuries, tormenting civilization with the self-righteous evils they have always imposed upon freedom of thought and action.

I understand this fear of uncertainty, this clinging to a world of spiritual wonders rather than scientific analysis and reasoning since I am something of a skeptic about science myself. Not because I reject its premise and assumptions (there are natural causes for things the occur in the Universe, through observation and evidence we can deduce how and why those natural causes operate, there is consistency in the operation of natural causes), but because I cannot read the language, advanced mathematics, necessary to understand it satisfactorily. Geometry was easy to grasp, and I was able to master algebra, but calculus was beyond my ken. I suspect that holds for the vast majority of the people on this ever-more crowded and troubled planet. Science is valid, but it can be complicated and difficult. We prefer simple and easy explanations.

Star-gazing on a summer night, I see The Starry Messenger and want not only to be enthralled by the enormity and magnificence of the heavens but also to understand the intricate clockwork of the Universe. Near the end of his life, Sir Isaac Newton wrote: “I do not know what I may appear to the world, but to myself I seem to have been only like a boy playing on the seashore, and diverting myself in now and then finding a smoother pebble or a prettier shell than ordinary, whilst the great ocean of truth lay all undiscovered before me.”

If Newton, the greatest mind in the Western world’s history of natural philosophy and science, thought himself incapable of discovering the great truths of the Universe, what chance do I have of understanding even the most basic natural laws that govern it? I watch the stars and planets wheel through the heavens, and although I accept the science I surrender to the wonder.

More stories about life in the North Country are published in my five collections of essays and two novels, all available through Amazon.com at  Jerry Johnson Author Page

13 Responses to The Starry Messenger