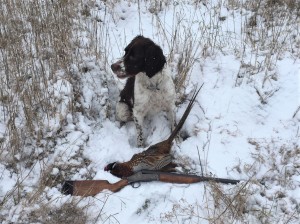 Abbey began to lecture me: “Wahrl-arn-wahrl-yawl!” which, translated from spaniel French to North Country English means “Pheasant season only lasts eleven weeks, you know, and every day spent in the Clubhouse is wasted, lost forever and cannot be regained.”

Huge snowflakes were falling this morning as the first real winter storm of December descended on The North Country, beautiful but not the sort of day I would choose to go pheasant hunting. The temperature was only a few degrees below freezing, so the snow cover was wet and clingy and just plain sloppy. And a cold wind was blowing from the northwest.

I’ve reached that time of life when I want recreation to be fun, not misery.

The dogs had a different opinion. Released from their kennel runs, Sasha found a half-frozen puddle of slush to roll in while Abbey ran eleven circles around me and begged me to chase birds with her. Scenting conditions, she said, were perfect, and the pheasants would be hunkered down in the thickest patches of grassy cover as they waiting out the snowfall.

She was right, but there were fewer risks for her. She has four-footed drive, a low center of gravity, and the strength, energy, and enthusiasm of youth. I have two-footed drive, a relatively high center of gravity, and though my enthusiasm often matches hers my strength and energy are waning in my senior years. As another member of The Over the Hill Gang likes to remind me, we have lost our catlike quickness and grace.

I was adamant about not going hunting in the snow, but Abbey wore me down. She was not appeased by a mile-long walk around the farm that left her soaking wet from running through snow-topped stands of brome and weeds, and left me leg weary and a bit dizzy from the herky-jerky dances I perform while struggling to keep my balance after tripping over gopher mounds.

When we returned to the farm yard she refused to go with Sasha (13 years of age and retired from the hunting trade) into the Clubhouse for a mid-morning nap. She began to lecture me: “Wahrl-arn-wahrl-yawl!” which, translated from spaniel French to North Country English means “Pheasant season only lasts eleven weeks, you know, and every day spent in the Clubhouse is wasted, lost forever and cannot be regained.”

I conceded, opened the door of the pickup, and she leaped in, smug and righteous. Little did she know that we were going no farther than the Coon Creek Wildlife Area, about a mile from our farm as the crow flies and three miles by slippery, snow-packed gravel roads. There are few pheasants at Coon Creek WLA, almost none this late in the season, and my only intent was the let her run off steam for an hour or so. This day would not be a true pheasant hunt, it would be a wintry hike through a couple 20-acre plots of restored native grass prairie.

Making the task as easy as possible, I took the ancient single-shot, break-action, 12-gauge Eastern Arms shotgun that I had renovated over the summer as a “beginners’ gun” for my grandchildren. The right gun for the day because 1) I did not care if it was exposed to bad weather, and 2) it weighs only six pounds.

Since there was no possibility of shooting a pheasant, I briefly considered forgoing shotshells, but having had my hubris knocked down by gamebird nemeses more times than I like to recall, I rummaged in the cupboard for some 12-gauge loads. I found a crumbling box of “Long Range No. 6” — high brass hulls with 1 1/4 ounce of shot, much heavier loads than I shoot these days. But I reasoned that a couple decades of aging had probably reduced the potency of the gunpowder, making these the equivalent of less powerful field loads.

The price sticker was worn and smudged, but with a magnifying glass I could read: “Coast-to-Coast Hardware  —  $7.49.” Scrawled in red pen below was the sale price: “$6.49.” Must have bought this box of shells at the end of the season 20 or 25 years ago when the store manager was marking down prices to clear stock from the shelves of the sporting goods section. I put three rounds in the pocket of my vest, pulled on a dry stocking cap, and headed for the fields, Abbey wahrling all the way.

A battered old combine, a tractor, and a gravity box wagon full of corn sat snow-covered by the cornfield a half mile downhill from the parking pull-off of the wildlife area. Apparently, the field had been harvested the previous day, which was a plus for Abbey and me. Any pheasant that had been using the tall corn stalks for shelter would now be burrowed into the clumps and thatch of the native grass plots. Not that there would be any pheasants here today.

We began our hunt by walking a quarter-mile stand of plum and dogwood and nine-bark brush along the top ridge of the WLA. No birds. Not even a whiff of scent of a bird, Abbey told me. She was not discouraged and led me down across a field terrace to the grass plots. Working into the cold northwest wind was rough on my face but a benefit to Abbey’s nose. She quartered back and forth, bouncing and happy but not birdy, and in the tall switch grass I could keep track of her only by watching for the sprays of snow she was shaking loose. Her hunting pattern became tighter, tighter, linear, and then she locked on point about 10 feet from the edge of the plot where it was bordered by shrubs and trees.

My first though was “skunk,” but her tail told me “pheasant.” Certain that it would be a hen, or pair of hens, I stepped in front of her and kicked the grass to flush the bird. A rooster the size of a Boeing 777 came squawking up to our right, slightly behind us, with flame shooting out its beak and fireworks exploding from its tail. Or so it seemed to me. Rooster pheasants are dragons.

The little single-shot gun was tucked under my arm, since I had long before decided there was no possibility of wing shooting today, and it took a few seconds of frantic activity to push it out to arm’s length, remember to cock the hammer, shoulder the stock, swing through the line of flight of the escaping pheasant, and pull the trigger. By now the rooster was disappearing into the fast-falling show, and I had little hope that the shot would connect.

Feathers flew, the bird rolled and tumbled, and it and came down in the thickest part of the switchgrass. A mushroom cloud erupted as the rooster crashed through the snow-covered tops of weeds and grass, and a gust of wind puffed the cloud away as it disintegrated and showered back to earth.

The beauty of that scene distracted me from marking the bird down properly, but I “took a line” by repeating the swing of the gun through the reimagined shot and the fall of the bird, then set out to pace off the forty-some yards that separated me from the crash site. I worried that the pheasant was not hard-hit and we would spend the next half hour in an energetic chase for a lightly wounded runner in the impenetrable cover.

Abbey was rooting under a clump of grass not far in front of me. She had obviously not marked the bird down well and had undercast on her run to retrieve. I was about to order her to search further out when her head came up and her mouth was full of red and gold and bronze feathers and the drooping green head of the rooster. I sheepishly realized that my impressive 40-yard shot was only about 30 yards, maybe less. Not that it mattered a whit to Abbey.

She handed me the bird, and we spent several minutes admiring it before I posed her and the rooster and the gun for a photograph – a ritual she detests but tolerates. I wanted this moment to last for hours, for ever really, and this was the only way to truly capture and remember it.

I took off my vest. Laid the rooster in the game bag, put the vest back on, picked up the magnificent little single-barrel hammer gun, and began the walk toward the truck at the hilltop. Abbey balked.

“No,” I said, just as insistently. “It won’t get any better than this.”

Not today, maybe not any day.

More stories about hunting, bird dogs, bird guns, and life in the North Country are published in my three collections of essays and two novels, all available through Amazon.com at  Jerry Johnson Author Page