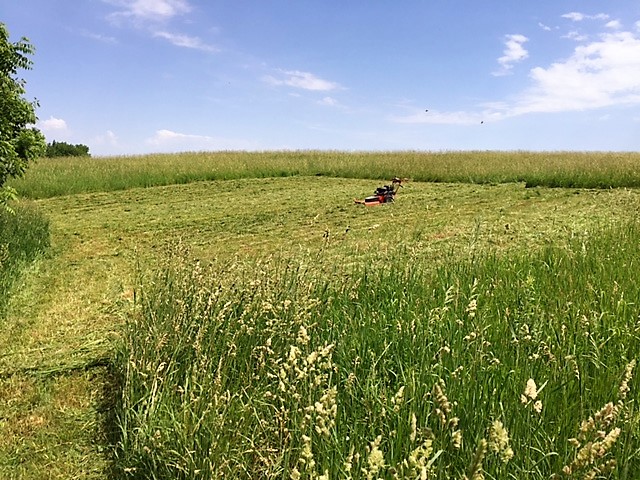 After 31 years of spot mowing for Canada Thistle, this summer there was less than a quarter acre of thistle infestation to mow. But thistles always come back. Maybe it’s time for us to get a flock of Canadian goats.

Botanists tell us that Canada Thistle (cirsium arvense) did not actually come from Canada; it originated somewhere in southeastern Europe or southwestern Asia. Personally I suspect, with no basis in fact or research, that it was bio-engineered by 13th century botanical necromancers working for Genghis Khan as part of his plan to despoil all parts of the world that he could not conquer.

Canada. I like Canada, I really do, and most things Canadian.

Through the course of its fascinating history of discovery, exploration, settlement, and development, Canada has forged a vibrant nation in a harsh land where success and prosperity (and sometimes survival itself) is based on courage, strength, daring, and common purpose. Its chronicle includes first the confrontation and clash of diverse peoples and cultures and gradually the acceptance and assimilation of all.

That has made the country an admirable place to live and an attractive place to visit. The international atmosphere and open character of Canadas’ cities surpass that of any of the dozen metropolises in the United States where we have lived or visited. After a three-week vacation that began in Vancouver on the Pacific Coast and took us on a winding tour through the Canadian Rockies I believe that British Columbia is the most beautiful place on Earth and Vancouver the best city in which to live (though frightfully expensive). My opinion may have been influenced by the seafood, neighborhood pubs, and craft beers.

I could compile a long list of positives about Canada.

Natural wonders? Niagara and Horseshoe Falls, the Bay of Fundy, Jasper National Park (and Banff and every other national park in the Rockies), the Northern Lights in the Yukon, Dinosaur Provincial Park in Alberta, and the Cabot Trail in Nova Scotia just to name a few.

Celebrations? The Calgary Stampede, the Quebec Winter Carnival, the Montreal International Jazz Festival, the Festival du Voyageur in Winnipeg, and (the one on my own bucket list) the International Busker Festival in Halifax.

Sports? Okay, curling is not my favorite spectator game, and hockey… meh, I can take it or leave it. But Canadian football is more exciting than American football (also soccer, it goes without saying), and the Toronto Bluejays are the best small-market team in professional baseball. Outdoor winter sports are ubiquitous, of course.

Friendly people? We have never had better travel experiences than in Canada, and that is in large part because the people in every city are friendly, welcoming, hospitable, and helpful.

Canada also has Public Health Care and Red Green. What’s not to like?

Well, for one thing, Canada Thistle. So many good things have come from our neighbor to the north, but I wish they had kept their thistle within their own borders. Every June and July I am on the lookout for this insurgent invader in my hayfields, and I spend hours spot mowing to eradicate this demon weed from hell.

Botanists tell us that Canada Thistle (cirsium arvense) did not actually come from Canada; it originated somewhere in southeastern Europe or southwestern Asia. Personally I suspect, with no basis in fact or research, that it was bio-engineered by 13th century botanical necromancers working for Genghis Khan as part of his plan to despoil all parts of the world that he could not conquer. And the outcome of the devious plan is still in the balance: these damned Eurasian thistles may destroy us yet.

Sometime in the 1700s cirsium arvense arrived in North American as a stowaway in maritime shipments of wheat or other grains and seeds on cross-Atlantic voyages from the Old World. It found New World soils and climates much to its liking and did its best to take over the entire continent.

Why and when cirsium arvense was tagged with the common name Canada Thistle is not clear. People were envious of all the good stuff Canada has to offer, I suppose, and wanted to smear the country’s reputation by blaming it for weed infestations. Canada Thistle does grow exceptionally well in the wheat country of Canada’s Alberta, Saskatchewan, and Manitoba provinces, so maybe that is the name association. It also grows in abundance in all the Plains States of the U.S. including those of my North Country. The only states where it does not flourish are Alabama, Florida, Georgia, Louisiana, Mississippi, Oklahoma, South Carolina, and Texas, perhaps because those states are least like Canada and maybe the most resentful.

Canada Thistle is a tough customer to control. A perennial plant, it reproduces and spreads from the vegetative buds in its root system and by wind-borne seed. A thistle has an extensive root system that makes it difficult to kill and quick to recover from mowing or spraying. I do not spray for weeds, so Canada Thistle and I are locked in deadly hand-to-hand (well, blade to stalk) combat.

Mechanical control – continual mowing – can eventually eliminate Canada Thistle the Agricultural Extension Service assures me, because it stresses the plant, forcing it to consume the nutrients in its root system which will eventually cause its death. I have been spot mowing for 31years but thistle roots can reach out as much as 15 feet horizontally and burrow down more than six feet vertically so it may be another decade or two before their root stores of nutrients are depleted.

My best hope for victory is ever-thicker and taller stands of domestic and native grasses and forbs in my fields. Canada Thistle does best on ground that has no competing vegetation to shade and choke the weed: row crop fields, overgrazed pastures, disturbed rangeland and roadside ditches, and eroded or abused marginal or abandoned land. Once a dense stand of Canada Thistle is established the stuff is a nightmare. Goats love it (and are a good method of control) but cattle will not usually graze thistle-infested grassland.

By taking just one annual cutting of hay from our fields most of the previous 15 years, and stopping all haying and grazing the past two years we have almost (knock on wood) eliminated Canada Thistle on our farm. I discovered only one patch this year, about a quarter-acre in size, and the thistle plants were scattered, not clumped. I admit I over-mowed, but 30 years ago we were using machetes and corn knives to chop down stands of thistle so whenever I see one my brain goes into attack mode and the DR Mower is my Sherman tank.

Another onset of growth will come in the fall, I have learned over the years of battle, but hopefully the bluegrass and brome will rebound quickly from this summer mowing to shade out most of the thistles that re-emerge. None of the current thistle crop had gone to seed, although a seed dropped as long as 20 years ago can lie dormant in the soil awaiting its opportunity to germinate.

Canada Thistles may still be waging their insurgent war on our farm when I become too old and feeble to do the twice-yearly spot mowing, so our younger daughter has suggested we invest in a flock of goats. I’m considering that suggestion. I have zero knowledge or experience as a goatherder, but my supposition is we should acquire Alpine, Saanen, Toggenburg, Nubian, LaMancha, or Oberhasliwe goats. Those are the most popular breeds in Canada, we have learned, and if our objective is controlling Canada Thistle by grazing, it seems the grazers should come from Canada.

More stories about life in the North Country are published in my four collections of essays and two novels, all available through my Author Page on Amazon.com Jerry Johnson Author Page