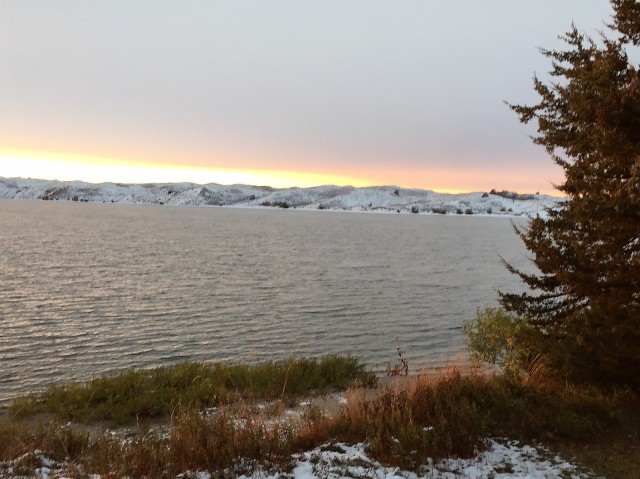 The rip-rumble of the tent flap’s zipper sets the dogs whining in their travel crates. They’ve been awake, stretching and yawning, for ten minutes or more, ever since the creak and thump of my cot-flip interrupted their sweet and untroubled sleep, but they are experienced camp dogs: the tent zipper, that’s the sound that means the hunters are alive, the beginnings of another day of dog-joy.

Left eye glued closed with gunk from seeping tear ducts and right eye blurred by its retinal blind spot, I can still see the tent wall aglow in the pre-dawn wash of sunlight the flows over the hills east of our prairie campsite. We have survived another night.

Through the window mesh I spy the last bottle of beer from the six-pack atop the Coleman stove on the picnic table, but my mind and body are not asking for alcohol; they are pleading for ibuprofen and caffeine. A few pills and lots of coffee. Strong coffee.

Three days of bird hunting and tent camping in late September – that’s my limit. This is the fourth day. Going back to sleep is not an option; I have to pee. But there is a chill in the morning air and I’m warm in my mummy bag, top cord drawn tight to close its hood over my head and across my face. Doze just a few minutes more? No, I urgently need to go, so I struggle out, arthritic hands clumsily undoing the draw cord and trying to slide the down bag’s zipper open without jamming it.

Worming out of my cocoon I tip over the cot and dump myself onto the tent floor. Cold. It’s cold. Untangled but still swearing I crawl on hands and knees to the door flap and use the tent’s brace poles to hoist myself to a semi-upright position and begin my shuffling walk to the privy. Yes, it’s a long way, but I’ve tried peeing in an empty beer bottle and one failed attempt was lesson enough. A frosty morning’s not the time to coax my aging pizzle to perform feats it could barely accomplish in its younger days.

The rip-rumble of the tent flap’s zipper sets the dogs whining in their travel crates. They’ve been awake, stretching and yawning, for ten minutes or more, ever since the creak and thump of my cot-flip interrupted their sweet and untroubled sleep, but they are experienced camp dogs: the tent zipper, that’s the sound that means the hunters are alive, the beginnings of another day of dog-joy.

I let them out. Sasha immediately heads for the grove of trees at lakeside to piddle and poo. Abbey leaps on me and sends me stumbling to crash into the table, aluminum pans and enameled steel plates and cups rattling.

On the return walk from the rest room and shower building (flush toilets, hot water – a tacit admission by the Nebraska Game & Parks Department that their clientele has grown old, old, old) I pause to watch the pale Moon set on the west side of the lake, way out there in the Sandhills. The world is peaceful and quiet. Dead quiet. I touch my ears. Of course the world is dead quiet; I’m not wearing my hearing aids.

Cy is setting up cooking gear on the camp table to fix breakfast. He’s cheerful. He’s always cheerful, but especially in the morning. In tent camp. Somehow that’s not right, an affront to the rest of us who suffer and, in a masochistic morning mood, enjoy our suffering. But we tolerate him. He cooks breakfast, after all. Pancakes, bacon, eggs over easy, good coffee. Without him we would not so much eat as refuel on these mornings. Granola bars, gritty coffee, a package of smashed and cold breakfast rolls, a Snickers candy bar, more gritty coffee. Contemplating that alternative, we can endure cheerful.

Sasha and Abbey come bounding back. They ignore the scoop of kibble I’ve put in their bowls, Abbey because she is now a veteran of four years and knows there is a long day of hunting ahead and does not want a leaden lump in her belly. Sasha because she smells the bacon grease in the skillet and hopes it will soon dress the kibble. It will, and in about an hour she will barf it all on the prairie when her body refuses to run hard and digest a half-cup of salty grease at the same time.

Sitting on a canvas stool and pretending to help with breakfast I notice my cold cigar stump from last night atop a tin can ashtray, three-quarters length and probably good for a relight and a jolt of nicotine stimulation. But I think twice. No need for Sasha and me both to barf breakfast on the prairie.

The coffee percolator has done its thing. First cup is rejuvenation of the spirit and the second, as the ibuprofen kicks in, is an easing of the stiffness in muscles and a loosening of locked-up joints. The sun is up in full, its rays warm on our faces. The dish water also warms my hands and they hurt less. Through the tent flap I see my hat and shotgun case on the cot. I believe I can bend far enough to lace my boots.

“Yes,” he says. “Last day of the hunt. We start home this evening.”

“Too bad. Too bad. Just when we’re starting to have a good time, it’s over.”

More stories about life in the North Country are published in my three collections of essays and two novels, all available through my Author Page on Amazon.com Jerry Johnson Author Page