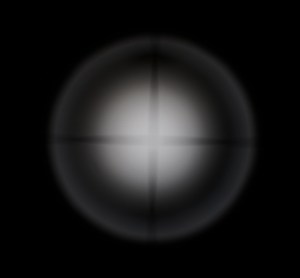 “Hell, you’re already deaf, and if you go blind, too, you’ll be useless in hunting camp.”

The buck came out of the woods downwind and behind me, the kind of unexpected appearance I should be prepared for by now, and he paused on the trail about 20 yards from my tree stand. Because there were low-hanging tree branches between us this was a shot I would usually not have attempted, but this was the only deer I had seen in three days and the bow season was nearly at an end.

When I brought the crossbow up to my shoulder and aligned my right eye with the center of the red dot scope, the red sighting dot flickered and blinked, grew blurry, and went out. I pointed the scope circle as best I could behind the deer’s shoulder and pressed the trigger. The bolt flew low, barely clipping a tuft of hair from the bottom of his chest, and he reversed course and disappeared into the brambles in seconds.

I will not report the descriptive words I used to curse my stupidity in failing to check and replace the scope’s battery before I left the clubhouse that afternoon. I peered through the scope again to confirm the battery was dead, and… I’ll be flummoxed! There was the red dot, bright and clear – because this time I was looking with my left eye.

When I mounted the stock to my right shoulder and placed the scope’s sighting dot on a blown-down tree trunk, the red dot again blinked and dimmed and went out. Weird. My right eye could not see the red dot when it was centered in the scope.

The problem of the disappearing sight dot could be resolved, I hoped, by replacing the red dot scope with a traditional scope with bold crosshairs for short-range aiming of the crossbow. I bought a scope, mounted it, took it to the shooting bench for sighting-in, and was annoyed to see a fuzzy gray circle and wriggly lines where the target’s bullseye and the intersection of reticle lines should appear in sharp focus. Adjusting the scope’s focus ring did not improve the sight picture.

Taking a receiver sight-equipped .22 rifle from the gun safe I attempted a few shots at a paper target using the peep and post. Better? No, much worse. The front sight appeared only as shadowy blob, and the bullseye of the target was even more fuzzy. Well, damn. Just… Damn!

This was my first awareness that my right eye has developed a blind spot, a scotoma caused by central serous chorioretinopathy. That is the medical term for the malady, a sort of fluid-filled blister in the lining of the retina, that is causing a blank space in the dead center of my right eye’s field of vision. Most cases gradually resolve themselves over a period of three to six months, my optometrist tells me, but it has been almost five months since the blind spot first appeared (or should I say disappeared?) and it has not improved but has become somewhat worse.

And isn’t this a fine fix for someone who hunts with rifle and crossbow?

Every few days, like a pitcher on injury rehab testing his sore arm with a couple tentative throws, I take a .22 out of the gun safe and shoot a half dozen rounds at a large black circle target on the 25-yard range. Accuracy is somewhat better than a thrown baseball, but not much.

The blind spot will not be as great an issue for wing shooting since the shotgunner keeps both eyes open and the unaffected eye compensates for the vision loss in the damaged eye. And a shotgun is pointed rather than aimed. That’s my fervent hope, anyway. When the snow and ice melt from the clay target shooting range we will test that premise.

In the meantime I have made an appointment in one month for more extensive vision testing, to be followed by a prognosis and a discussion of my medical options. Experience tells me to NOT do extensive research on the web to learn the details and complications of the progression and the cures for central serous chorioretinopathy. Whenever I do this kind of layman’s research I tend to look at the darker side (pun intended) of medical information and focus on the worst that could happen.

While I’m grumpily waiting to get back into the starting lineup, I grumble about other miseries caused by this (expletive deleted) blind spot. It is a daily irritation when I read and write, for example. A space of about three printed letters’ diameter is blotted out when reading a hard copy book with standard type size, and a couple letters are fuzzy even on a computer monitor with the “zoom” function increased to 150 percent. And I tip over coffee cups and beer mugs frequently because I miss the handle by about three inches when I reach for it. I have learned to rely on peripheral vision for this; alarmingly, objects in the perimeter of my right eye’s field of vision are in better focus than objects at its center.

There are other minor annoyances. The eye strain causes headaches, and my complaints about it cause my beautiful blonde wife to suggest I should spend more time in the clubhouse so she won’t have to put up with my whining. I’m a good whiner.

At least the Over the Hill Gang is supportive. Yesterday Fats encouraged me to follow through with more extensive vision tests and even surgery if the doctor recommends it. “Hell, you’re already deaf, and if you go blind, too, you’ll be useless in hunting camp.”

Thanks. Thanks so much. I’ll try to look at it that way.

More stories about life in the North Country are published in my three collections of essays and two novels, all available through my Author Page on Amazon.com Jerry Johnson Author Page

5 Responses to Turning a blind eye