Of trout, chubs, and shiners 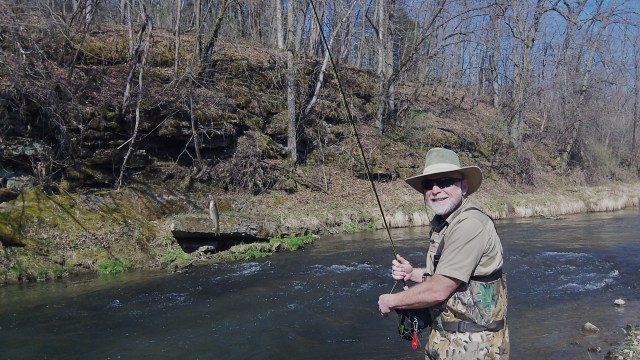 Rumor has it that I have never caught anything on a fly rod. Untrue. I have caught chubs, shiners, and once a turtle.

In a way the small brook, the pond, the river, and the sea are all the same to the fisherman. They are places for the imagination to play – a bass by every stump, a trout behind every stone, a marlin in the trough of every wave. We tie our hope to our line and send it out into the mystery water. Then we wait, boy and man alike, for the answer to the same question.
– from Giant Thoughts, an essay from the book Passing a Good Time by the outdoor writer Gene Hill (1928-97)

Of trout, chubs, and shiners

More than 40 cold water streams flow through North Country’s watersheds, gushing from the bases of the steep, rock-faced bluffs that characterize our landscape of crosshatched ravines and coolies, fed by steady and seemingly inexhaustible aquifers pooled deep within the layers upon layers of fractured limestone formations that are the bones of this part of the Earth. Most are called creeks, some are called runs, and a few earn the optimistic title of rivers, but all share similar characteristics: sheer banks, clear water, rock-strewn beds, surrounded by woodlands or pastures or hay fields, overhung by trees that have survived the assault of annual floods.

Individually and collectively they comprise a fascinating micro-ecosystem. Scorching months of summer or sub-zero weeks of winter, the fast flowing water of these streams seldom warms to more than 60 degrees or cools to less than 50 degrees Fahrenheit. This consistency makes them the natural habitat of relatively few species of fish – trout, chubs and shiners among them, but also small mouth bass, creek chubsuckers, and what appears to be a million darters – but is the perfect environment for hundreds of types of insects, amphibians, reptiles, birds, small mammals, and plentiful populations of raccoons and whitetail deer.

Cold water streams are wild and beautiful places, even where they flow through overgrazed pastures or past fields that have been plowed nearly to water’s edge in this age of industrial agriculture when many a once-cherished natural resource is held in distain by those who believe it is their right to abuse land and water. Fortunately, those scoundrels do not (yet) hold title to the majority of streamside property in the North Country where there is more than a hundred miles of trout fishing water, much of it open to public access.

So opportunity to spend a day of spiritual renewal in these outdoor cathedrals holds on. An hour’s walk along a cold water stream can lower your stress and recharge your mental batteries; I suspect that is the real reason why so many of us don waders and tote a fishing pole or fly rod down to these waters rushing through the woods. Every local hunter, hiker, and bird watcher of my acquaintance is an avid trout fisherman.

If you have any inclination to spend time in the great outdoors, trout fishing is a “given” around here. The Department of Natural Resources operates an impressive trout hatchery in our town, and rainbow trout from that facility are stocked in many of the steams, some year-round. There are also naturally reproducing rainbows, brown trout, and the rare brook trout. In accordance with the stocking operations, most of the cold water stream fisheries are put-and-take, but there are several catch-and-release creeks. Some trouters prefer to dip a salmon egg on a treble hook into recently stocked streams for a few hours to take home a limit of hatchery-raised rainbows, which are good eating. Others will go out all day with a classy fly rod, casting dry flies onto the surface of waters likely to hold a huge brown or brook trout they can land, photography, and release in the promise of another catch on another day.

Whatever type of trout fisherman you are, the local cold water streams can offer you a great experience. Consequently, no one seems to believe that I have done very little trout fishing over the course of my 30 years in the North Country. Least of all the other members of the Over the Hill Gang, all of whom have done it since they were children and are incredibly adept at the game.

They have practiced the art for so long that all aspects of it are second nature to them. They look at clouds of insects hovering at streamside and instantly select the dry fly that most closely “matches the hatch.” They tie on lures, leaders, and tippets with eight or nine different complicated knots. They effortlessly false cast until 60 or 70 feet of line is held aloft in a graceful double loop, then lay the line and fly in perfect position on the water to drift over a hole or holding spot in the current where a trout may be loafing and waiting for a meal to float by. They feel the difference between a trout’s strike and a sunken stone’s snare of a lure – and with a twitch of the wrist set the barb. They play and land a hooked trout with the syncopated rhythm and style of a honky-tonk piano player jangling a Scott Joplin rag. All with little effort and no false or wasted motion.

I, on the other hand, spend at least half my time untangling snarls in my line, retrieving my flies from the trees, brush, rocks, and sunken logs in which they have become lodged, and regaining upright posture in powerful mid-stream current after making a wild yank in response to what may (or may not) have been a trout’s strike. My casting? Sometimes the line double-loops and lays out beautifully, if not accurately, across the water; other times it piles up at my feet.

This year the OTH Gang have decided they will instruct me, seriously, in the sport and coach me to master its techniques and nuances. So far I have learned to keep my footing on slippery rocks, to wade closer to my target spot when I cannot reach it with a cast, and to bring both a water bottle and a small flask filled with schnapps. I also learned not to call a “strike indicator” a “bobber.”

Saturday the Senator made his best effort to get a trout attached to the other end of my line, without success. His follow-up e-mail message to the OTH Gang summarizes the present state of my progress. I quote parts of it here:

Well Jerry and I gave it our best the other day and I have to say that I think he is doing really well for a rank beginner. He knows from learning other sports – baseball, rifle, shotgun, bow hunting – that a sincere and sometimes lengthy investment of time spent practicing is essential. He has all the necessary physical and mental abilities and he knows that streamcraft is earned just the same as woodscraft. The creek was clear enough but running pretty high and there were almost no bugs hatching. Small flies were probably not what they were looking for under those conditions. I stuck a good trout on a streamer; Jerry was a little late in setting the hook on a strike or he would have had a chance on a nice fish.

Practice it is, then. But maybe out of anyone’s sight for the next few outings. By the end of the summer I will at least appear to be in my native habitat alongside a North Country cold water stream.

More stories about wildlife, outdoor ventures, hunting, fishing, and life in the North Country are published in my three collections of essays, Crazy Old Coot, Old Coots Never Forget, and Coot Stews , and my novel, Hunting Birds. All are available in Kindle and paperback editions at Amazon.com, and in paperback edition at the North Country bookstore Dragonfly Books in Decorah, Iowa, and through IndieBound independent bookstores.

8 Responses to Of trout, chubs, and shiners