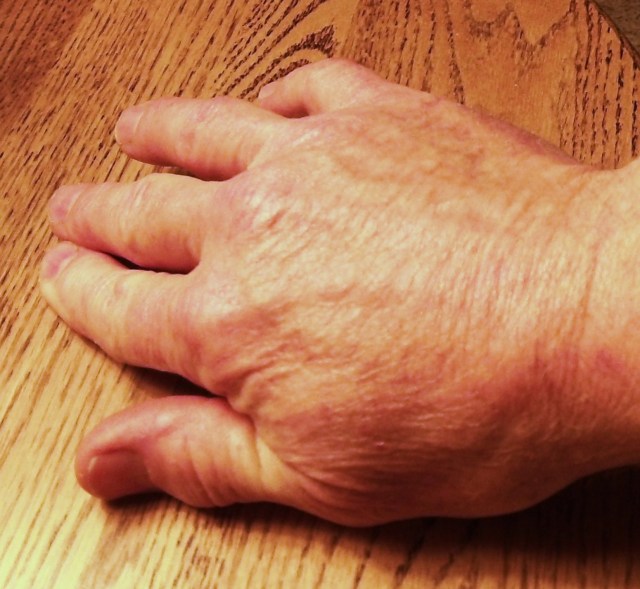 The gnarled hands of the Over the Hill Gang are cross hatched with a maze of scars, and our knuckles have been jammed and dislocated so many times they now look like badly carved dresser drawer knobs.

God will not look you over for medals, degrees or diplomas, but for scars.
~Elbert Hubbard (1856-1915), American writer, publisher, artist, and philosopher.

Each and every member of the Over the Hill Gang has taken a battering in life, leaving us all marked with an assortment of scars, blemishes, and disfigurements. Collectively, we are a sort of human Rosetta Stone that can, if you know how to read it, be used to decipher the long and convoluted narratives of misfortune and poor decision making that are the history of our hunting and fishing adventures.

The hieroglyphs chiseled into us include wrinkled toe tips lost to frostbite, ears with ragged edges where barbed fish hooks were extracted, hands cross hatched with a maze of scars that are the result of clumsy knife handling, knuckles jammed and dislocated so many times they now look like badly carved dresser drawer knobs, a fingernail that is permanently black and furrowed from a whack with a wood splitting maul, and the raised red welts that mark the surgery sites for knee replacements, hip replacements, spinal disk removals, shoulder rotator cuff repairs, arterial stent implants, and insertion of the numerous pins, wires and staples that were used to repair a diverse range of incidental injuries.

We like to tell one another, “It’s better to wear out than to rust out!” But that can be cold comfort on the mornings we take double doses of ibuprofen, rub handfuls of liniment into aching muscles, and painfully exercise creaking joints in preparation for another day of battle with the elements of nature. We are more careful to avoid injuries in our senior years, having learned through harsh experience that we can no longer jump from rock to rock across a fast-flowing stream or lift a 70-pound Labrador retriever into the back of a pickup, but we still come home from a day afield with an assortment of bumps, bruises, scratches, nicks, and cuts. As the Senator has noted: “I wouldn’t fall down so often if they would stop turning up the force of gravity in Minnesota each year.”

Although the physical scars are more obvious, we members of the Over the Hill Gang have accumulated at least as many emotional and mental scars over the years, many of them still painful. Life knocks everyone around so I don’t contend that our psychological wounds are worse than the average guy’s, and we are fortunate to have the grace of each others’ support, empathy and understanding when we have had to deal with hard times.

As you might suspect, we old coots are not given to group therapy sessions or even speaking much about our troubles or the emotionally damaging incidents of our lives. The question, “How did that make you feel?” has to my certain knowledge never been asked in hunting camp. Except as a rude joke. But venting our frustrations and anxieties about work, family, health, finances, and the myriad other stresses of life is part of what the OTH Gang is all about, especially when we partake of that bottled medicine the Senator calls Tongue Oil.

It is good to know that we are not alone on this rocky journey, especially during those times when we know our own headstrong or reckless behaviors are making the trip more rocky than it has to be. Friends are the people who love and accept you even when they know you are being a total jerk. The best friends are those who will also point out that you are being a total jerk – and tell you it’s okay to be a jerk every now and then.

On occasion one of the Gang may show off a physical scar to corroborate his rendition of a tale of calamity and catastrophe from a hunting trip long past, sometimes aggrieved but more often humorous now that the wound is healed and the pain has subsided. The emotional scars that life has inflicted on us are not openly bandied about, but they are known to all, accepted and even appreciated as evidence that we have survived the hurt and are still standing and moving forward after the battering.

It’s said that we learn more from our mistakes and failures than we do from our successes, and there is much truth to that. But we live in an overwhelmingly powerful industrial, technological, materialistic society that is callous, unrelenting, and impersonal; it is demeaning and defeating to the mind and spirit. It scars us all, badly. I think our failures and shortcomings in trying to deal with this world would ultimately be too much for us to bear if we did not have the support of friends who fight the same battles and know the emotional costs.

On every OTH Gang hunting trip there are evenings that have almost nothing to do with hunting. Those are the times we are tending to our scars. If I could grant you a Christmas blessing this year, it would be for you to have an OTH Gang of your own, friends who would accept your scars. No, not just accept them – honor them.

More stories about hunting and life in the North Country are published in my two collections of essays, Crazy Old Coot and Old Coots Never Forget, and my novel,Hunting Birds. All are available in Kindle and paperback editions at Amazon.com.