sel·fie — /ˈselfē/ (noun, informal) a photograph that one has taken of oneself, typically one taken with a smartphone or webcam and shared via social media. Usage: “occasional selfies are acceptable, but posting a new picture of yourself everyday isn’t necessary”– from Google.com definitions

Dolores (pronounced doh-lohr-us) is beautiful, shapely, and alluring, but her mania for taking these selfies and posting them where she knows I will see them is become a huge irritation. Her teasing borders on harassment.

It started three years ago when my beautiful blonde wife bought me a trailcam for Christmas. After a brief struggle to master the technology, I strapped the cam onto a tree overlooking the most-used deer trail on our place the day after Christmas and waited two days to see what wildlife images I would catch. After figuring out how to remove the smartcard from the trailcam and insert it into the correct slot on my laptop, I called up the first photo.

There was Dolores, staring into the lens. Nice doe, I thought. I looked through the rest of the images – mostly pictures of weeds waving in the wind – and erased them.

Hoping to get a picture of a nice eight-point buck that had survived the gun season, I moved the camera to the woods on the west side bluff. It was a cold week, and sitting by our woodstove in the warm kitchen was more enjoyable than hiking to the far side of the farm with a scarf wrapped around my face, so the trailcam was neglected for several days. The first sunny and windless day in early January I retrieved it, brought it home, and pulled the smartcard. 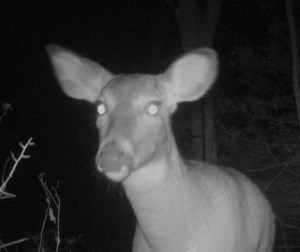 There was Dolores again, sticking her mug in front of the camera.

Well, it was that time of year when the deer begin to wander far in search of green browse, wilted clover poking through the first accumulations of snow, so I wrote it off as a coincidence. I moved the trailcam to the little patch of brush on the northwest edge of the place where a flock of a dozen turkeys liked to strut on sunny winter days.

No turkey photos, but there was Dolores.

Getting a bit testy now, I hung the cam on a big oak tree down deep in the draw on the east side of the place. The first four pictures were a coyote with two of her grown pups, a pair of squirrels, a cluster of black-capped chickadees pecking weed seeds from the snow, and a raccoon. Then… Dolores.

As a joke, sort of, I put the cam back in its first location, pointed it down the well-used game trail, and pinned a note on the tree beside it that said: “It’s still bow season, Dolores, so don’t mess with me.” The very next morning the note was gone, the trailcam had been jostled, and when I looked at the photos there was the leering face of Dolores.

This had gone far enough. That evening I sat in a tree stand, bundled in two layers of thermal clothes and insulated coveralls, bow in hand, trailcam 10 yards away. No Dolores. The temperature dropped to nine degrees. The next evening was a repeat, except the temperature was seven degrees and a brisk wind was blowing. My toes felt as though I had been forced to march barefoot for a month on Napoleon’s winter retreat from Moscow. My nose was frostbitten.

The following day I stayed home, drank hot tea with honey, and fed log after log into the stove. Bow season ended, and I took down the trailcam for the winter. I made a cursory check of the last 48 hours of photos, and… there was Dolores.

I know when I’m beaten.

Early this autumn I set out the cam again, knowing full well what would happen, and of course I captured the expected selfie of Dolores, but with a new twist. She was accompanied by her grown fawn, and the little jerk was photo-bombing in the background– making a rude face and scratching her ear with her rear hoof.

A few weeks ago the two of them were eating apples under the tree beside our house. I crept quietly out onto the deck with my real camera, but they ran off. Apparently, they only do selfies, no Red Carpet poses.

This photo game is likely to go on and on, but for now all I can say is “Here’s looking at you, Dolores!”

More stories about life in the North Country are published in my two collections of essays, Crazy Old Coot and Old Coots Never Forget, and my novel,Hunting Birds. All are available in Kindle and paperback editions at Amazon.com.