Posted on September 2, 2015 by Jerry Johnson 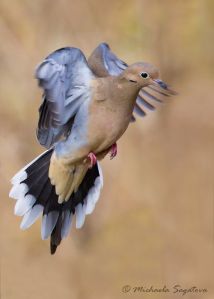 Only doves love summer and perhaps that is why I am not as fond of them as I am of other game birds. I love shooting and eating doves – just not their choice of weather.
– from Upland Bird Hunting by Joel M. Vance (b. 1934)

I didn`t hear any more from Harry until four days after the season opened, and when he called I asked him how the dove hunt had gone. “I got my limit,” Harry said. Then there was a rather long pause and Harry said “I used 108 shells. Bird of peace, hell!”
– from Bird Dogs & Bird Guns by Charley Waterman (1913-2005)

Mourning doves do not fly in heavy fog. Or if they were flying in that thick, gray haze at sunrise on opening morning of this year’s dove season we did not see them.

This was my first real dove hunt in the North Country. When we moved here more than thirty years ago Iowa did not have a dove season. Having spent many an enjoyable – well, frustratingly enjoyable –  September evening shooting doves over stock ponds in over-grazed pastures in our former home states of Nebraska and Texas, I was somewhat disappointed in the Iowa legislature’s adamant refusal to list the mourning dove as a game bird, but since my affair with doves has always been a love-hate relationship I consoled myself with the thought that some disappointments in life are actually blessings in disguise. I would no longer have the pleasure of shooting and eating doves, but neither would I have the exasperation of missing eight or ten consecutive shots at birds zooming past while my dog looked on with bemusement and contempt.

That all changed a few years ago when law makers relented and granted permission for the Department of Natural Resources to set a season for hunting doves here in the North Country. (An explanation for those who have not done any dove shooting: you do not actually hunt doves; you find an area that doves frequent, wait for them to come flying by, and attempt to shoot them, usually without much success.) But I had long since lost my passion for the sport and did not resume my dove hunting pastime except to shoot a few flying over my hayfield as part of retriever training for a new puppy. She did not like the game because the weather was hot and humid and the doves’ hundreds of small, loose feathers coated her mouth and tongue, a complaint that even my retrieving-obsessed springer spaniels used to register on evenings in a Nebraska cattle pasture.

Reintroduction to dove hunting came this year at the invitation of my friend, Steve, with whom I have traveled across five states in pursuit of feathered game. He embraced the chance to go dove shooting after it was made legal here, and he has become something of an expert at it. Since most of our state has become gigantic row crop fields, there are no stock ponds surrounded by overgrazed pastures to attract doves for their final watering of the day, so the sport requires different techniques, of which I had no experience or knowledge. Arising at 4:30 a.m. for the drive to the hunting grounds and equipped with decoys, camouflage shirt and cap, camp stool, water bottle, my aged but enthusiastic French spaniel Sasha, and a 28 gauge double gun choked improved-cylinder and modified, I was taken to a field of sunflowers on state-owned land that Steve had scouted the previous day and observed doves flocking in for their morning feed.

He was right, but opening day flight conditions were convoluted by a heavy fog that hung on well past sunrise. When doves did find their way to the field, their numbers were limited and their approach random. This was my first experience shooting doves over decoys and it was a revelation; decoys really did work, amazing well. Few doves that saw them could resist a fly-by, although usually beyond (my) shooting range. Early on I attempted two shots at birds zooming past at 35-40 yards. Forty years ago I may have had the wing-shooting skill to hit them; I no longer do. They were not injured. They were not frightened. I do not think they even realized they had been shot at. I restricted myself to birds that approached the decoys more closely.

By 9 a.m. the day had become uncomfortably warm, the doves were no longer flying in to feed, and Sasha had curled up and gone to sleep beside my shooting stool. During the course of the morning I had shot at eight more doves and knocked down five. Sasha retrieved the first one, and pointed all the others so I could come pick them up. That feathers-in-the-mouth thing.

Steve had taken fewer shots but knocked down an equal number of birds. On the walk back to the pickup we discussed that shooting anomaly all dove hunters know: a dove is either an incredibly easy bird to hit, or it is an incredibly difficult bird to hit. There does not seem to be any in-between. You are either shooting at a dove that is sauntering past at cruising speed and taking no evasive action, or you are shooting at one that is streaking past at Mach 1 while doing impossible aerial maneuvers. Depending on the situation, your percentage of doves bagged per shotshells expended can range from 90 percent to 10 percent.

I once read that a shooting preserve in Texas kept record of dove hunters’ shooting percentages over a period of several years, asking each hunter how many doves he or she shot on each visit, and how may shells were fired. The claimed percentage was almost 60, a figure that I can attribute to one of two factors: 1) most dove hunters are far better shooters than I am; 2) most dove hunters are consummate liars when asked to self-report their shooting skills. I lean toward answer No. 2, not only because I have extensive knowledge of actual numbers versus self-reported numbers claimed by bird hunters in general, but also because I have three years’ experience with the shooting claims of Texas bird hunters in particular.

And, of course, I refuse to accept that I am a below average dove shooter.

What I do accept is that I have rejoined the ranks of dove shooters and will be doing more. Partly because I enjoyed the morning’s shooting, but mostly because I enjoyed “just being there” as the sun rose on a fog-enshrouded wildlife area and a ruby-throated hummingbird arrived to hover around me and ask “What the heck are you doing here?”

So thanks, Steve, for getting me back into the dove game.