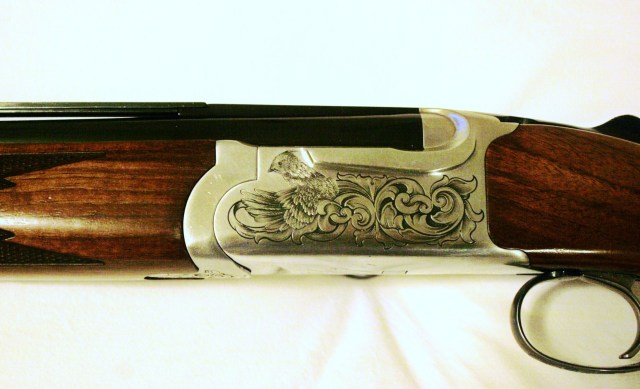 The greatest adventure in creating a bird gun that is uniquely mine was the decision to have the receiver engraved with scroll and images of game birds.

The seed of understanding true value was planted some 50 years ago, but it took a long time to germinate and a longer time to grow to fullness. Indoctrinated into the consumer society and culture, we are taught from day one that more is better, but later in life many of us learn that is false wisdom.

The reverse is true: better is more.

Summers during college years, working at a warehouse loading dock, I fell in with a group of middle-aged men who gathered together at each morning’s coffee break to share stories of their hunts of the past and their plans for hunts in the future, fascinating me with facts and opinions about game animals and guns and dogs. Infatuated with the outdoor sports but with few experiences of my own to call upon, I devoured these men’s stories with gluttonous hunger, especially the tales about their collections of rifles and shotguns. I vowed I would someday have a walnut, glass-fronted cabinet filled with a dozen different guns, each dedicated to a specific hunt: elk in the Rocky Mountains, pheasants in Dakota, kudu in East Africa, grizzly bear in Alaska, ducks along the Mississippi flyway.

Imagine my incredulity the morning one of these men announced that he had sold his shotguns, all six of them, and was using the money to buy just one: a custom English double gun. You could have heard a pin drop. This was a group of men for whom “fine gun” meant a Winchester Model 70 Featherweight rifle or a Browning Superposed shotgun. He might as well have said he was selling his Chevy station wagon and his Ford pickup truck to buy a Porsche 911 sports car.

I was unable to accept the idea that one gun could be better than six. But a few weeks later he surreptitiously brought the English double gun to the warehouse, and after work we flocked around the trunk of his car to see and handle it. The gun was like no other I had ever seen, meticulously hand-crafted, beautifully grained and oil-finished walnut stock, deeply blued barrels, case-hardened receiver, graceful, light, and dynamic. I was most impressed by the elegant checkering on the stock and forearm, and by the intricate and finely detailed engraving on the receiver, forend iron, fences, trigger guard and tang.

This custom shotgun was something so far out of my reach financially that it could never be more than a pipe dream. Buying a Winchester Model 101 over/under 20 gauge gun for a once-in-a-lifetime quail hunt in the Carolinas – that was in the realm of possibilities. A gun like this? Never.

But, as I say, the seed was planted.

For some bird hunters, and for many target shooters, their shotgun is just a tool, a mechanical device they use to knock down game birds or clay targets in the same way they use a chainsaw to clear trees and brush. In their eyes, beauty is utility, and there is some truth in that regard for a bird gun. A Mossberg Model 500 pump gun can be just as effective as a Purdey custom double, and who is to say that one lends a greater sense of enjoyment to the hunt than the other?

Most of us bird hunters, however, reach that time of life when we do take greater enjoyment from a day in the field with a gun that is something other than the mass-produced, run-of-the-mill, off-the-shelf model. For those few with the wherewithal, a custom gun built specifically for them by one of the “name” gunmaker firms in England, Spain, Italy, or the United States becomes their dedicated bird gun. The rest of us tend to find a factory-made gun we like and then do a lot of tinkering with its fit and appearance to make it unique – to make it our own.

That was my purpose when I set about making a Ruger Red Label 20 gauge sporting clays model shotgun into my own dedicated bird gun. This Red Label was not exactly ordinary when I acquired it 17 years ago, since it has some novel features and only a few of this particular model were produced, but it is by no means a fine gun or a custom gun. It is a solidly made over/under with the beautiful lines conceived by Bill Ruger during the years when he was changing the American gun industry with his radical ideas for designing and producing sporting firearms. (Unfortunately, the firm that bears his name has now degenerated to primarily manufacturing the abhorrent paramilitary black guns that are the antithesis of Bill Ruger’s hunting firearms’ graceful lines.)

Adjusting the stock to better fit my body and shooting style was easy, just a bit of shaving, sanding and shimming the wood of the buttstock where it joined the receiver. I also removed the recoil pad and replaced it with a much thinner leather butt plate to shorten the length of pull to my dimensions.

The greatest adventure in creating a bird gun that is uniquely mine was the decision to have the receiver engraved with scroll and images of game birds. I wanted the gun to be a piece of striking artwork as well as a tool of useful function. Also, I have this fanciful belief that imbuing a gun with these images, talismans of the hunt, is good medicine; I will shoot it much better because it will fit me spiritually as well as physically.

The metalwork of this model of Ruger Red Label is cast stainless steel, and when new was smooth and featureless: no engraving, no etching, no ornamental screw heads – completely undecorated and unmarked. A blank slate for the engraver. But where and how would I find the right engraver?

Serendipity, of sorts, came to my rescue when a former student and friend of mine, professional photographer Aaron Lurth, mentioned that his younger brother, Mitchell Lurth, was completing his training and apprenticeship as an engraver and was doing some awesome work. He had engraved a couple rifle receivers and handguns with American scroll, but as yet had not attempted game scenes on a shotgun. I looked at examples of his work and had no doubt he was the engraver I wanted.

We met at his shop in Marion, Iowa, and discussed the project. Because this Red Label has made a few trips north for ruffed grouse and woodcock hunts in Minnesota, I wanted images of those birds incorporated into the design. Mitchell explained how he could work those into an American scroll pattern. He also suggested engraving my monogram on the bottom of the receiver.

Here is Mitchell’s synopsis of the project.

For the design of this shotgun I chose to use traditional American scroll. This means that the background of the scrolls are cut out and blackened. This also means that the leaves of the scroll are large, rich, and full of shading. This happens to be my favorite type of scroll to use because I love how the shading makes the leaves really pop out. I kept the same scroll design throughout the piece.

You can see how each element of the gun matches another with the style of leaves and the single extending leaf at the end of the scroll. 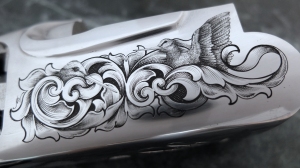 Engravers might be interested to hear that I only used one geometry of graver for this piece. I cut the whole thing using a carbide V-point 120 degree graver.

The finished work is an absolutely stunning piece of art, as shown in the photos that accompany this blog, and if the birds are not 100 percent anatomically correct only an ornithologist would be able to point out any faults.

When I take this gun to the north woods next fall, I am convinced that grouse and woodcock will fall like rain to the magic powers of its talisman images. Maybe. At the very least, my hunting companions will admit that I have the most beautiful bird gun they have ever seen.

It took several decades for the seed to sprout and grow and come to fruition, but now I truly understand. Holding this gun in hand, looking forward to fall days afield, I realize that more is not better. Obviously, better is more. Much more.

To anyone who desires a unique bird gun of his own, I recommend Mitchell as the artist to do the engraving. Contact him at Philips Diamond Shop, Marion, Iowa, telephone 319-377-1899.

4 Responses to Better is more