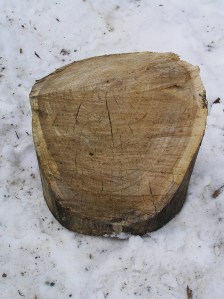 Landmark events of life seem static and dull and almost banal printed in ink on the page, but they are vivid and vibrant and alive when etched in the heartwood of a red elm.

…it is a sort of April-weather life that we lead in this world. A little sunshine is generally the prelude to a storm.
– William Cowper (1731-1800) English poet
and hymn composer

April is winter’s wild card. This past week, trying to stack the poker deck in my favor before we play the game, I was dealt a card I did not expect. Hidden in the rings of a newly felled tree was an ace of hearts, a twenty-nine-year-old love note of sorts from this reclaimed farmstead where we live.

Let me explain. After thirty winters in the North Country we know the month of March, that raucous, heartless wench, will treat us badly, taunt and abuse us, and try to crush our spirit with two or three end-of-winter storms. But April? We can never let go of our hopeful fantasies that April, who can be a graceful lady, will be warm and welcoming this year.

Nevertheless, I spent a fair-weather winter day cutting, hauling and stacking firewood. There’s more than enough under the tarps in the north yard to get us through March, but we want a little cold-shoulder insurance just in case April shows her witchy side. Having played the role of April’s fool too many years, I’m not taking any chances.

A two-year-dead red elm tree on the east edge of the farm yard caught my eye several weeks ago. Elm is the primary source of firewood on our land because elm trees are doomed to grow prolifically and die young. When an elm trunk reaches about ten inches diameter its bark is sufficiently thick to attract Hylurgopinu rufipes, the elm bark beetle that bores into the tree and infects it with the fungus Ophiostoma novo-ulmi, Dutch elm disease, which kills the tree over the course of several years. But during their short lives elms produce thousands of seeds and spike up ‘suckers’ from their root systems, procreating future generations of trees – which are also doomed.

Throughout our woodlands there are several dozen dead elms that could provide this year’s April insurance firewood but this particular tree was the leading candidate, standing bare-branched and shedding its bark in the fifty-foot wide strip between the lawn and the woodland that we call the transition zone. We chop down all the undergrowth in the zone once each summer with the DR Mower, but by fall the wild raspberry, grapevine, beggar’s tick and burdock have come surging back to reclaim the ground. A no-man’s land in the perpetual war between grass and brush.

This red elm was close to the house, appeared to be easy to take down, and was perfect size: only the rounds cut from the bottom three or four feet of the trunk would need to be split to fit through the wood stove’s door. Splitting elm with a maul and sledge hammer is not something I like to attempt in an ice-covered yard, even on a sunny day.

Using a pair of come-along pulleys and a couple fifty-foot lengths of rope, I was confident I could fell that elm into an open space in no-man’s land and not have it snag in the top of the walnut tree beside it. Overconfident as it turned out because, dang, the top branches did get tangled. I had to do some careful repositioning and tightening of the come-along cables and make a second cut through the stump with the chainsaw to bring it down.

When the tree crashed down the final ten feet or so and the excitement was over, I set the saw on the stump and noticed that this tree’s growth rings were really prominent. Maybe it was just the bright winter sunshine, but the contrast between the light brown rings of early summer growth and the dark brown rings of late summer growth was unusually clear and stark. I counted the annual pairs of rings: twenty-seven.

I was refilling the saw with fuel and chain-and-bar oil when the math finally hit me. Twenty-seven growth rings and dead two years? This red elm tree had emerged from the ground as a sapling the very same summer we moved into this 100-year-old log farm house with three children, two dogs, one cat, a rear-wheel-drive car and pickup, big dreams, and boundless naiveté.

Running a fingertip across the concentric circles, from the innermost to the outer rim, I could match years and events on our farm and in our lives to the growth of this tree:

– the narrow rings that marked the two drought years when we unwisely planted 600 white pine trees, all but 12 died and those in turn were eaten by deer

– the first deer I killed with a bow, and the next day’s hunt for all the gear and equipment I lost in the excitement

– the hot July when the well pump pumped its last, and we had to have the whole well re-cased and rewired when the new pump was installed

– the May we had the farm surveyed in preparation for a forestry improvement project, and I decided to fix all the fences, too, and somehow survived

– the year I took leave-of-absence from my “day” job to write a novel, and utterly failed

– the winter, nine years later, when my first novel was published

All these landmark events of life seem static and dull and almost banal printed in ink on the page, but they are vivid and vibrant and alive when etched in the heartwood of a red elm that sprouted and grew and thrived and died in the rich soil on the edge of the farmyard, witness to the history of our family in this place.

Kneeling beside a notched stump, in the bright winter sunshine, I decided to devote the rest of the morning to reading April’s most unexpected wild card –an ace of hearts. So lucky to have played the game though all these years.

More stories from the North Country are published in my collection of essays, Crazy Old Coot, and my novel, Hunting Birds. Both are available in Kindle and paperback editions at Amazon.com.