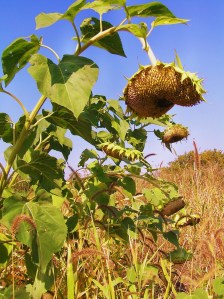 After the first hard frosts in the North Country the sunflowers on the edge of the garden can barely hold up their heavy heads.

Waking to a frost-covered world on the first true day of autumn is like coming home after a long, lonely trip. Although I have, in fact, not left the farm through all the sweltering dog days of August, on this late September morning as I watch the sun rise over a white-coated hayfield and woodland, grass and leaves curled and made brittle by a hard killing frost, I can feel my soul filling up to bursting with that same sense of serenity and contentment that surges through me at the moment of homecoming after a long absence. I suddenly realize I am being healed of a bout of homesickness that I didn’t even know I had, and a troubled corner of my mind tells me “At last, we’re back here where we are meant to be.”

In early fall the North Country is as it ought to be, full of promise and excitement. For me, these first frosts are a powerful medicine, healing aches and pains and anxieties. For some reason, I am always in excellent health when bird season opens. I’m not sure of the exact ingredients of fall tonic, but it includes, crisp corn leaves, bitter hulls of over-ripe walnuts, wet dog hair, smoke from brush fires, sap seeping from newly split elm logs, squirrel tails, water-proofing wax for boots, gun oil, sunflower seeds, moldering oak leaves, woodcock feathers, wrinkled apples, deer antlers, wool socks, and Octoberfest ales, all mixed together in a huge kettle under a starlit and crystal clear night sky while the benevolent witches who blend this elixir sing my favorite 1960s tunes.

Walking the dogs on frosty September and October mornings adds to the wonder of the season, in part because the fall tonic makes them almost crazy with excitement and eagerness to hunt birds, but also because of the seasonal transformation of the scents of the fields and woods. The distinctive aromas of autumn are just – well, distinct. More than one person has suggested that I spend so much time with dogs that my sense of smell is beginning to assume canine character. Maybe so. If you were to place me, blindfolded, on any part of the farm at midmorning in fall, I think I could tell you, “We’re at the birch thicket” or the blackberry patch or the maple woods, or wherever. Each has its own unmistakable scents.

The almost overnight coloring of the woodlands is not so much a result of the hard frosts as it is evidence of the shortening length of the days, a forester told me. But whatever the reason for the leaves giving up their hundreds of shades of late summer green and taking on the bright red, yellow, and russet hues, I am awed and thrilled by this gift wrapping of the birthday present of a new season.

Box elder “helicopter” seed pods come showering down by the thousands in each gust of wind, and the constantly falling white elm leaves often seem to be spotted with small purple bruises, as if each had taken a personal beating from Jack Frost. The walnut trees are the first to go winter bare, followed by the aspens and birches, the box elders, the soft maples, and the elms, and the few basswood trees. The Norway maple in our south yard will keep its yellow-gold leaves almost until the snowfall, and the white oak and red oak trees will stubbornly cling to theirs through the entire winter.

All the trees are shedding their leaves earlier than usual this September, and I wonder if this is because it has been a record-setting year for precipitation in our part of the country. Adding the daily figures in the rain gauge shows that nearly fifty inches of rain fell on the farm from April through September. Add a few inches to account for the heavy snows of January through March, and we have had by far the wettest year in the thirty we have lived here.

A practical benefit of this early defoliation is that squirrel watching becomes much easier. I sit out among the walnut and hickory tree-covered slope of my neighbor’s hillside woods several afternoons each fall, .22 rifle in hand, but it has been many years since I actually took a shot at a squirrel. Last September a twelve-point whitetail buck, rags of velvet still hanging from his antlers, walked by me up wind, not more than ten yards away, never noticing me until the imp in me yelled “Boo!” while he was single-mindedly searching the trail for doe scent. He left getaway tracks three inches deep in the soft loam of the forest floor.

One of the most cherished homecoming rituals of early fall is the evening that the first fire is lighted in the woodstove. The warmth and glow and scent of that first fire of the season is a reward for the many, many summertime hours spent cutting, splitting, carrying and stacking firewood in preparation for the winter. Not to mention the chore of cleaning the chimney, stovepipe, and firebox. Then wiping everything down with stove black so that it all looks like something out of Country Living magazine, for about a week anyway. It’s all worth it on those chilly mornings that I slip my feet into warm boots that have set by the stove overnight, and on those evenings when I listen to the dogs snore and moan as they sleep on the floor, drying off after a wet day’s hunt.

Winter is time for the soul to hibernate and retreat from the world for a while. Spring is for awakening and setting out on the year’s journey of work and travel. Summer is a travail of work and labor, not drudgery exactly, but a season of long days and demanding hours.

When fall arrives, it is time to come home. This is my season of fulfillment and contentment and self-awareness. There is a wonderful world out there for the next few months, and I want to savor every day of it.
_____________________________________________________
If you enjoy reading pieces posted on my blog, Dispatches from a Northern Town, you may like the collection of essays in my book, Crazy Old Coot, available in paperback and Kindle editions at Amazon.com.