Posted on September 6, 2014 by Jerry Johnson 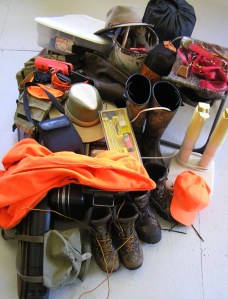 After years of experience, I now take only twice as many things as I could possibly use on a hunting trip.

It is utterly false and cruelly arbitrary to put all the play and learning into childhood, all the work into middle age, and all the regrets into old age.
– Margaret Mead (1901-78), cultural anthropologist

The anthropologist Margaret Mead once wrote that men are happiest when they are setting off on a hunt. Although Mead recorded this observation while she was studying the cultures and customs of primitive tribes in the tropical rain forest regions of New Guinea, she would likely have come to the same conclusion if she had investigated the habits and behaviors of the Over the Hill Gang, a semi-civilized tribe of the North Country.

We all suffer from opening day euphoria, a condition characterized by delirious happiness when setting out on the year’s first hunt. One pre-dawn morning, while we packed gear into the back of my pickup minutes before departing for Dakota, the wife of one OTH Gang member scolded, “You are all acting like giddy schoolgirls!”

I prefer to think that we were acting like joyful Papuan cannibals, but her behavioral evaluation was probably closer to the mark.

When we begin our annual trip west for the season opening bird hunt I am trembling and pacing with excitement, even after fifty years, intoxicated and overpowered by that exhilarating burst of adrenalin-fueled and endorphin-boosted exuberance. The dogs are on the edge of control, ignoring commands, running  wildly, refusing to eat, wrestling, pee-ing at my feet every five minutes, and jumping in and out of the pickup cab that some fool has forgotten to close. I get short-tempered with them but cannot be too severe; they are, after all, taking their cues from me.

For the previous twenty-four hours I have been monomaniacally checking the packing list, dashing from the house every half hour to sort through the pile of gear stacked on the garage floor to make sure I have not forgotten anything. After years of experience, I now take only twice as many things as I could possibly use on the trip. I used to take three or four times too much. It is unnecessary, I have learned, to pack six boxes of shotshells for a hunt on which I will shoot, at most, twelve sharptail grouse. But there again are the half dozen boxes in a row, two of 20 gauge, two 28 gauge, and two 16 gauge. Right beside the three shotgun cases. Yes, I’m taking all three, and I don’t want to discuss it!

On more than one occasion my better half has expressed her amazement that I can turn what should be a relaxed hour of preparation for a four-day hunt into a clinical experiment in atypical manifestations of obsessive-compulsive disorder. Based solely on her thirty-plus years of study of child behavioral development. Well, elementary school age children do not go grouse hunting on the short grass prairies, so the comparison of my frantic activity to OCD is deeply flawed.

There is a unique bonding experience among the OTH Gang in the minutes immediately before departure. Hurriedly gulping down final cups of coffee, we are at that moment when all gear and supplies have been packed into the trucks and the dogs loaded into the travel boxes. As the first light of dawn appears on the horizon we go over the road maps, confirming our travel route as if we have not made this trip a dozen times before. The only real decision to make is where we will stop for breakfast.

We are dressed in orange-trimmed and vent-backed shooting shirts, whistles hanging on lanyards around necks, boots smeared with a fresh coat of water-proofing oil and laced up tight, the pockets of our cargo pants bulging with folding knives, compasses, maps, gloves – although we will spend the whole day driving and not set foot on the hunting grounds until tomorrow.

Margaret Mead was right: these September days spent in anticipation of the upcoming hunt may indeed be the happiest time of the year for me, a member of the tribe. And I am taking her advice, unabashedly, to put lots of joyful play time into my middle years so that I will have fewer regrets in my old age. As the days grow shorter, the nights cooler, and the dogs evermore restless, I am feeling again this year the exhilaration building up in my heart and soul, waiting to burst out into opening day euphoria.

I have learned to cherish this time. As much as the days spent walking behind great dogs in beautiful country, they are the best memories of the hunting life.