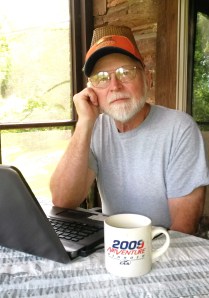 “The man who has no imagination has no wings.”
– Muhammad Ali, world champion heavyweight boxer (born 1942 )

Maybe this is all in my imagination.

Retired after a forty-five year newspaper and public relations career, I had to write something. So I launched a blog six months ago.

I doubted anyone would actually read these essays. Not as blog posts, anyway. The goal was to write for a year and compile a few dozen of the pieces into a book of essays on bird hunting, bird dogs, bird guns, reflecting on the friendships, emotions and traditions of the sport.

Over the past couple years I wrote two novels too, and self-published them. They are not on the New York Times Best Seller list.

But someone apparently did read them, and also read my blog. And wrote an article about me for publication in a regional magazine, Inspire(d).

The web version of the magazine is here:

I’m flattered, but worried this could ruin my reputation as a curmudgeon.

The paperback editions of my two books are available at Dragonfly Books and the Luther College Book Shop in Decorah, Iowa.

Click on the titles below to find them at amazon.com, in both paperback and Kindle e-book editions.

Hunting Birds: The Lives and Legends of the Pine County Rod, Gun, Dog and Social Club

I imagine they will create one.