I hope the day will be a lighter highway,
For friends are found on every road.
Can you ever think of any better way
For the lost and weary traveler to go?

It seems to me a crime that we should age,
These fragile times should never pass us by.
A time we never can or shall erase,
As friends together watch their childhood fly

Making friends for the world to see.
Let the people know you got what they need.
With a friend at hand you will see the light,
If your friends are there then everything’s all right.

– From the song ‘Friends’ by Elton John

Once upon a time…

We were all going to be great writers: Donald Borchert, the novelist; Michael Shelton, the poet; and me, the short story writer. We were in college, The Ohio State University, and we lived in a duplex on Eleventh Avenue, about four blocks east of the OSU campus.

Those were wonderful days, wonderful in the sense of filled-with-wonder, not necessarily in the sense of fun-and-frolic. It was that era called the Sixties, the decade from about 1964-74 when the myth of America as the “good nation” was exposed as a hoax and the country came apart at the seams.

I cannot pretend to put into words the Alice-in-Wonderland madness of that time and place. The cliché, “You had to be there,” is valid. So is the saying, “If you remember the Sixties, you probably weren’t there.”

We were overwhelmed by a torrent of social and political revolution and reaction, truth and lies, peace and violence, courage and fear, love and hate, loyalty and betrayal – an endless storm of events and emotions wild, exciting, illuminating, sexy, fantastic, exhilarating, heartbreaking, and savage The things we did, the thoughts and passions we shared – crazy.

We three were joyfully thrown together in that gonzo, directionless, psychedelic, free-fall, noisy, multicolored, ployglot circus parade. We drank beer and wine, smoked cigars and weed, sang and laughed a lot, hollered some, and cried a little. We had us a time.

And we all became great writers. Prolific, incredibly talented writers. Donald, a novelist and published memoir writer (Free for All – Oddballs, Geeks, and Gangstas in the Public Library); Michael a poet who produced an epic masterpiece and thousands of free verse and lyric poems; and me, who wrote hundreds of short stories in the form of newspaper columns and features. We achieved our goals of greatness and fame; it’s just that few people know of us.

Back in those youthful days, when we were all writing furiously with naïve confidence and faith, I wrote a novel of sorts. It was a children’s book titled Scrawny Dog, Hungry Cat, and Fat Rat – A Tragedy for Children. You can probably guess the people on whom the three main characters were loosely based.

After pitching the manuscript to publishers for a couple years with absolutely no success, I put the raggedly typewritten pages in a manila envelope and packed it away with the ubiquitous boxes of stuff-that-doesn’t-matter-anymore. Somewhere in household moves around the country to different newspaper jobs – Ohio, Nebraska, Texas, Iowa – it was lost. Donald went to Los Angeles and Michael went to Detroit, so those links to the Sixties were lost, too. It was time to move on. As Longfellow, a fair poet himself, wrote, “Let the dead past bury its dead!”

But sometimes spirits come back to life. Donald and I were in touch now and then over the years, and about a year ago we met for lunch in LA where I had a five-hour layover on a flight to Japan. We were both old and had grown children and were peacefully content in lives that had been knitted up over the years into comfortable if rather shapeless and drab cardigans. 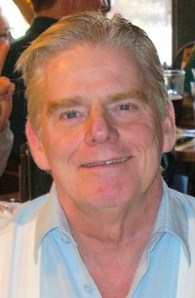 Then unexpectedly, a couple years ago, Michael reconnected with me via a telephone call. He was back in Ohio. He was going through some hard times with alcohol and prescription drug dependency. He had a number of medical and health problems as well. His life was not peaceful, content, or comfortable. Always a sensitive and empathetic and compassionate person, he was also suffering emotionally; this era is not a good place or time for people who are gentle and loving and vulnerable and caring. The ways of this world made him hurt.

On my visits back to our Ohio hometown over the next two years we met four or five times – lunch, coffee, hours of reminiscing and catching-up. During an August 2013 visit he recalled a line from the Scrawny Dog, Hungry Cat, and Fat Rat manuscript, and he asked me what had become of it. I told him I had lost it.

“I think I have a photocopy of it in my files,” Michael said. “Let’s drive over to my place and see if I can find it.”

A half hour later, he was handing me an envelope that contained a ninety-page photocopy of the final draft of the manuscript I had written in those tumultuous days of the Sixties. I leafed through those faded pages of text written when I was eighteen or nineteen years old. Michael had kept that manuscript forty-five years. Damn.

I did. There were no major changes, but it seemed wise to correct a number of minor inconsistencies: a cup of coffee no longer costs a nickel, for example, and no middle school-age kid today would have the foggiest idea what coal oil is, or a pocket watch.

In November, when I returned to Ohio for a Thanksgiving family reunion, I met again with Michael and gave him a copy of the rewritten manuscript. I told him I would e-publish it on Amazon-Kindle as soon as I had some illustrations completed and found someone clever with technology to do the design and layout. He was happy I was doing that, and he said he would read the revised manuscript the next day.

Shortly before his death he had written a final poem. It was a farewell message to Donald and me. The poem said, in essence: “I cherish the time we had together. I love you two, and I miss you.”

Me too, Michael. I’m just not poet enough to know how to say it.

The book is ready for publication now. The dedication page reads:

This book is dedicated to
C. Michael Shelton (1948-2013)
A poet, gentle spirit, and
the best Cat a friend could want