Snowshoes of white ash and rawhide 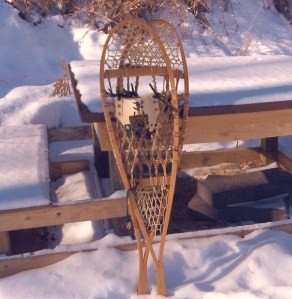 After 25 years of use, these traditional snowshoes, made of white ash and laced with rawhide, are still in good shape. This is the Michigan or Huron style snowshoe. Today’s snowshoes are high-tech, made with tubular aluminum frames and thermo-rubber decking, and equipped with integral bindings and crampons. I can trip and fall equally well in all types and styles.

Snowshoes of white ash and rawhide

Life in a northern town begets a love-hate relationship with snow.

I’m not talking about those snow skiffs and sprinkles that dust the streets and lawns of more southern locales, providing residents with a day or two of holiday season décor and then melting away. No, I am talking about the parts of the country where a December-through-March series of Arctic air mass storms dump weekly deliveries of snow that accumulates to 20, 30, 40, 50 inches and more. That’s in the flat snowfall areas; the drifts get seriously deep.

Roads and driveways must be plowed, sidewalks must be shoveled (unless you’re just made of money and can afford a snow-blower), vehicles are buried under rolling mounds of white, house and garage roofs creak under the weight, and incipient avalanches overhang the eaves, patiently awaiting victims. The car is in the ditch, the front storm door is blocked, the firewood pile is entombed, and the grandchildren’s sleds are lost until April. All this misery creates a certain attitude about snow: hatred.

But… the day is perfect for snowshoeing.

Do not go out the day of the storm, of course, unless you want to be featured in a CNN website news item, illustrated with a poorly reproduced scan of your driver’s license photo and the caption “stupid person” beneath it. No, wait until the storm has passed and the northern world has that “first day of the dystopian future” landscape of endless, trackless, merciless snow. Then buckle on your snowshoes and head out. Seriously.

I love snowshoeing. There was a time in my life when cross country skiing inspired fantasies of zooming over rugged snow-covered terrains, perhaps triggered by those romantic LIFE magazine photos of soldiers of the U.S. Army 10th Mountain Division schussing down rocky slopes on limber skis to outflank the Nazis in the Bavarian Alps, rifles and packs strapped to their backs and ski poles tucked in tight.

But my attempts to emulate them resulted in dramatic falls, even without pack and rifle, and I learned that cross country skis are not the best conveyance through second-growth woodlands in the North Country. I also learned that when you unexpectedly go over the brink of a steep slope, you are no longer cross country skiing but are instead downhill skiing — a bad choice in woodlands filled with snow-covered brush, stumps, tangles, and rocks.

Fortunately, the skis were rentals.

Snowshoeing is more my speed, figuratively and literally. When you change directions on snowshoes on a wooded slope, the moment of decision and the moment of commitment are separate; on skis, they are one and the same. When you fall down wearing snowshoes, you get back up. When you fall down wearing skis, you prepare a plan of how to get back up, and then you cautiously execute it. You may have to go to plan B.

Although you will want to don snowshoes as soon as snow accumulation makes walking in boots strenuous and tiring, perhaps only a foot or so deep, shoeing gets better and better as the snow gets deeper and deeper. Once snow depth surpasses three or four feet, most obstacles to your hike simply disappear. That includes fences, fallen trees, stumps, wild raspberry thickets, jagged rocks and boulders, and the occasional abandoned snowmobile. One the other hand, deep crevices and the edges of bluffs also disappear from sight, and you can pitch over unexpectedly.

Do not push your pace. Walk with a slow but steady gait, and stop for a few minutes rest if you become breathless or break a heavy sweat. Inhaling deep drafts of sub-zero air is not good for you. Neither is being soaking wet with sweat when you are a few miles from heated shelter on a minus 10-degree day.

I sometimes take my dogs along on a hike, but when they tire of bounding through the snow they take the easier route of walking in my snowshoe-packed trail. Every 50 yards or so, one of them will step on the tail or the rear decking of my snowshoes, instantly forcing me to do an imitation of a drunken tap dancer attempting the buck-and-wing move on a stage covered in molasses. You may be able to remain upright. I seldom do.

More importantly, take a camera and binoculars. Best to wear a coat with large outside pockets to store these so the lenses remain snow and ice-free. Inside pockets are no good; your body heat will warm the lenses and they will steam up, then frost over when you take them out. You will want them ready, and clear-lensed, because you are going to encounter some beautiful winter scenes and, surprisingly, a lot of wildlife. Although a woodland walk on snowshoes is pretty noisy, I frequently get close to all kinds of creatures. Dozens of species of songbirds, of course, and the usual cast of squirrels, rabbits, and raccoons, but also those critters that are normally more shy and evasive: deer, turkeys, coyotes, owls, eagles, hawks.

I can’t explain this. Perhaps the conversation in the winter deer yard is something like: “Hey, Ed, there’s a man walking towards us about a hundred yards to the west!” “Carl, you dope, he’s on snowshoes. Do you think he’s going run over here and catch us?”

Snowshoeing is also one of those outdoor activities that are even more fun if your spouse and/or children go with you. Friends are okay, too, but it’s a guy thing to want to play touch football on snowshoes. Wonderfully macho-camaraderie-male bonding, but hard on equipment and even harder on bodies. Friendships are not strengthened by three-mile walks on broken snowshoes with sprained knee.

So when the snow piles up this winter, get yourself a pair of snowshoes and go out into the woodlands (or the grasslands, if the wind is not too vicious) for a beautiful hike. There are thousands and thousands of acres of state, federal and county areas open to snowshoeing, and you may also know of private land you would like to walk (always ask permission).

One final tip: do not strap on bear paw style snowshoes until you have mastered the basics of the sport. Yes, they are a bit lighter and more maneuverable, but… just don’t.

2 Responses to Snowshoes of white ash and rawhide